Man Dies After Taser Struggle with Maui Police, Cause of Death is Undetermined 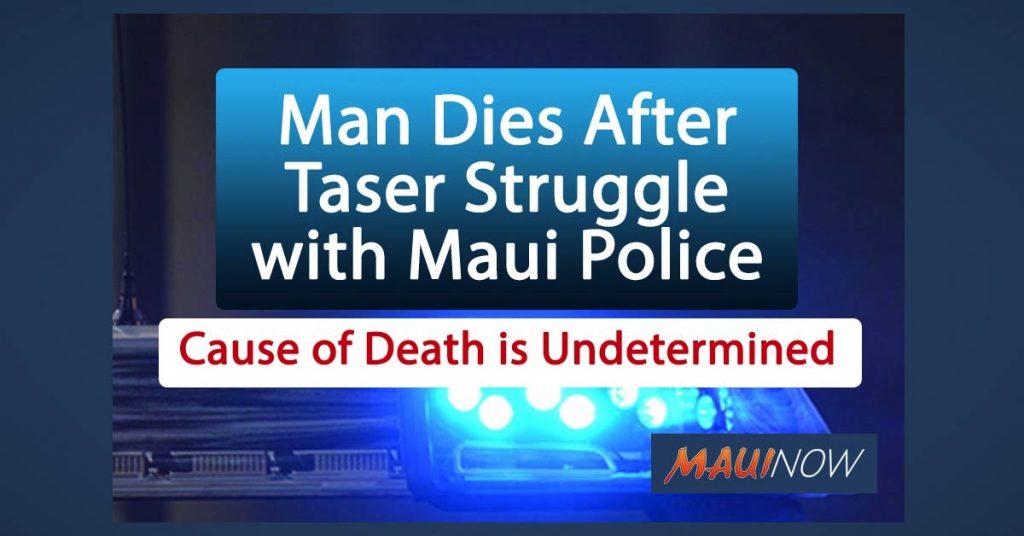 A 30 year-old Massachusetts man is dead following a taser struggle with Maui police in which he allegedly disarmed an officer of a Taser and proceeded to use the device on three different officers.

Police say Maurice Abisdid-Wagner sustained “superficial wounds” from the struggle.  He was transported to the Maui Memorial Medical Center Emergency Room for an evaluation and died several hours later.

An autopsy was conducted on Monday, July 27, 2020, and the cause of death is listed as “undetermined.” The coroner is awaiting toxicology results; however police say a preliminary toxicology report revealed that the man had amphetamine and THC in his system.

The man has since been identified as Maurice Abisdid-Wagner. Police say contact was made with the man’s next of kin today.

Below is a rundown of the incident:

Kīhei Patrol officers responded to a harassment (via social media) type of case in Māʻalaea at around 12:23 p.m. on Sunday July 26, 2020.

While police were en-route, the caller identifying himself as, “Reece Watwhit,” later identified as, Maurice Abisdid-Wagner, 30, of Massachusetts, called dispatch numerous additional times.

On one of the calls Abisdid-Wagner indicated there was a person with a firearm trying to break into the residence and also added that there were three to four people there trying to kick in his door.

When officers arrived, police say they did not locate anyone on the property with a firearm trying to break in. Instead, they were met with the owner of the unit, who indicated that his guest, Abisdid-Wagner had locked him out of his own unit. According to police reports, the owner was pounding on the door telling Abisdid-Wagner to let him back in, when officers arrived.

Police officers made contact with Abisdid-Wagner in the unit and noted that he was “sweating profusely and speaking rapidly.” Police say Abisdid-Wagner was also “uncooperative” and his movements were both “erratic and aggressive.”

As a result, officers requested medical support for Abisdid-Wagner, but medics were unable to assess his condition because the man continued to be uncooperative, according to police reports.

“Officers attempted to corral Abisdid-Wagner away from the kitchen area, where kitchen knives could be reached,” according to a department press release.

A struggle reportedly ensued between Abisdid-Wagner and officers. In attempt to subdue him, one of the police officers reportedly used his Taser to gain compliance.

The officers were able to subdue Abisdid-Wagner and arrested him for the offenses of first degree robbery, three counts of assault against a police officer and disorderly conduct.

Police say the man sustained “superficial wounds” from the struggle.  Because of his behavior, Abisdid-Wagner was transported to the Maui Memorial Medical Center Emergency Room for an evaluation.

Transport to the hospital was completed at about 1:30 p.m.; and at 5:52 pm, while at the MMMC, Emergency Room, Abisdid-Wagner was pronounced dead.