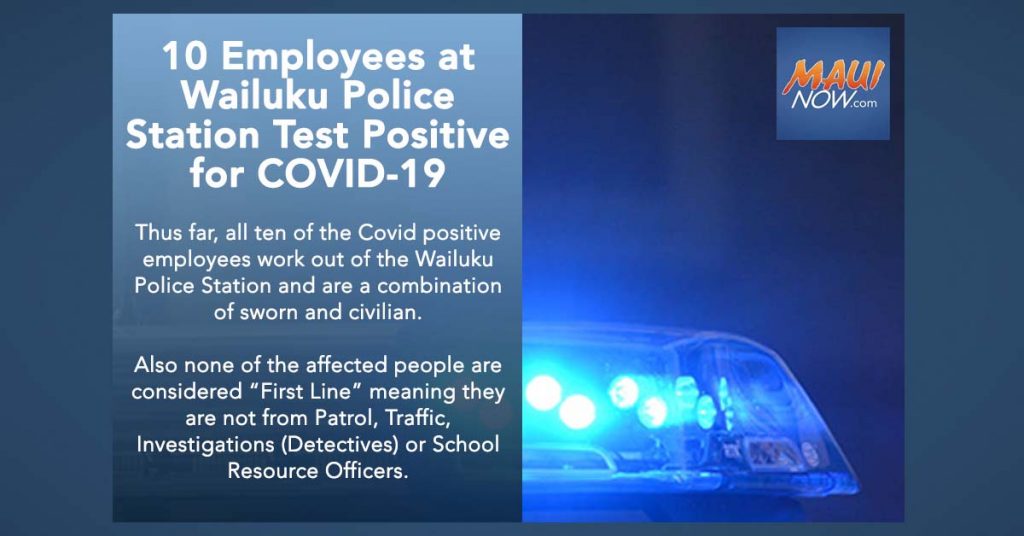 A total of 10 employees at Maui Police Department’s Wailuku Station have tested positive for COVID-19 since the first case was reported at the department on Aug. 27.

On Friday, Aug. 28, a second and third employee tested positive; and today, the department is reporting an additional seven presumptive positive cases.

The latest cases were discovered via rapid testing conducted by the department on Monday, Aug. 31, in coordination with the state Department of Health.

This was the third onsite testing held at the Wailuku Police Station.  Police say 45 tests were conducted as part of the latest round of testing for employees that may have had first person contact with one of the three earlier confirmed positive employees.

Police say thus far, all 10 of the COVID-19 positive individuals work out of the Wailuku Police Station and are a combination of sworn and civilian employees who have limited contact with the general public. Also none of the affected people are considered “first line,” meaning they are not from patrol, traffic, investigations (Detectives) or school resource officers.

The Maui Police Department reports that it continues to take necessary precautions to minimize the spread, and enhance the safety for our personnel and the community. Precautions include commercial sanitizing, additional testing, expanding and encouraging testing for all first responders, and limiting face to face by utilizing electronic means when possible.

“Rest assure the Maui Police Department will continue to respond to cases and protect and serve the Maui Community safely,” department officials said in a press release issued today.