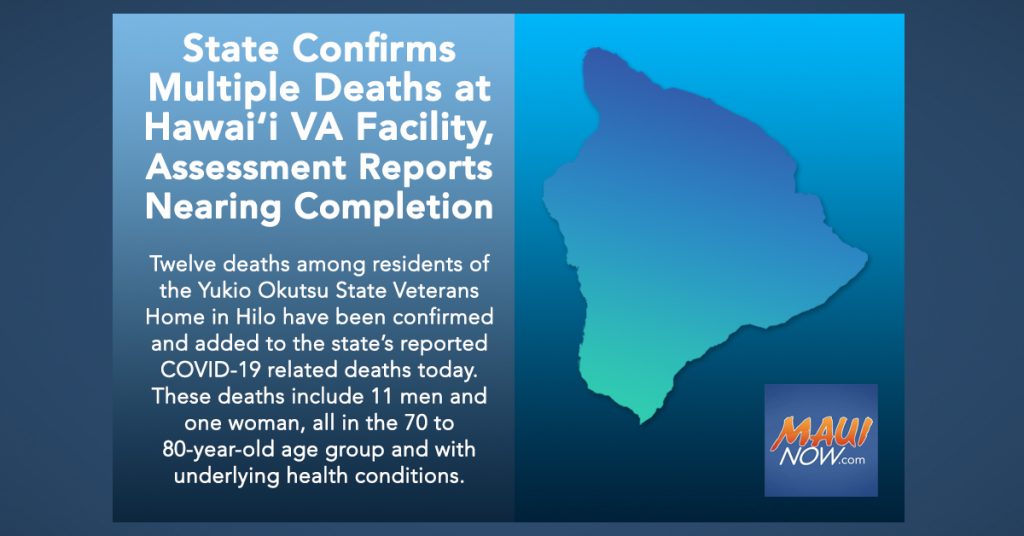 State officials have confirmed 15 of the 18 deaths reported at the Yukio Okutsu State Veterans Home in Hilo on Hawaiʻi Island.  The state Department of health had previously confirmed three deaths, and today, confirmed 12 more deaths among residents of the facility.

These deaths include 11 men and one woman, all in the 70 to 80-year-old age group and with underlying health conditions.  Ten of the residents passed away at the home and two others were hospitalized.

State officials say reporting on these deaths was delayed due to pending medical reports required for verification and classification of deaths as COVID-19.

The Hilo Medical Center reports a total of seventeen 19 deaths, with 18 of the deaths coming from the Yukio Okutsu State Veterans Home.

Three separate assessments into the infections and deaths at the facility were initiated and are completed or near completion, according to an update provided by the state this morning.

One was conducted by a team from the US Veterans Administration, a second by the Hawai‘i Emergency Management Agency, and a third, an unannounced inspection of infection control measures was conducted by the DOH Office of Health Care Assurance.

The findings and recommendations in the two assessments conducted by the VA and the Incident Command Medical Support Team (HI-EMA, ESF-8) have been transmitted to the Yukio Okutsu Veterans Home and are being prepared for release. It is expected these reports will be ready soon according to state officials. The DOH/OHCA unannounced inspection report is being completed today and will be transmitted to the facility before being shared with the public.

An additional death from COVID-19, unrelated to the home, is also being reported today. A 70 to 79-year-old O‘ahu man, with underlying health conditions, who had  been hospitalized at the time of his death. This brings the cumulative total of COVID-19 related deaths to 120 across the state.