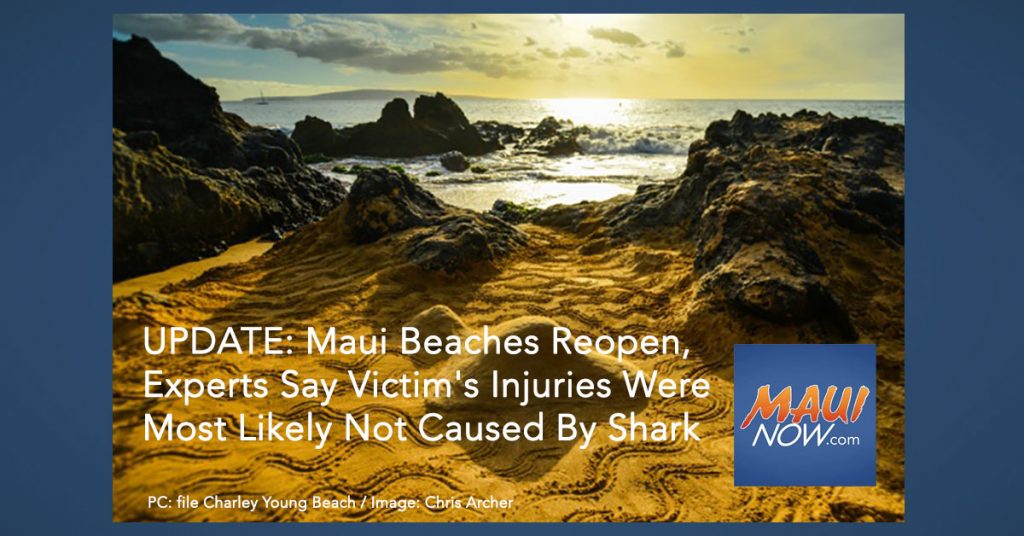 Shark warning signs are being removed from beaches along Maui’s south shore after experts determined that a woman injured while swimming this morning was most likely not bitten by a shark.

Authorities with the Department of Land and Natural Resources assessed the injuries after the 61-year-old Kihei woman was transported to the hospital.  They say it is unknown what did cause her injuries.

The woman suffered multiple puncture wounds and a laceration to her left shoulder in the incident, reported at around 11 a.m., about 120 yards offshore of Charley Young Beach.

At around 2:30 p.m., crews were removing shark warning signs, which had been posted from Kalama Beach Park to the Kīhei boat ramp.

A 61-year-old Kīhei woman suffered multiple puncture wounds and a laceration to her left shoulder in an apparent shark bite incident at Charley Young Beach in South Maui this morning.

The woman told authorities that she did not see a shark but just felt a bite.

She was swimming about 120 yards offshore when the incident occurred at around 11:11 a.m. on Monday, Sept. 21, 2020. Authorities say the ocean conditions at the time were calm and skies were overcast.

When Ocean Safety personnel arrived on scene, the victim was already on shore.  Maui Fire Services Chief Rylan Yatsushiro said the woman managed to make it to shore on her own power.

Ocean Safety and Fire personnel treated the victim for her injuries and she was transported by Medics to the Maui Memorial Medical Center for further care.

A portion of shoreline between the Kīhei Boat Ramp and the north side of Kalama Park was closed and signs are posted warning beachgoers to stay out of the water.  Ocean Safety crews are are also patrolling the water on jet skis.

Ocean safety crews have cleared the north end of Kalama Park of and Kamaʻole I of beachgoers and were checking Kamaʻole II and III.

Officials with the state Department of Land and Natural Resources say warning signs remain in place until noon tomorrow, after state and county officials have had a chance to survey the area.

*This is a developing story. Further details will be added as they become available.