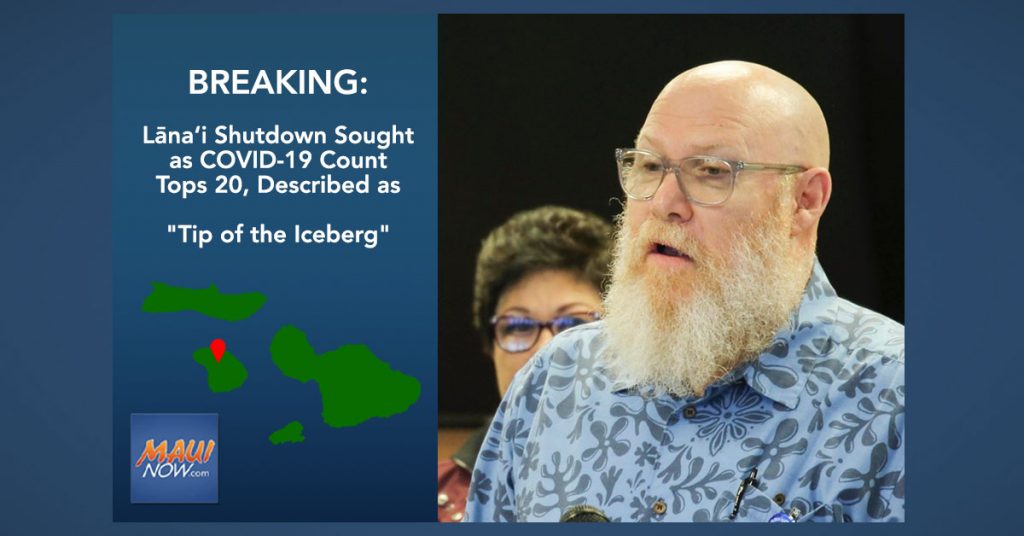 Medical and government leaders are calling for a shutdown of the island of Lāna‘i and mass testing as COVID-19 positive cases on the island had surged to upwards of 20 by Wednesday night.

The recommendation was made as news of the island’s first four cases was reported on Tuesday afternoon, followed by an update on Wednesday afternoon that the case count had surged to 16.  Then, during a follow up community meeting Wednesday evening, healthcare officials updated the total case count to 20-23 positive COVID-19 individuals on Lāna‘i.

Dr. Lee Weiss, Regional Director of Emergency Medical Services with Maui Health warned that swift action needs to be taken. He said the cases identified so far, are “the tip of the iceberg,” and estimated that 10 percent of the Lāna‘i population could be positive within a week.  He called for mass testing as well as a temporary shut down of the island to travel, calling its border “porous.”

“This is a respiratory virus.  At best… one person represents the opportunity to infect 10 to 13. It could be higher than that.  So when we look at the actual number, it’s considerably higher than the 23 that were found,” said Dr. Weiss.  “The question really shouldn’t be what should we do now; the question is how fast do we do it.”

“I believe you do have to shut down. I believe you have a porous border.  I believe that the majority of the cases are from a single spreader event, and they are multi-generational households. And it is a rapidly spreading fire, so to speak.  And you don’t know what you don’t know until you do mass testing,” said Dr. Weiss noting that some of the point-of-care testing is on the way.

“All of the tests that you’d need to use for people who are symptomatic–because a point-of-care test will not work in that environment–have to be sent off island, and that represents a concern because you have the results of a ‘super spreader event’ and it’s going to take two days to get the results from a mass screening event.  You could double the number of positives just waiting for the results,” said Dr. Weiss.

Weiss recommended a several-pronged approach including: (1) close down the border; (2) conduct mass testing with a combination of both point-of-care tests (preferably NAAT tests) and main-frame tests on a molecular, multi-channel analyzer (especially for patients who are symptomatic to do both); (3) relook at inter-county transit with testing instead of test-free; and (4) launch a public health effort to educate people to follow the Ws including wearing a mask.

“It’s only going to take one respiratory failure to show everybody how bad this could get. We do have cases on Lāna‘i, but many of us are of the opinion that you don’t have a double-digit number of cases on Lāna‘i–you have a triple-digit number of cases on Lāna‘i,” Dr. Weiss projected, “And you could have as much as 10 percent of your population positive by next week.  I believe that in my heart. I believe that based upon 37 years of practicing not only emergency medicine, I’m a fellowship trained researcher ID, and I believe in the science. And that’s all this is.  It’s not a political statement.  It has nothing to do with politics.  It has to do with the safety and security of the island and its residents–all of them.”

“So in my world, I hate to say this, you have to shut the island down for two weeks. You have to make the borders less porous. You have to relook at inter county transit with testing instead of test-free, because it’s clear that there’s at least one case related to someone coming from outside of Maui County, coming to Maui County–specifically Lāna‘i–who didn’t get tested.  We don’t know why yet.”

While an official determination on the source of the outbreak remains under investigation, Dr. Weiss said the virus is “rapidly spreading” and he said he believes the outbreak is a “single spreader event,” pointing toward a potential travel related case.   On Tuesday afternoon, the state Department of Health said that initial findings determined that one of the first four cases identified on Tuesday, may be associated with recent travel.

When cases were in the teens earlier in the day on Wednesday, officials with the Maui District Health office said all involved residents; none were hospitalized; and all are isolating at home.  It’s unclear if the additional cases involve residents or visitors.

Senator J Kalani English (Senate District 7 – Hāna, East and Upcountry Maui, Molokaʻi, Lānaʻi and Kahoʻolawe) who co-hosted a community Zoom meeting on Wednesday night said he would be talking to the governor on Thursday and would be presenting him with the recommendations.

He asked the public to consider it a shutdown already.  “Don’t go out unless you absolutely have to.  It will take quick action, but you can take even quicker action now,” said Sen. English.

He joined Representative Lynn DeCoite (D- Moloka‘i, Lāna‘i and East Maui) and the Lāna‘i Emergency Preparedness Medical Sector in discussing the updates and formulating a plan of action.

In terms of travel, Maui Mayor Michael Victorino said that unlike other counties, Maui has multiple islands, including travel by boat and air, which required additional considerations when establishing regulations for travel between islands.

He called on the community to do their part, with the county to focus on testing and disinfecting.  “If you are calm, patient, adaptable and are able to pivot and make changes as necessary, we can get through this all together.  And I can assure you our support is 100 percent behind you, not only with prayers, but with action,” said Mayor Victorino.

Lāna‘i High and Elementary School will be switching to distance learning effective Thursday, Oct. 22 for all grade levels due to the COVID-19 outbreak on the island.

In a letter to parents on Wednesday, Lāna‘i High and Elementary School Principal Elton Kinoshita said, “While there are no confirmed cases involving LHES students or staff, out of an abundance of caution, we will be transitioning to a distance learning model effective tomorrow, Thursday, Oct. 22 for all grade levels pre-kindergarten to grade 12.”

Kinoshita said he will continue to monitor the situation and provide an update by Friday, Oct. 30, about transitioning back to a blended learning model for pre-kindergarten through fifth grade classes.  “Please note, the transition will not be sudden and we will give staff and families a two week notice to help with planning,” Kinoshita wrote.

Grab-and-go meal service for students will continue Monday through Friday from 11:15 a.m. to 12 p.m. (excluding holidays).

Families who are experiencing inconsistent internet connectivity or who have a problem with their DOE issued device, are asked to call the high school at (808) 565-7900 to resolve any issues.