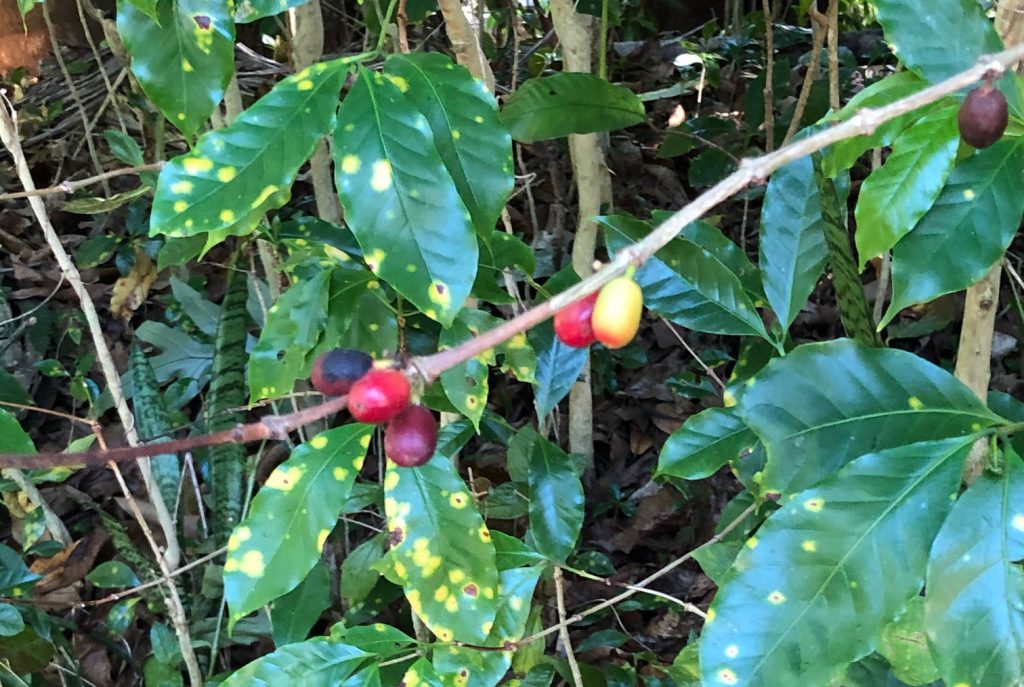 Coffee leaf rust (CLR), a devastating pest, has been confirmed on coffee plants on the Big Island by the U.S. Department of Agriculture National Identification Services.

The samples were collected by a grower on a farm in the Holualoa area, south of Kailua-Kona, on Hawai`i Island on Oct. 31, 2020. Earlier samples from Hilo were negative for CLR.

Earlier in October, CLR was detected and confirmed in the Haiku area of Maui. CLR has not been detected on other islands.

CLR is one of the most devastating pests of coffee plants and is established in all major coffee-growing areas of the world, but had not previously been found in Hawai`i prior to its recent discovery on Maui and the Big Island.

“Coffee is one of Hawai`i’s signature crops, of which production was estimated to be $54.3 million in 2019,” said Phyllis Shimabukuro-Geiser, chairperson of the Hawai`i Board of Agriculture. “As surveys continue across the state, the Hawai`i Department of Agriculture is preparing to establish interim rules that will hopefully prevent the spread of the fungus to uninfested islands.”

The Hawai`i Department of Agriculture’s Advisory Committee on Plant and Animals has scheduled a meeting on Friday, Nov. 13, 2020 at 1:30 p.m. to consider an interim rule to restrict the movement of coffee plants and coffee plant material from islands found to have CLR to islands on which the fungus has not been detected. Information on the meeting via Zoom is available at: http://hdoa.hawaii.gov/blog/main/pqmtgs/.

CLR can cause severe defoliation of coffee plants. Infected leaves drop prematurely, greatly reducing the plant’s photosynthetic capacity. Vegetative and berry growth are reduced depending on the intensity of rust in the current year. Longterm effects of rust may include dieback, which can have a significant impact on the following year’s yield, with some researchers estimating losses between 30 and 80 percent.

The first observable symptoms are yellow-orange rust spots, appearing on the upper surface of leaves. On the underside of the leaves, infectious spores appear resembling a patch of yellow- to dark orange-colored powder. These young lesions steadily increase in size with the center of the lesion turning necrotic and brown, with the infection eventually progressing up the tree. CLR may also infect young stems and  berries.

HDOA’s Plant Pest Control Branch has prepared a field guide to aid in the detection and reporting of possible  CLR infections. The field guide maybe found at: http://hdoa.hawaii.gov/pi/ppc/new-pest-advisories/.

While there are fungicides that may be used to help control the fungus, one of the key factors to any pest management program is good sanitation practices. Regular pruning and training of the coffee tree helps to prevent over-cropping and maintain a healthy field. These practices help to improve air circulation and also to open up the canopy to allow proper fungicide spray coverage. Good weed control is an important factor as it keeps competition for vital nutrients low, thereby reducing the susceptibility to the rust.

CLR, Hemileia vastatrix, was first discovered in Sri Lanka in 1869 and is now found in the major coffee-growing regions of the world, including Southeast Asia, Africa, and Central and South America.

Hawai`i has strict importation rules requiring all imported green coffee beans for roasting and associated packing materials be fumigated prior to entering the state to ensure beans are free of pathogens and insect pests. These rules also subject coffee plants and propagative plant parts to strict quarantine requirements if imported to Hawai`i, including a quarantine on all imported coffee plants for a minimum of one year in a state-run quarantine facility.

For more information on coffee leaf rust go to the UH-CTAHR webpages at: www.hawaiicoffeeed.com/clr.html or www.extento.hawaii.edu/kbase/crop/Type/h_vasta.htm.