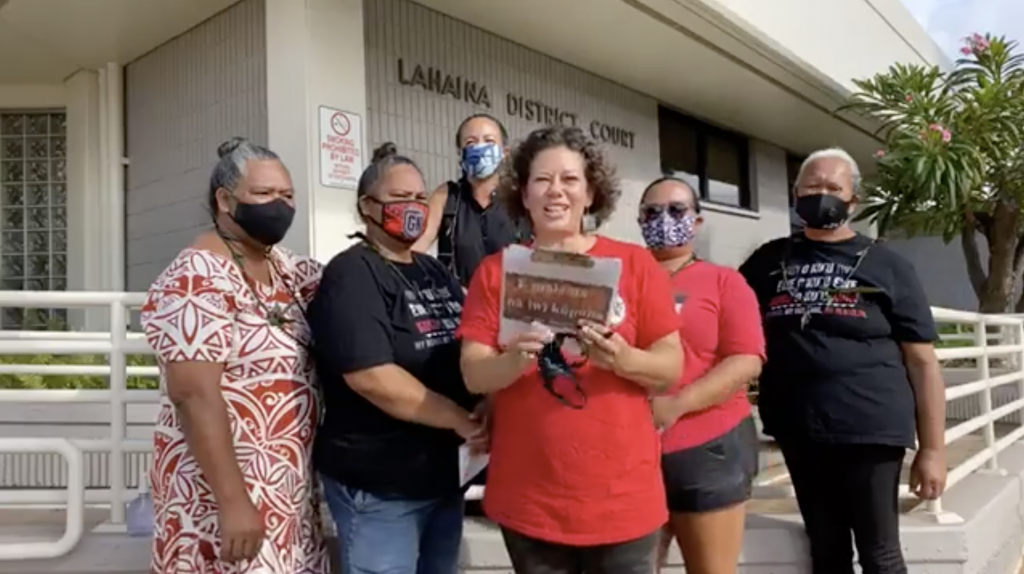 Charges have reportedly been dropped against five Lahaina women who were arrested last month for refusing to leave a construction site in West Maui.

The group continues to voice opposition to trenching and utility installation work amid a dispute involving protection of ancestral burials and claims of kuleana lands.

The women with the Kiaʻi Kauaula group, who go by the name Nā Wāhine Koa, made a public statement at Lahaina District Court on Monday where they say their bail was refunded.

Following their arrest on Oct. 13, construction crews working on the same water line, later encountered human remains at a separate site on Oct. 23.

Representatives with West Maui Construction say that out of respect for the sensitive nature of the area, the company has had archaeological monitors at the worksite.  As of Nov. 18, work on the irrigation waterline had not resumed and the company was still awaiting guidance from the State Historic Preservation Division.

“West Maui Construction looks forward to finishing the irrigation waterline project and will continue to observe all laws,” the company said in a statement to Maui Now.

The company has expressed concern that “without government and/or law enforcement intervention, private property rights throughout the County, could be negatively impacted.”

The Kia’i group issued a press release on Monday saying they are asking for the record of arrests to be expunged as soon as possible. “Kia’i Kauaula demand the County take meaningful, affirmative action to prevent future civil and political rights violations and commit to avoiding the criminalizing of Kānaka Maoli exercising constitutionally protected practices.”

West Maui Construction meantime, says it has been in dialogue with the County in an attempt to find a mutual understanding with those who are opposed to the project.

The waterline in question is being constructed for Laniupoko Irrigation Company, a PUC regulated utility that supplies irrigation water to the Makila/Laniupoko/Lahaina area, to supporting farming needs.