The week of festivities surrounding King Kamehameha’s birth, wraps up on Saturday, June 13, 2009 with Na Kamehameha Commemorative Pa’u Parade and Ho’olaulea on Front Street in Lahaina. 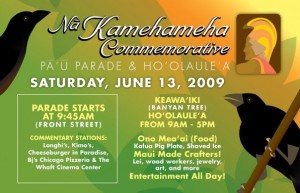 Parade Marshals Adelaide Ka-iwi Ku-amu Sylva and Henrietta He-neli Ma-huna were selected because of their command of the Hawaiian Language.Â  Both are 95-year-old Lahaina natives who grew up in Olowalu.

Opening ceremonies begin at 9 a.m. at Keawa’iki ParK.Â  At 9:45 the parade begins featuring Pa’u riders, floats and marching units.Â  The starting point is at Kenui Street, then the parade heads south along Front Street, ending at the old Lahaina Armory Park across from Moku’ula.

The parade route will also feature commentary along the parade route at select locations along Front Street including Longhi’s, Kimo’s, Cheeseburger in Paradise, BJ’s Chicago Pizzeria and The Wharf Cinema Center.

“Usually a Pa’u queen leads the procession, dressed in red, followed the islands’ princesses, ladies in waiting and paniolos adorned in the colors and flowers particular to each island,” explained Daryl Fujiwara, who serves as one of the event coordinators.

“Red with ohia lehua represents the island of Hawaii; pink with lokelani for Maui, gray or blue with hina hina for Kahoolawe; orange with kaunaoa for Lanai, green with kukui for Molokai, yellow with ilima for Oahu, purple with mokihana for Kauai and white or brown with Pupu o Niihau for the tiny Island of Niihau.”

Front Street will be closed to traffic starting at 9:00 a.m. Admission to the parade and Ho’olaule’a is free. For more information about the Parade and the Ho’olaule’a please call Fujiwara at 808-242-7282.

The festivities continue with a Ho’olaulea featuring entertainment, awards, crafters and food booths beneath the banyan tree through 5 p.m.

Our news crews were on hand to record highlights from last year’s (2008) event in the video below: