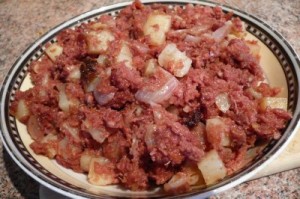 We tend to think of Hawaiian dishes as being from pork or chicken but, thanks to the many cultural influences found in the food of Hawaii, there are also plenty of great beef dishes to try tonight! You will find that many of these dishes have a Japanese flare, and all of them are quite easy to make! So, get going and try one of our very favorite Hawaiian beef dishes tonight!

Combine all ingredients into a large bowl. Transfer mixture into a loaf pan or pie plate and press into the pan. Cover the pan with a paper towel or plastic wrap and microwave on 50 percent power for 10 minutes. Allow to stand for an additional ten minutes and serve.

Preheat the oven to 400 degrees and grease a large baking pan. Combine the beef, eggs and flour and form into small balls. Place balls into greased baking pan and bake for about 15 minutes or until balls are cooked through.  In a separate bowl, combine cornstarch, sugar and soy sauce, and then add broth, sake, ginger and garlic. Heat over a medium flame until the sauce thickens. Add meatballs to mixture and heat through.

Cut sirloin steak into small, bite-size cubes. Add soy sauce, sesame oil, ginger, garlic, onions and peppers to meat and mix well. Marinate mixture for one hour. Drain meat and begin heating oil in a deep skillet. Add marinated meat and cook for two to three minutes or until meat is cooked through. Sprinkle with ground sesame seeds before serving.

After the steaks have been cut into thin strips, add them to the sugar and mix well. Add the soy sauce, water and garlic to steak and sugar mixture. Add green onions and mix well. Add sesame oil and marinate entire mixture for at least one day. Prepare steaks your favorite way: grill, broil, pan fry or bake. Serve with vegetables and rice for a hearty meal.

A Tourists GUide to Hawaii’s Seafood