Pulp Fiction, the play, will have its final performances, this weekend on April 15, 16, and 17, at I’ao Theatre in Wailuku. This adaptation of Quentin Tarantino’s cult classic released in 1994, has audiences applauding its inventiveness. Director William Makozak utilizes the stage space to reshape immense scenes from the movie, incorporating that unforgettable sound of the original cinematic score.

“It’s a great musical soundtrack,” said Steven Dascoulias, sound director for the show. “The adaptation, and the whole Pulp Fiction theme is [pause] intense,” said Dascoulias, as he gestured toward the stage.  The set design includes the necessary props without being cluttered. Inevitably the acting and music draws the audience into a crafty story, adapted by Alley Cats Production members, Justin Banek and Nicholas Batres.

Producers, Banek and Batres also arranged the music with Shaggy Jenkins and David Frank Gallagar. Banek also plays “Pumpkin,” in the show, and Batres is the swarthy “Vincent.”

The talented duo broke down the original movie into sixteen scenes. The diner in the movie, also features prominently, as the first and last scene in the play, closing the story with a kind of macabre symmetry. Expect the pacing to be quick, with pop-culture references and dialogue, along with Tarantino’s signature non-linear storytelling and stylized violence. There are mature themes in this play.

It seems that the Alley Cats appreciate Tarantino’s artistry and creativity. Last year on August 9, 2010, the Alley Cats Production appeared for one night at I’ao Theatre, to perform an adaptation of another Tarantino flick, “Reservoir Dogs.”

Tickets for the show are available for $20, at Sandell Artworks, located at 1980 Main Street, Wailuku. Or at the I’ao Theatre box office. Tickets are $15 on Sunday. This ticket price is also available on Friday or Saturday if you bring a non-perishable food item for the Food Bank. Call 359-1939, for more information. 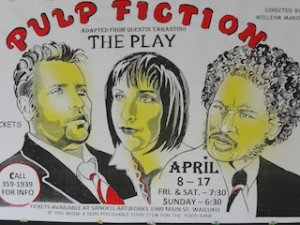 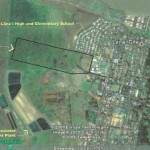 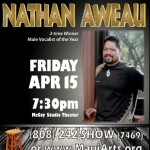 Solo Sessions with Nathan Aweau at the MACC