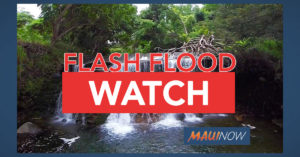 A flash flood watch is now in effect for all Hawaiian islands until Monday afternoon, the National Weather Service announced this afternoon.

Officials say an upper-level low to the west of the islands will combine with strong east to southeast winds to bring the potential for excessive rainfall, especially to windward areas.

The ground is saturated in many areas due to recent rainfall, and any heavy showers that develop will lead to runoff in streams and rivers, increasing the potential for flash flooding.

Officials warn that flooding in low spots which could make some roadways impassable. Debris in streams and gulches may clog bridges and culverts. Strong winds may cause trees and branches to fall, increasing the potential for landslides.

A flash flood watch means that conditions are favorable for flash flooding.

“Flash flooding is life threatening. Do not cross fast flowing water in your vehicle or on foot,” an announcement from the NWS read.

“Be prepared to take action if a flash flood warning is issued. If you experience heavy rain or rising water, head to higher ground immediately.”

Cheeseburger in Paradise and Waikiki Brewing Company
All FOTH and BOTH Positions!
West Maui · 2 weeks ago
BMW of Maui
Car Wash / Detail
Central Maui · 3 weeks ago
Looking for locally based talent?Post a Job Listing