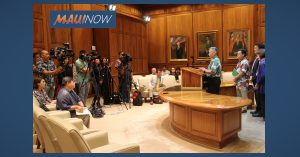 Following his return from a trip to Japan on Tuesday, Gov. Ige held a press conference earlier today to provide updates on the novel coronavirus outbreak and the status of the Thirty Meter Telescope.

During the briefing, Ige pointed to the need for Hawaiʻi to secure quick and accurate testing for the virus, which was one of his pleas to the Center for Disease Control and Prevention during a trip to Washington, D.C. from Feb. 5 to 11 for the National Governors Association’s Winter Meeting.

“Hawaiʻi has a very unique situation. The time it takes for us to get a sample send it to Atlanta for testing and get it back exceeds more than a week,” Ige said.

“The ability to test in Hawaiʻi should be a national priority just because of our isolation.”

Ige predicted that Hawaiʻi will be one of the first states to provide in-state testing.

To date, Hawaiʻi has no confirmed cases of the virus.

While in Japan, Ige said he met with Japanese government officials to discuss the outbreak and its impacts on both Hawaiʻi and the Japanese people.

“We have stood up a very extensive process of monitoring, identification, and have been pretty aggressive in ensuring that if the virus should appear here that we are prepared,” Ige said he told Japanese officials of prevention efforts in Hawaiʻi.

The Japanese visitor who demonstrated symptoms of the virus after visiting Maui and Oʻahu from Jan. 28 to Feb. 7, is hospitalized, but his wife has “fully recovered,” Ige said.

Ige also met with the Ministry of Science and Education Technology, an agency that funds the TMT, to “assure them of the efforts that we are making to resolve the differences on the project.”

One of those efforts, Ige explained, is a reconciliation commission that will be launched to “look at the broader issues of reconciliation with the Native Hawaiian people, the state of Hawaiʻi, and the United States of America.”

Activists opposed to the controversial TMT project agreed to remove their protest blockade from Maunakea Access Road as long as no construction begins. That temporary truce is slated to end this month.