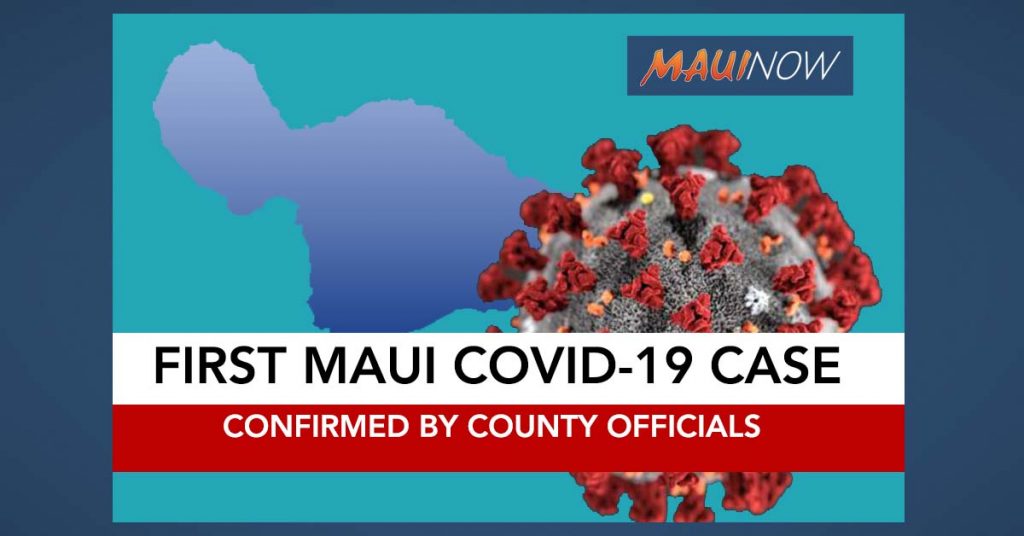 County of Maui officials were informed earlier this evening that the test result for one Person Under Investigation here on Maui was returned positive for Coronavirus or COVID-19. The female visitor is currently in isolation and continues to be monitored by the state Department of Health.

This brings to six the total number of people in Hawaiʻi that have tested presumptively positive for COVID-19.

Gov. David Ige is expected to host a press conference on this issue tomorrow, Sunday, March 15 at 1:30 p.m. (Note: time has been revised by state officials)

Earlier this evening the Honolulu Star-Advertiser reported that one person on Oʻahu had tested positive there as well, marking Hawaiʻi’s fifth case.

Earlier today, state officials confirmed that two visitors to the island of Kauaʻi (who had also visited Maui during their stay) tested positive for the coronavirus or COVID-19, becoming the third and fourth presumptive positive tests in Hawaiʻi.  Authorities have since said the couple is originally from Indiana.  At this time, at least three healthcare workers (one on Kauaʻi and two on Maui) have been excluded from work because of possible exposure from the couple.

On March 8, DOH tested a second presumptive positive test result for an elderly adult who is hospitalized in serious condition on O‘ahu. The individual felt ill on March 2 in Washington State and traveled home to Honolulu on March 4.

The first presumptive positive case was announced March 6. That individual was a passenger on the Grand Princess cruise in Mexico from Feb. 11-21. After arriving in Mexico, the individual traveled home to Honolulu with no symptoms. While home in Honolulu, the individual became ill on March 1, sought medical care and was tested on March 6.

Updates will be shared as information becomes available .