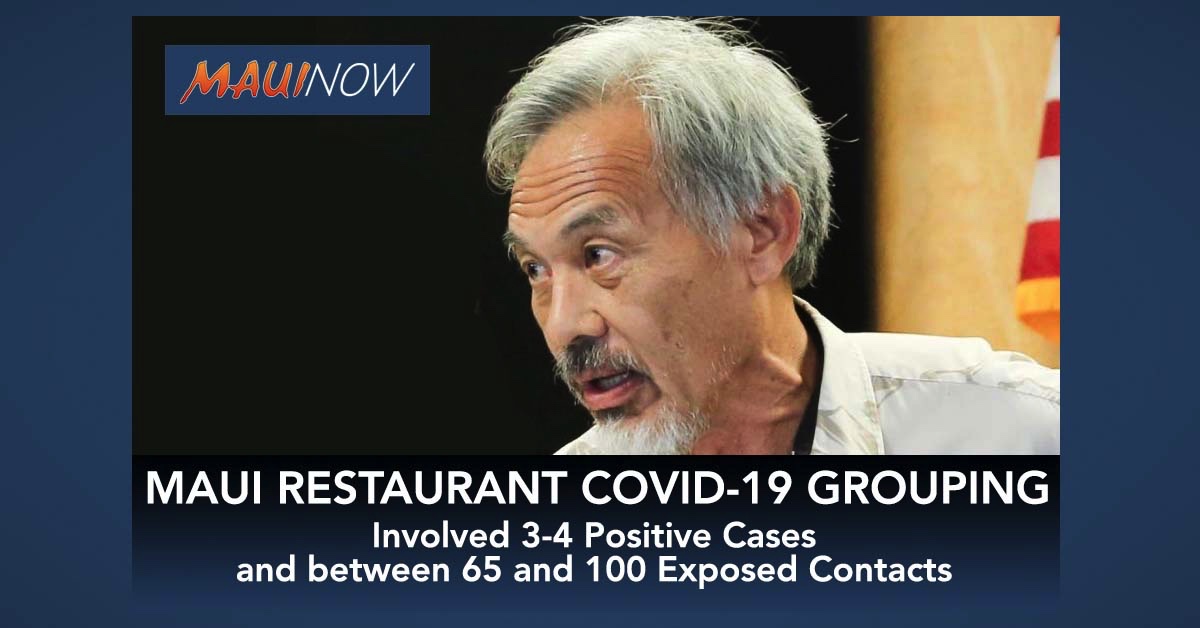 Officials with the Maui District Health Office clarified information shared yesterday about a group of positive COVID-19 cases involving a restaurant on Maui.  Dr. Lorrin Pang said he misspoke by calling the group a cluster and said the group included 3 or 4 confirmed cases and 100 exposed contacts.

A joint statement was released this evening from Mayor Michael Victorino and Merriman’s Kapalua restaurant confirming the location of the grouping.

“I want to mahalo Merriman’s Restaurants for coming forward on their own accord regarding three employees of their Kapalua restaurant that tested positive for COVID-19 in March. We are grateful they did not allow any employees to come to work while sick or symptomatic and that they closed their restaurant well before test results were returned. When businesses follow best practices during this pandemic, they protect our entire Maui County community.”

Cristina Schenk, chief executive officer of Merriman’s Restaurants, provided a statement saying, “We took a proactive approach in instructing all employees not to come to work sick during the COVID-19 pandemic. Following this instruction, three employees called out sick on March 12, 13 and 16. We made the decision to close our restaurant to full service dining on March 17 and closed take out service a few days later. Throughout this period of time we aggressively sanitized all high-touch points, including menus, tables and door knobs.

The employees sought testing and received positive COVID-19 test results on March 27. By that time, however, they had recovered and did not need hospitalization.

We are so grateful to our employees for going into self-quarantine immediately once they were sick. Thanks to their proactive behavior, this did not spread further or put the public at risk.”

“It was a food establishment and there were three or four confirmed cases that it took us a while to link back all because it went backwards.  We had people coming in and we would trace it backwards. And that was associated with a hundred contacts,” said Dr. Pang.

He said this type of response happened twice on Maui, but would not disclose the name of the restaurant or other business.

A day earlier, Dr. Pang said the grouping included 65 individuals and was at a “big restaurant.” He noted that it occurred on Maui earlier in the pandemic.  “It was on Maui and they did convert from sit-down eating to take-out drive through, and still,” he said there were “confirmed cases.”

At that point, he said, “We just told all the people exposed to remove yourself from society for 14 days, and if you get sick we will think about testing you if you have more contacts because you didn’t stay away,” he said.

Sara Hauptman, a public health educator with the Maui District Health office described a contact as a person who may have spent time near a positive case or may have been exposed in another way.

“Those people have been thoroughly investigated by the Hawaiʻi Department of Health and our epidemiology office, so at this point in time in considering that those particular three positives from the one restaurant establishment–it’s over a month old at this point and we do not want the public to be concerned at all as it has been thoroughly investigated and determined to not be a cluster,” said Hauptman who spoke at Mayor Victorino’s press conference on Wednesday.

When asked why the name of the restaurant was not released, Hauptman said, “Once again, I’d like to mention, it’s just three positives from that particular restaurant.  When you look over at Kona, they had a cluster of cases at a McDonald’s and that was 30 positive COVID-19 patients.  So when you look at 30 versus three, there’s a big significant difference there.  And we have determined through investigation work that these three individuals and all the investigations that have gone on with them–it doesn’t pose a high risk at all to public health.  It’s a very low, nearly non-existent risk to public health. So we determined that we would not release the name of that establishment.”

There were other instances on Maui in which a small grouping of COVID-19 positive cases was disclosed to the public.  Hale Makua Health Services provided information on a nursing home resident and two home care patients along with progress updates on testing for both contacts and affected patients.  At Ka Hale A Ke Ola Homeless Resource Center, information was disclosed on a positive client, as well as testing on a second individual.

There was another instance when questions surrounding a cluster or grouping was unclear.  A church cluster was mentioned by State Health Director Dr. Bruce Anderson during a press conference on April 10. During follow-up questioning on April 14, Dr. Anderson clarified that the cluster was on Maui, but said he didn’t have details on that investigation and had not seen a report. Mention of a church cluster also surfaced in a letter from the Mayor to a local congregation ahead of the Easter holiday.

When asked to describe the definition of a cluster, Hauptman described it as “several cases from one source point.” She continued saying, “we have determined that three is not sufficient enough of a number to classify as a cluster.  Whereas when you look at the hospital they have in the tens of people in nurses and patients that have been infected, so we would consider that a cluster.”

Dr. Pang said that some groups like those in elder care or cancer patients face unique challenges because, “Some people, by just nature of the game, cannot isolate and so the clusters build…  And so some of these clusters need a little bit added effort to extend the search to find new sub-clusters to put the fires out.”

“There are some places that are interesting in between.  If you ever saw a cluster in the homeless shelter; thank goodness, we can remove them–and we have.  We have put them in special places–hotels and they do fine,” said Dr. Pang.

Dr. Pang said Maui would be getting two rapid testing kits soon that will each allow for 20 tests per week.  The testing takes about 20 minutes per case, so three can be done in one hour.

According to Dr. Pang, the rapid tests will be used in settings where patients cannot be sent to other locations for isolation like elderly care facilities and the hospital.

“Singapore said that their clusters–one cluster will set them back a week.  I think one bad cluster will set you back two weeks for data. And that’s how we plan to continue on,” said Dr. Pang.