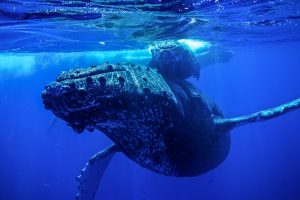 In following state and federal guidelines, the Pacific Whale Foundation has ceased field work. The companyʻs last day of boat-based surveys was March 13.

As part of a collaborative project initiated in 2019, the PWF was hosting visiting researchers from the University of Hawaiʻi and had planned to do humpback whale surveys for 10 days to collect biopsy samples, photo-ID, and morphometrics using drones.

Unfortunately, after 3 days in the field, those came to an abrupt halt.

“It was no longer safe for our team of 7 to work together on our small (26 foot) research vessel, and we had to put the well-being of our team first,” a press release from PWF read.

“We trailered our research vessel, Ocean Protector, and it is safely stored away until we can resume our field work. We will not be able to resume this project until next year, because by now the whales have started their northern migration to the feeding grounds.”

PWF researchers are also not able to complete their boat-based data collection, but are recording shore-based observations, with the help of two volunteer citizen scientists who are doing daily counts and recording the number of vessels on the water.

According to PWF, their volunteers have been reporting that many vessels are still operating and watching whales.

“While commercial tour operators are not running, shipping traffic has been unaffected and recreational vessels, fishermen, and miscellaneous other services are still operating,” the press release added.

“Disappointingly, we have also observed vessels violating the Marine Mammal Protection Act by approaching humpback whales well within the 100-yard approach distance. There is unlikely to be any immediate effect on whale numbers or reproduction because of the timing when the shutdown happened and because most shipping traffic is unaffected; many of the female whales in the breeding grounds will have already mated this season so it is not likely that we will see a humpback whale “baby boom” next year.”

Due to the stay-at-home order, PWF representatives say it is likely that other marine life, such as spinner dolphins, will get a “welcome break from human activities.”

“We know that spinner dolphins throughout Hawaii are subject to immense tourism pressure and, due to swimmers and vessel traffic, are being disrupted during resting daytime hours,” the press release read.

PWF researchers recently published a paper describing what areas are important to spinner dolphins in Maui and if they use these areas the same or differently.

“Having this information will be crucial to the resource managers who are seeking to add increased protections to spinner dolphins, but need scientific data to guide their decision-making,” according to the press release.

PWF research associates in Hawaiʻi, Australia, Ecuador, and Chile are working on analyzing existing data, securing permits for future work, and using the COVID-19 crisis to share their findings through scientific publications and digital outreach programs. 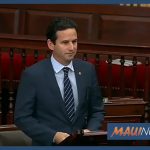 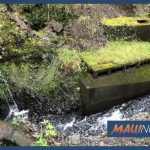