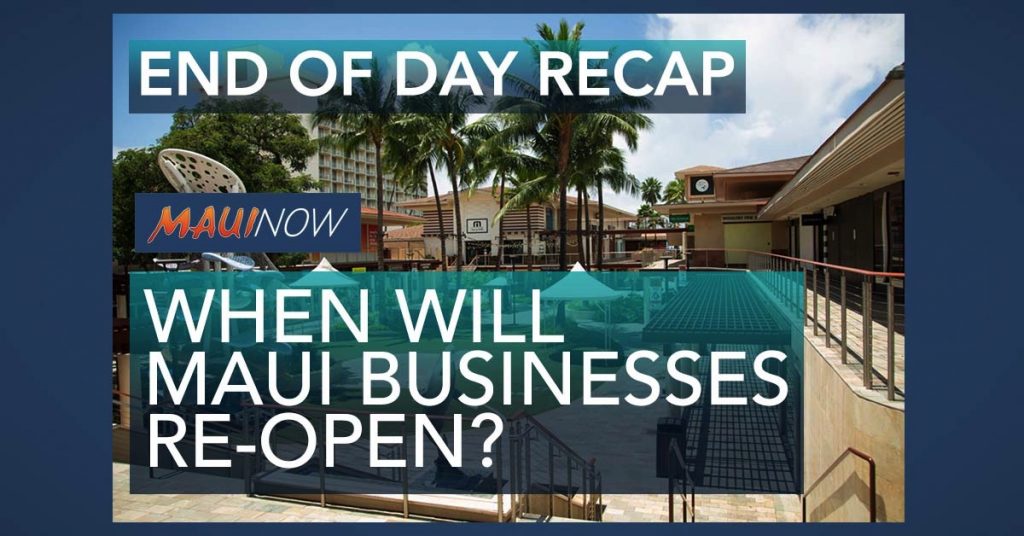 An announcement on the phased reopening of businesses for Maui County is expected tomorrow, according to an afternoon update provided by Maui Mayor Michael Victorino.

When asked if there is a priority system of which businesses will be opened first, Mayor Victorino said, “I will not reveal that at this time. I think we need to make sure that when we announce it… we will have a chart to show you how we came to these conclusions through a John Hopkins report and study; along with a number of other people that have been helping us including the Department of Health.”

Mayor Victorino said, “I want to reveal it tomorrow simultaneously in what we are doing and why we are doing it so that you all understand what the purpose behind opening business will be here in Maui County.”

When asked specifically about golf courses, Mayor Victorino said, “Part of my opening up of exercise areas–one of them would be looking at our golf courses throughout the County of Maui, along with our parks as I mentioned yesterday.  I’m prepared to put exercise and good health as part of the mantra of the reopening of facilities throughout this county.  Hopefully tomorrow we’ll be able to announce some specifics.”

The County of Maui is partnering with Project Hoʻomana to distribute food bags to those in need in the  East Maui community of Hāna.  The distribution will take place tomorrow, Wednesday, April 29, at the Hāna Ball Park starting at 3 p.m.  About 300 bags of food will be distributed (one bag per vehicle).

One-way traffic coming down from Hauʻoli Road through Uakea Road.  The set up will be similar to the drive-through testing that occurred earlier in Hāna.

The event is hosted by the County of Maui in partnership with VIP Food Service, Maui Soda and Ice Works, the Maui County Farm Bureau and Project Hoʻomana.

Maui Has Two New Cases Reported Today,
One of them is a Lānaʻi Woman Who contracted the Virus at the Maui Memorial Medical Center

The state Department of Health says one of the cases reported today involves a Lānaʻi resident who was exposed on the Island of Maui, and who will be remaining on Maui Island for the interim. DOH officials say the Lānaʻi resident has been hospitalzed on Maui for an extended time. The patient was transported in early March to Maui for treatment not associated with coronavirus. The patient initially tested negative for COVID-19, but a recent test came back positive.

Mayor Victorino described the Lānaʻi woman as an elderly individual, over the age of 65, who is from Lānaʻi, but contracted COVID-19 while she was hospitalized at the Maui Memorial Medical Center.

Mayor Victorino said he believes the case is linked to the Maui Hospital cluster, which as of today, stands at 58 individuals, including 38 staff and 20 patients.

“She’s doing fine, as far as I was told today; however, it is, as you can see on the board, Lānaʻi still shows zero.  There is no confirmed cases on the island of Lānaʻi.”

“She has been here for quite a while and her health has improved, but now that COVID-19 has entered her system, we want to make sure that she is… healthy so that she returns back to Lānaʻi and (does) not to spread the COVID-19 there,” said Mayor Victorino.

Support services are ongoing for families and victims of domestic violence and sexual assault during the COVID-19 emergency period, the Department of the Prosecuting Attorney announced.

“If someone needs services for domestic violence and sexual assault, we want them to seek help,” Mayor Michael Victorino said in a press release. “It is a matter of concern that from March 20 to April 22 there have been no child forensic interviews at the Children’s Justice Center. There’s no apparent reason for this decline other than it suggests people are unaware that services are available, even during this COVID-19 emergency.”

County officials report that all of the counties in the state of Hawaiʻi have seen a drop in reported child sexual assault and adult sexual assault cases during the COVID-19 crisis.

A 24-hour Domestic Violence hotline is available by calling (808) 579-9581.  The Women Helping Women administrative officers is available at (808) 242-6600 or via email at [email protected]  Further information is available at WomenHelpingWomenMaui.com.

The County of Maui is partnering with Maui Waena Intermediate School, Maui High School and health care officials to provide videos for keiki and families to help them through COVID-19.  The videos will be hosted on the County of Maui Youtube Channel and Facebook Page.

Two videos have already been released on proper hand washing and a useful exercise routine.  Be on the lookout for more videos every week with educational tips and ideas.