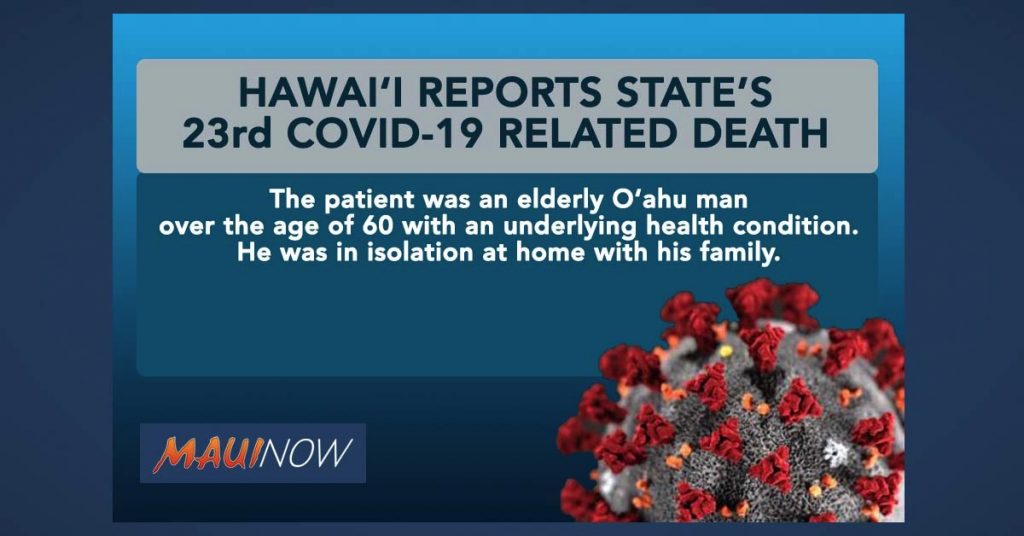 Hawaiʻi reported a 23rd COVID-19 related death today on the island of Oʻahu.  Lieutenant Governor Josh Green reports the latest death involves an elderly Oʻahu resident who had been isolating at home with family.  The state Department of Health confirms that the individual was a man over the age of 60 who had an underlying health condition.

State Health Director Dr. Bruce Anderson said, “We all extend our heartfelt sympathies to the patient’s family and friends who have just lost a loved one. Every COVID-19 death is an emotional reminder to be vigilant, wear a face covering, and practice proper social distancing measures. It’s about protecting each other.”

Today there were a total of 23 new cases in the state for a total of 1,334 reported over the course of the pandemic. The new cases include 20 on Oʻahu, 2 on Hawaiʻi Island and one in a resident who was diagnosed while out of state.

“We are saddened to report another death from COVID-19.  Wash your hands. Keep a physical distance of six feet between non-household members.  Wear masks over both mouth and nose. Exercise extreme caution if you must socialize or attend gatherings.”

We are saddened to report another death from COVID-19.
Wash your hands.
Keep a physical distance of six feet between non-household members.
Wear masks over both mouth and nose.
Exercise extreme caution if you must socialize or attend gatherings.
Mahalo.

Today’s death is the 16th for the island of O‘ahu.  On Maui, six COVID-19 related deaths have been recorded since the start of the pandemic; and one case involved an Kaua‘i resident who was hospitalized out-of-state in Arizona.

Today’s death comes after three deaths reported on Monday, which had occurred over the course of a week July 7-12 and included the following:

Prior to that, other fatalities in the state related to COVID-19 included the following: