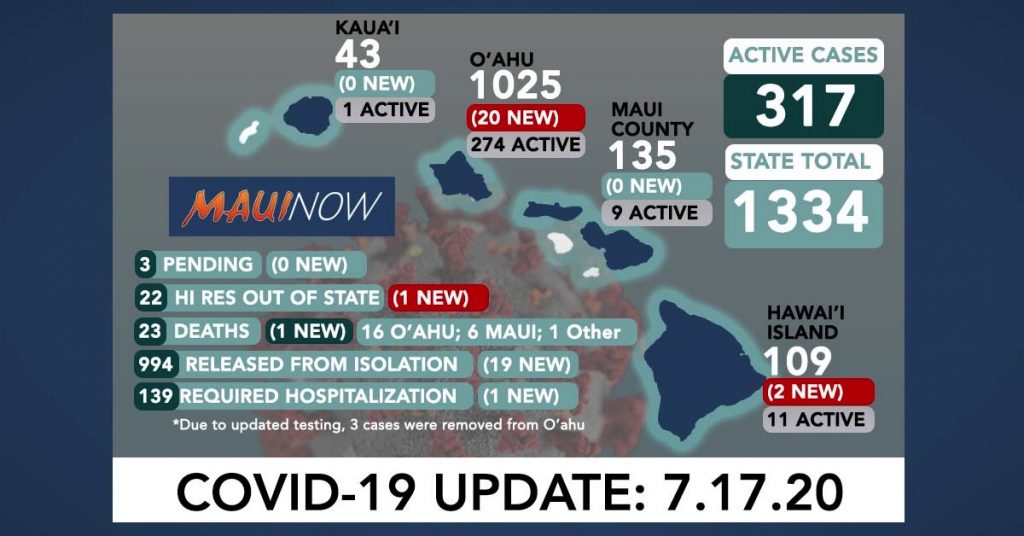 Today there were a total of 23 new COVID-19 cases in Hawaiʻi for a total of 1,334 reported over the course of the pandemic. The new cases include 20 on Oʻahu, two on Hawaiʻi Island and one in a resident who was diagnosed while out of state.  The state Department of Health reports that due to updated testing, three cases were removed from the Oʻahu counts.

Hawaiʻi also reported its 23rd COVID-19 related death today on the island of Oʻahu.  The latest death involves an elderly Oʻahu resident over the age of 60 with an underlying health condition, who had been isolating at home with family, according to the state Department of Health.

Today’s death comes after three deaths reported on Monday, which had occurred over the course of a week July 7-12. Prior COVID-19 related deaths are posted here.

The Hawaiʻi State Department of Health reports that there were 994 individuals released from isolation; and 139 cases (10%) that have required hospitalization.  At least 1,232 patients (92%) were residents.

To date, there have been 23 COVID-19 related deaths in Hawaiʻi, including 16 on Oʻahu, six in Maui County, and one Kauaʻi resident who was hospitalized in Arizona. Hawaiʻi has the lowest mortality rate in the US at 1.3 deaths per 100,000.

In Maui County, cases with onset in the last 28 days have been in the Lahaina, Makawao, Kīhei, Wailuku and Kula zip codes.  Of the 135 cases documented in Maui County over the course of the pandemic, Wailuku, Kahului and Lahaina had the most cases (more than 20 cases each); followed by Kīhei (11-20 cases); Makawao and Spreckelsville (6-10 cases); and Kula, Hāna, Haʻikū and Molokaʻi (1-5 cases each).