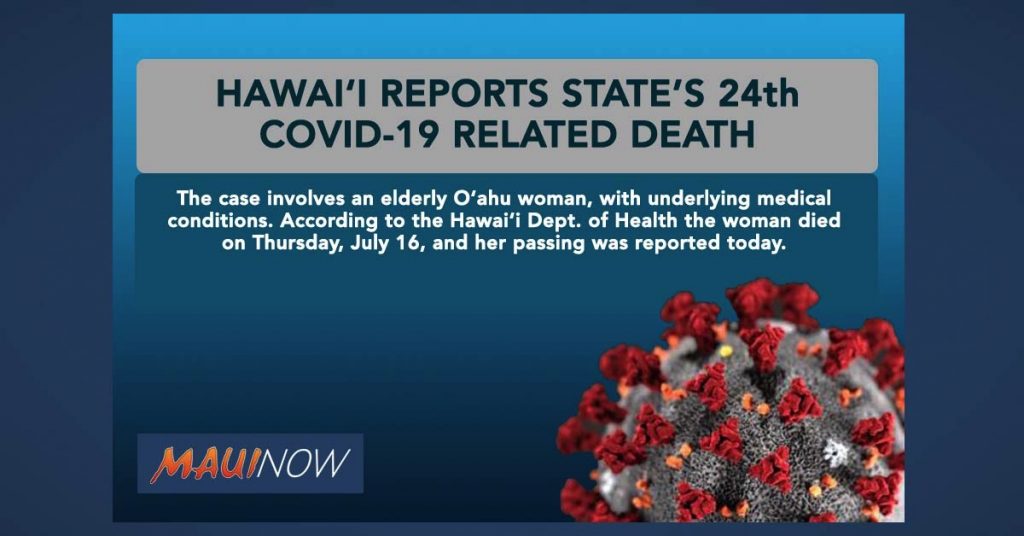 An elderly O‘ahu woman, with underlying medical conditions, is the 24th death due to coronavirus for Hawai‘i. According to the Hawai‘i Dept. of Health the woman died on Thursday, July 16, and her passing was reported today.

The news comes on the heels of another death reported earlier today (July 17), of an elderly O‘ahu man over the age of 60 who had an underlying health condition.  He had been isolating at home with family.

Health Director Dr. Bruce Anderson once again extended sympathies to the woman’s family and friends. “It strikes at all of our hearts, each and every time we have to report another casualty of COVID-19. Please be safe and practice all precautions. People who have been sick with this disease and tragically the victims of coronavirus and their loved ones, deserve that respect and care from each and everyone one of us in Hawai‘i,” Anderson said.

Today there were a total of 23 new cases in the state for a total of 1,334 reported over the course of the pandemic. The new cases include 20 on Oʻahu, 2 on Hawaiʻi Island and one in a resident who was diagnosed while out of state. So far 994 people have been released from isolation and 317 COVID-19 cases remain active in the state.

Today’s deaths are the 16th and 17th for the island of O‘ahu.  On Maui, six COVID-19 related deaths have been recorded since the start of the pandemic; and one case involved an Kaua‘i resident who was hospitalized out-of-state in Arizona.

Today’s death comes after three deaths reported on Monday, which had occurred over the course of a week July 7-12 and included the following:

Prior to that, other fatalities in the state related to COVID-19 included the following: