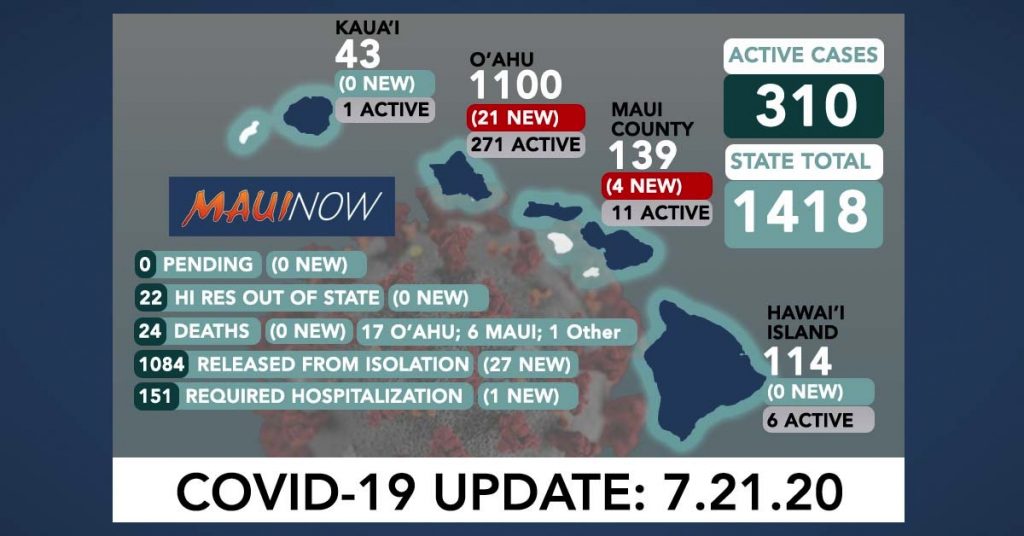 Today there were a total of 25 new COVID-19 cases in Hawaiʻi for a total of 1,418 reported over the course of the pandemic. The new cases include 21 on Oʻahu and four on Maui.  This brings the number of active cases on Maui to 11. There are currently 310 active cases in the state, including 11 on Maui.

Health officials say 21 of the new cases are adults and four are pediatric. Two of the cases on Maui are associated with a history of out-of-state travel.

DOH is also investigating small clusters of cases in Hawaiʻi associated with out-of-state workers, who were exempt from mandatory quarantine as critical infrastructure workers. Department officials say there has been no spread beyond this cluster, as all involved workers were not interacting with the broader community as part of the exemption and are now in quarantine.

Governor David Ige said the case load is what the state expected to see as business reopen and return to activity.  The governor continued to refer to the pandemic as a “marathon,” and asked the public for a commitment to wearing masks, washing hands, keeping six feet apart, avoiding gatherings of any size, and staying at home when sick.

Hawaiʻi also reported its 23rd and 24th COVID-19 related death on Friday, both on the island of Oʻahu in elderly residents with underlying health conditions, according to the state Department of Health. Prior COVID-19 related deaths are posted here.  A week prior, on Saturday, July 11, Hawaiʻi had its greatest single day number of reported cases (42) since DOH began tracking cases in late February.

The Hawaiʻi State Department of Health reports that there were 151 cases (11%) that have required hospitalization.  At least 1,310 patients (92%) were residents.

To date, there have been 24 COVID-19 related deaths in Hawaiʻi, including 17 on Oʻahu, six in Maui County, and one Kauaʻi resident who was hospitalized in Arizona. Hawaiʻi has a mortality rate of 1.7 deaths per 100,000, according to Lt. Gov. Green.

In Maui County, cases with onset in the last 28 days have been in the Lahaina, Makawao, Kīhei and Kula zip codes.  Of the 139 cases documented in Maui County over the course of the pandemic, Wailuku, Kahului and Lahaina had the most cases (more than 20 cases each); followed by Kīhei (11-20 cases); Makawao and Spreckelsville (6-10 cases); and Kula, Hāna, Haʻikū and Molokaʻi (1-5 cases each).