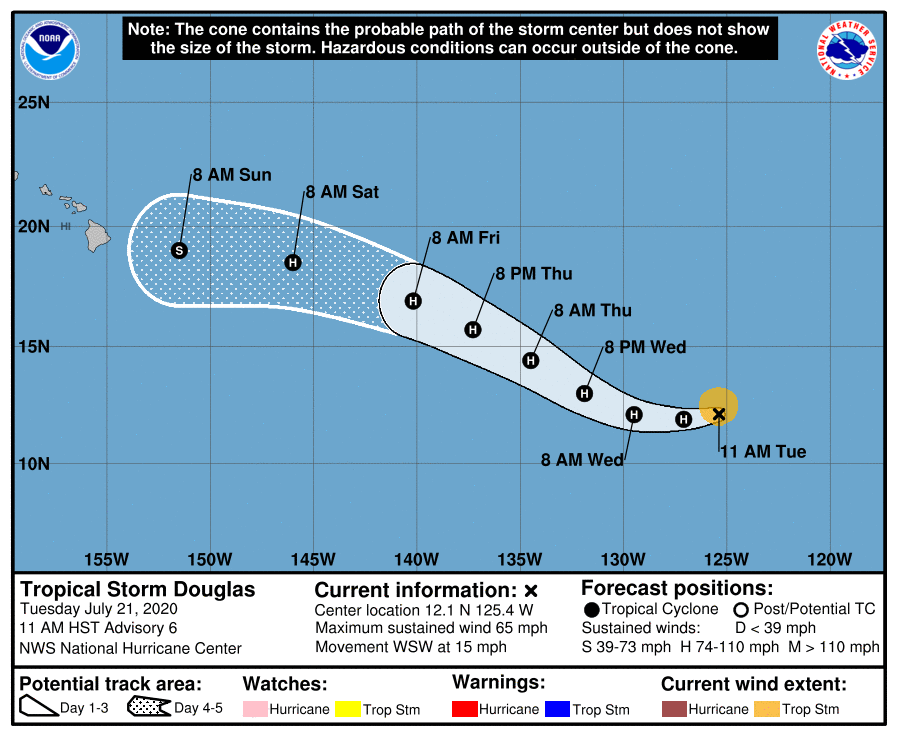 Forecasters with the National Hurricane Center say Tropical Storm Douglas, located about 1260 miles SW of the southern tip of Baja California and 2035 miles East of Hilo, continues to strengthen and could become a hurricane later today or tonight.

The system is still in the Eastern Pacific and is expected to move into the Central Pacific area of jurisdiction towards the end of this week.  While the system is expected to peak in about 48 hours, gradual weakening is shown in the latter stages of the forecast.

The current five day cone forecast suggests that the system could be near the islands on Sunday as a tropical storm; however it’s still too early to say if the system will have an impacts on the Hawaiian Islands.

At 11 a.m. HST, maximum sustained winds for Douglas remain near 65 mph with higher gusts. The system was last tracked moving toward the west-southwest near 15 mph.

The hurricane season in Hawaiʻi runs from June 1 through November 30. The National Oceanic and Atmospheric Administration’s Central Pacific Hurricane Center is predicting a near normal 2020 hurricane season. For the season as a whole, 2 to 6 tropical cyclones are predicted for the Central Pacific basin. This number includes tropical depressions, named storms and hurricanes.