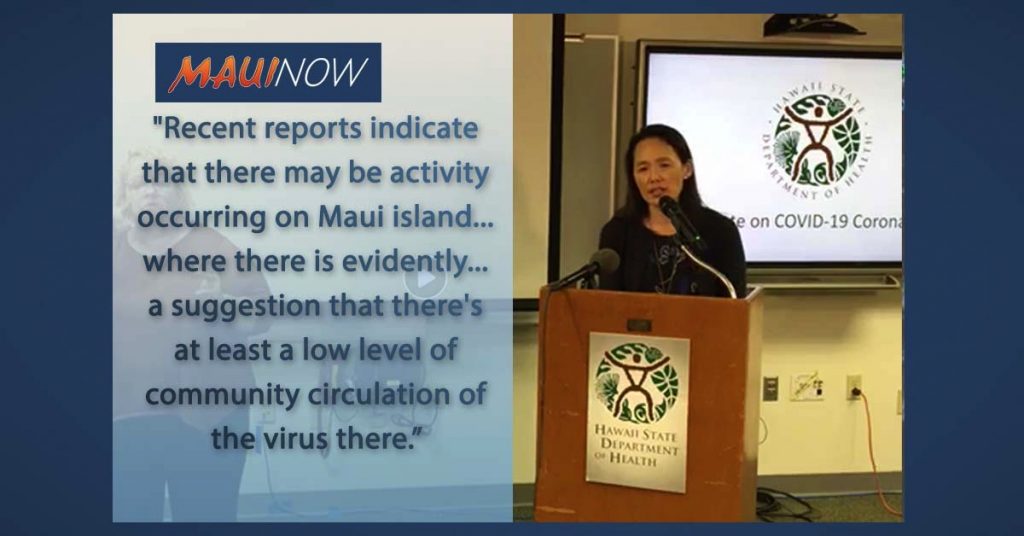 Health Director Bruce Anderson and State Epidemiologist Dr. Sarah Park discussed and answered questions about the recent cases and the state’s contact tracing, case investigation and response procedures.  (scroll to the bottom to view the briefing in its entirety).

While there was a lower level of disease activity in March when schools initially closed, health officials were asked why schools are reopening now when the state has double digit increases daily on Oʻahu.

State Epidemiologist Dr. Sarah Park responded to the question at a media briefing on Thursday afternoon saying, “I’d point you to the fact that at the time–we still didn’t know enough about this disease–but at that time, we knew even less.”

She continued saying, “We also didn’t have the same amount of laboratory testing capacity; and our hospitals and our healthcare centers were ill-prepared at that time because we were still at the beginnings of the pandemic.”

Since then, hospitals and health care providers have been preparing and health officials say hospital systems are now better equipped.

“We have laboratory testing capacity in all the clinical commercial labs albeit it is unstable; so there’s a lot of different things that we need to consider and I would stress over and over again: Our community needs to be a part of the solution.  That means we’re watching to see how well our community actually does adhere to the safe practices–that is also a factor in reopening the schools,” said Dr. Park.

“If we continue to see the community does not adhere to safe practices that is a serious consideration around many things–not just reopening schools, but other things that we as a community need to think about,” she said.

The state Department of Health produces a weekly report that health officials say lags about a week behind the current week of the report.  State Epidemiologist Dr. Sarah Park said it’s just one set of information that they look at when evaluating data.  The results she said, have been “concerning,” but “not surprising.”

“Recent reports indicate that there may be activity occurring on Maui island… where there is evidently… a suggestion that there’s at least a low level of community circulation of the virus there.  There is a concern, but we look at that in conjunction or in combination with all the other things that we do for disease surveillance.  It’s not to be taken just by itself,” said Dr. Park.

The data comes from the state’s sentinel survey program, in which volunteer providers on all islands submit data to the state Department of Health of who they’ve seen in that past week for any illness or issues.  “The numerator is all persons they’ve seen for what we call medically attended respiratory illness.  They conduct testing and submit specimens,” said Dr. Park.

The state also reviews test results and randomly picks those that have indicated no travel and look at their results.  “In the last couple of weeks we’ve seen some positives come through from Maui Island and that’s how we know there’s at least some low level of activity occurring,” said Dr. Park.

Dr. Park notes that there have been cases on Maui as well as Hawaiʻi Island where they’ve traveled to Oʻahu.  She said, “we’re finding that travel to Oʻahu is becoming a risk for our neighbor islands.  It is something to consider.”

She continued saying, “just because we’re seeing predominantly travel associated cases on the neighbor islands does not mean there might be some virus–and in fact we have indications that there is a low level of virus circulation occurring on Maui.  We also have a suggestion that there may also be some on Hawaiʻi Island.  We’re monitoring this very closely.”

“Our communities have a chance to stamp this out and helping by maintaining safe practices because that is how we will beat this disease,” said Dr. Park.