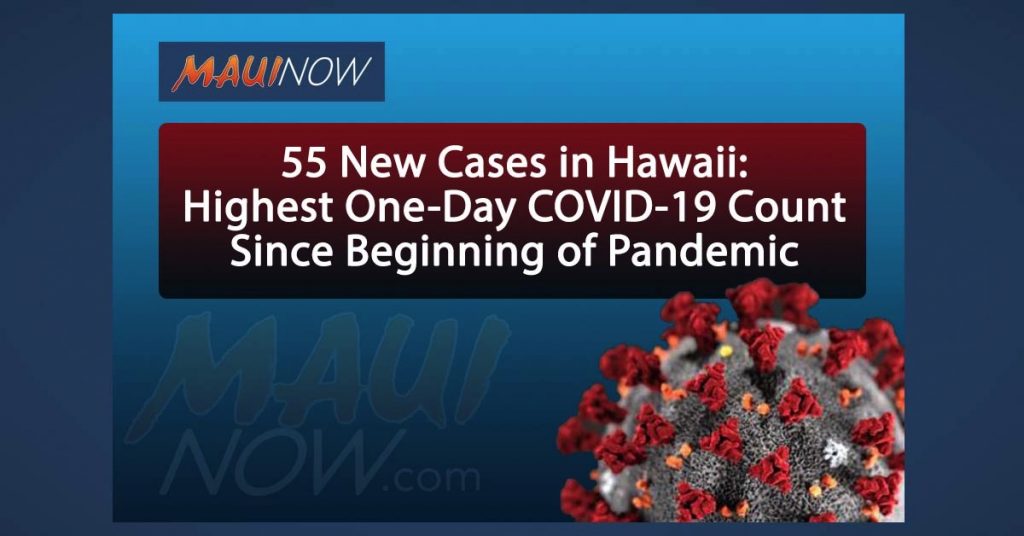 The state of Hawaiʻi Department of Health is reporting 55 new COVID-19 cases in Hawaiʻi today–that’s the highest single-day count for the state since the start of the pandemic.

The new COVID-19 cases include: 50 on Oʻahu; three on Hawaiʻi Island and two on Maui.

The previous highest one-day count was on July 11, with 42 cases.

Health Director Dr. Bruce Anderson said, “These cases represent people from all walks of life and varied professions, indicating the apparent challenges of maintaining safe practices is widespread across the state.”

Anderson also extended condolences to the family and friends of the 26th person to succumb to coronavirus, an elderly O‘ahu woman. Her death was reported to DOH late Wednesday and is included in today’s recap.

DOH continues to track and investigate numerous clusters. State Epidemiologist Dr. Sarah Park said, “Most cases are occurring as a result of people socializing and getting together either with work colleagues, extended family, or friends in multiple type of settings—without wearing face coverings or distancing. I continue to hope all in our community will maintain safe practices, but unfortunately the persistence of new cases would argue against that.”

The safe practices that the DOH encourages consistently are:

“Regrettably,” Dr. Park said, “many of the cases we’ve seen in recent weeks suggest that one or more of the safe practices were not being followed by individuals or groups of people. Hawaiʻi has done better and can do better; we all need to remember to maintain the safe practices in this COVID world.”

Both Dr. Anderson and Dr. Park continue to consult with and advise Governor Ige and his leadership team on the nexus between the public health crisis and the need to restore Hawai‘i’s economy as quickly as possible.

“Unfortunately, if we can’t get these numbers headed in the right direction, we may be facing the re-implementation of restrictions. No one wants that to happen and this is why it is so critical that everyone does their part, every day, everyplace in practicing safety for the sake of the health of all in Hawaiʻi,” said Anderson.

Further information is expected during a media briefing scheduled for 1 p.m. today. 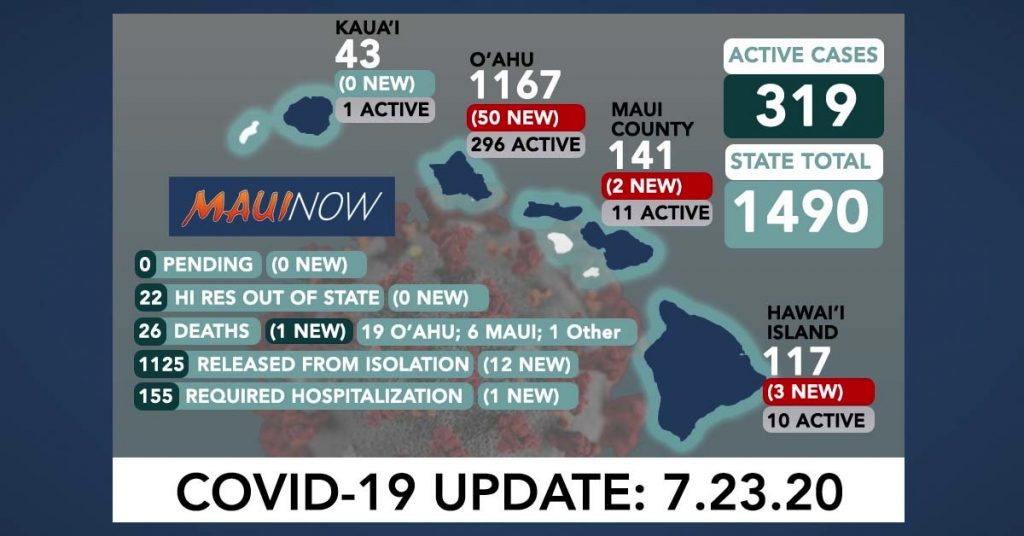 Today there were a total of 55 new COVID-19 cases in Hawaiʻi for a total of 1,490 reported over the course of the pandemic. The new cases include 50 on Oʻahu, three on Hawaiʻi Island and two on Maui.  There are currently 319 active cases in the state, including 11 on Maui.

The state also reported a 26th person has died of coronavirus. Health officials say the patient was an elderly O‘ahu woman and her death was reported to DOH late Wednesday. Prior COVID-19 related deaths are posted here.

The Hawaiʻi State Department of Health reports that there were 155 cases (11%) that have required hospitalization.  At least 1,389 patients (93%) were residents.

To date, there have been 26 COVID-19 related deaths in Hawaiʻi, including 19 on Oʻahu, six in Maui County, and one Kauaʻi resident who was hospitalized in Arizona. Hawaiʻi has a mortality rate of 1.7 deaths per 100,000, according to Lt. Gov. Green.

In Maui County, cases with onset in the last 28 days have been in the Lahaina, Makawao, Kīhei and Kula zip codes.  Of the 141 cases documented in Maui County over the course of the pandemic, Wailuku, Kahului and Lahaina had the most cases (more than 20 cases each); followed by Kīhei (11-20 cases); Makawao and Spreckelsville (6-10 cases); and Kula, Hāna, Haʻikū and Molokaʻi (1-5 cases each).