An investigation is underway into the death of a 44-year-old male officer with the Maui Police Department.

Upon arrival, officers found the man with what appeared to be a self-inflicted gunshot wound, according to police reports. The individual reportedly died on scene and was identified as a member of the Maui Police Department.

Police say the man was off-duty at the time of the incident.

*Video above is a procession to the Wailuku Forensic Facility following the incident. 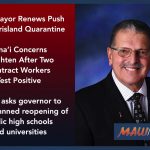 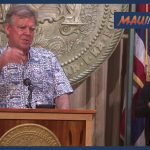 New Metrics Aimed at Better Tracking and Management of Pandemic