Maui Businesses Continue to Close and Struggle as Pandemic Drags On 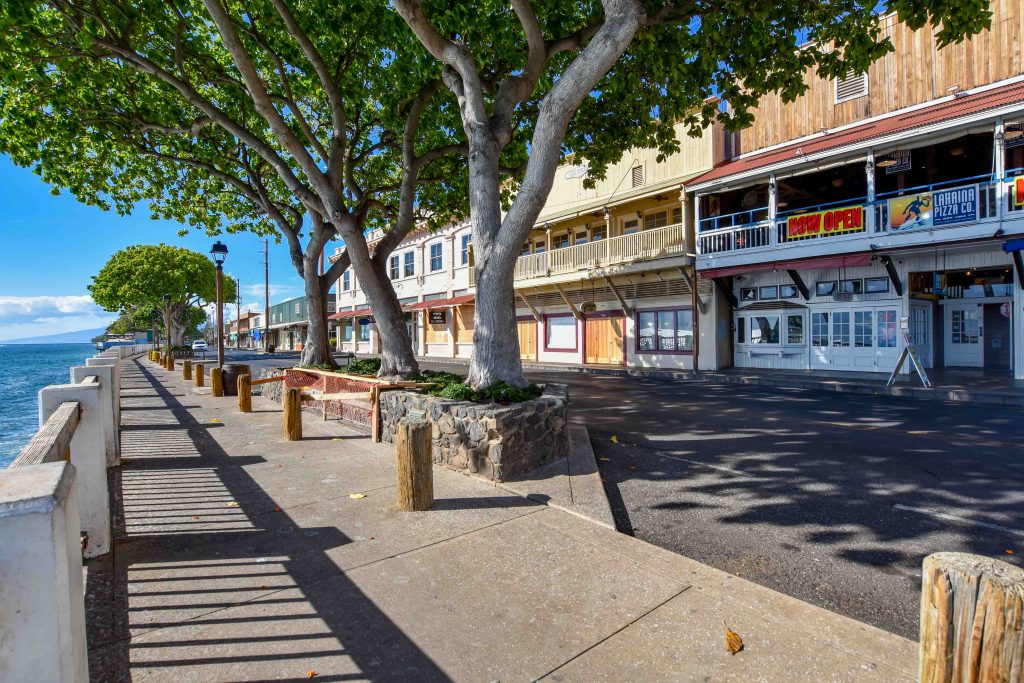 Front Street in Old Lahaina has been a ghost town during the coronavirus pandemic. Photo credit: Cammy Clark

Ten years ago, Clarance “CJ” Hookano began selling poi and laulau house-to-house with his daughter and mom. The Hawaiian dishes were so good it led to catering gigs and, in 2013, the opening of Poi by the Pound in Kahului. The restaurant became popular with both tourists and locals.

But then along came the COVID-19 pandemic, with the ensuing shutdown, mandatory quarantines, social distancing and health risks. After months of trying to survive, Poi by the Pound will serve its last squid lūʻau on Sept. 27 and close its doors – maybe for good. Hookano said the reason is simple: “No money.”

Hookano is not alone. At least 15 other Maui businesses, including eight restaurants, already have shuttered for good due to the economic woes of the pandemic. Valley Isle Seafood’s last Facebook post of June 12 said: “I wish RIP meant Return If Possible.” Jini’s Fijian Curry in Wailuku closed in July after seven years in business due to revolving operating costs that could not be met.

It doesn’t matter how good your food is, Hookano says, if you can’t pay the rent, or your employees and vendors. His self-made business’ income has declined more than 80 percent since March, when the state’s mandatory closure of restaurants struck. Recovery has been tough with the state’s current mandatory 14-day quarantine still keeping tourists away and with many of his loyal kamaʻāina customers left with money issues of their own.

Many more Maui businesses are teetering on the brink, as government assistance programs for small businesses dry up and the pandemic drags on.

“We are literally hanging on by our fingertips,” said Josh Curi, owner of Da Babooze Bar in Wailuku. “Thankfully our landlord is working with us as best he can, and our loyal regulars are trying to support us.”

But for how much longer he can hang on, Curi doesn’t know, saying: “It’s day by day.”

There was some good news for businesses Wednesday. Gov. David Ige announced that Hawaiʻi’s pre-travel testing program will launch on Oct. 15, after multiple delays. The testing program enables travelers to avoid the mandatory 14-day quarantine – basically if they can provide a negative state-approved COVID-19 test taken within 72 hours of arrival in Hawaiʻi.

Nowhere in Hawaiʻi is the loss of tourism felt more by businesses than on Maui, according to a joint survey in July by the University of Hawaiʻi Economic Research Organization and the Chamber of Commerce of Hawaiʻi. Of the respondents, 62 percent said their business was down 90 to 100 percent (essentially no revenue coming in).

“With all the uncertainty, the situation is extremely tenuous [for businesses],” Pamela Tumpap, president and executive board member of the Maui Chamber of Commerce, said in an email last week.

Old Lahaina remains a ghost town. Front Street was deadly quiet Monday, except for the blaring of NFL football on TVs and one lone musician playing reggae.

More than 120 businesses along Front Street were closed, and they have been for more than six months. Some already have closed for good. All that is left of Glass Mango Designs is a sign stating their sadness of having to close after 15 years at that site. (The company is still open at its Whalers Village site).

Some businesses already have packed up, with “For Lease” signs in the windows. Other businesses are still stocked with merchandise or equipment, but there is just no economical reason to reopen until the visitors return.

“We once thought the direct and indirect trickle down from the visitor industry was about 75 percent,” Tumpap said. “We now know it is much higher than that, and likely 85 to 90 percent.”

Curi said his Da BaBooze bar is a neighborhood hangout, with very few tourists. “But that doesn’t mean I’m immune,” he said. “When my regulars are hurting, I’m hurting.”

His bar with a 61-person capacity also must deal with a 50-percent limit for social distancing, and with his customers evaluating their own health risks due to the easily spreadable virus. “Three of our morning regulars are over 55 and we have not seen them come in for months,” Curi said.

Maui’s permanent business closures likely would have been far worse by now if not for government assistance programs, including the federal Paycheck Protection Program (PPP). It provided more than $2.4 billion in forgivable loans to more than 24,000 Hawaiian businesses, according to data released in August by the U.S. Treasury Department. But that funding has dried up for now.

In some cases, businesses have received funding from all three sources and are still “struggling to survive,” Tumpap said. “They are exhausting not only business, but personal financial resources to try and keep their businesses afloat. And, we are at a point now where many are completely out of money.”

The real impact of the business closures in Hawaiʻi likely has not caught up to the data so far. There have been 2,247 business dissolutions, terminations, cancellations and withdrawals from March to August 2020, according to the state Department of Commerce and Consumer Affairs. That is only 13 more than during the same timeframe in 2019.

But businesses file with DCCA annually, and do not have to file paperwork to dissolve immediately, said Jayson Horiuchi, communications officer with the department. So there is a lag time between when a business closes and when that closure is documented with the state. 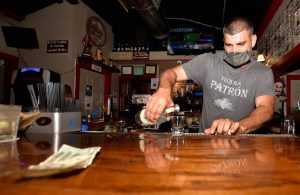 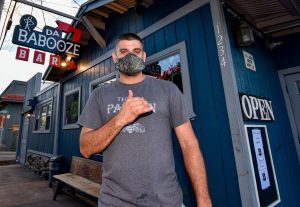 Da Babooze Bar owner Josh Curi said even though his clients are mostly locals, the business is not immune from the economic woes created by the coronavirus pandemic. Photo Credit: Cammy Clark 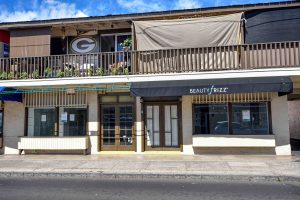 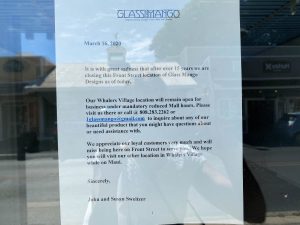 All that is left of Glass Mango Designs on Front Street is a sign thanking customers for their business. Photo credit: Cammy Clark 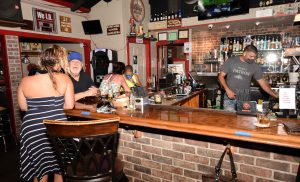 Capacity is limited to 50 percent inside Dabooze Bar in Wailuku due to the coronavirus pandemic. Photo Credit: Cammy Clark

Some struggling businesses on Maui are trying to sell and recoup whatever they can. They include the Surfing Goat Dairy Farm, the Mendes U Ranch, a paddleboard yoga company and a cozy bar 100 steps from the ocean.

“I’ve got about double the businesses for sale,” said Michael Capuano, owner of Mauibusinesses.com. “I usually have about 30 for sale, and now I’ve got about 60 and a lot of those are struggling. It’s just an asset sale, with no income coming in right now.”

Capuano said several Maui activity businesses are trying to sell, including a “kayak guy and three different dive companies that are kind of in a panic. Some have permits that are valuable. You can’t buy permits, but you can buy the corporation and change the officers in charge. Some own boat slips where there is a 10-year waiting list.”

With the vast majority of brick and mortar businesses on Maui operating in a leased location, many businesses simply can’t sell fast enough to avoid eviction. “I was trying to get $200,000 for one client but the landlord ejected him and inherited all his gorgeous improvements,” Capuano said.

In the July survey, 24 percent of Maui respondents said they did not believe their business would survive the pandemic – which was up from 9 percent in April. That 24 percent figure is only likely to have gone up with two more months of dealing with an economy trying to survive on minimal tourists – and with no idea when the visitors will be back anywhere near the record level of 3.07 million in 2019.

“As this continues each week and aid is not available, businesses are having to shut down,” Tumpap said. “While we hear more money may be coming down the pike from the federal government and CARES Act funding (which included the Paycheck Protection Program), timing is of the essence. If it doesn’t come in time, we will lose more businesses.”

On Wednesday, Poi by the Pound met with Maui Mayor Mike Victorino’s team to discuss the plight of restaurants that are struggling but don’t qualify for the current County grant program thresholds.

“We’re working on an additional program to be inclusive of some of these larger — when it comes to revenue driven businesses,” Victorino said. “We are looking at some increase in that area.  At this point we haven’t finalized that, but hopefully by Friday we’ll have some kind of announcement of a program that we set for those types of businesses. They’re local, but larger than the $2 million revenue.”

Hookano said he doesn’t know what the future will hold. For now, he is sad the closing of his restaurant has cost about 42 employees their jobs and will economically hurt the farmers who provide his taro leaves and the vendors that supply his vegetables and fish.  But he says he will bounce back: “I know my capabilities and our food is unique. I just got to live life on life’s terms. And now it is a big struggle.”