10 Days to Go: Ironing Out County Options Ahead of Pre-Travel Testing Launch 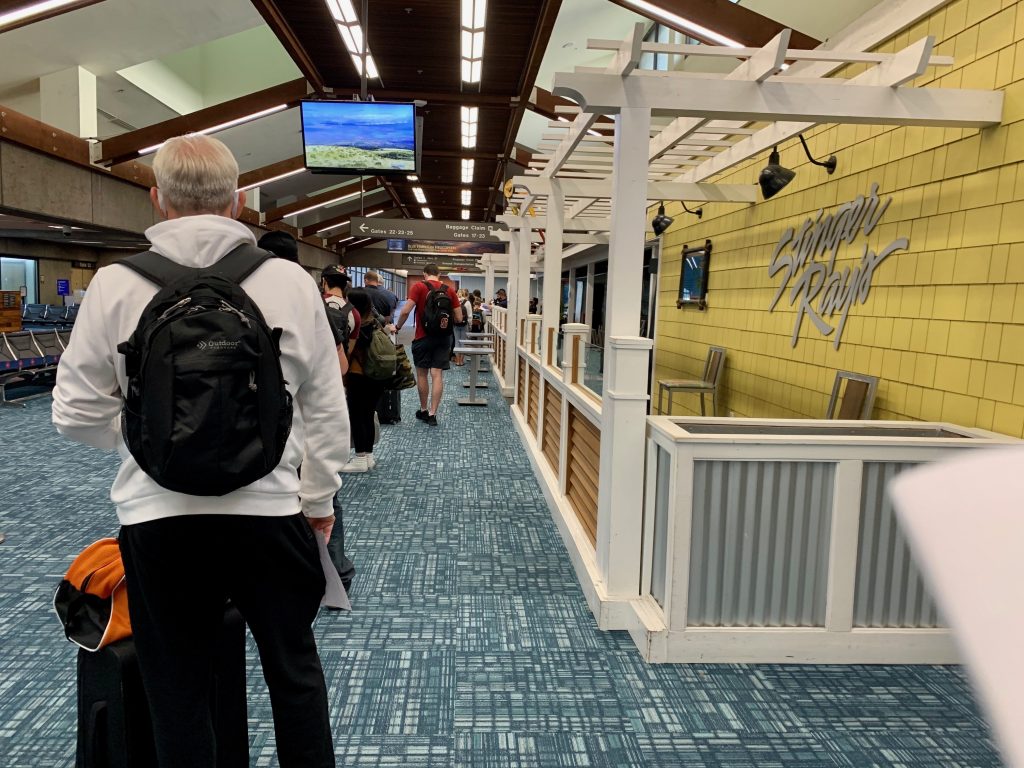 With just 10 days to go before the state’s Oct. 15 launch of its pre-travel COVID-19 testing program, counties across the state are ironing out how much they will or will not be involved.

The governor has already denied requests from Maui and Kauaʻi for post-testing proposals; however Maui Mayor Michael Victorino said, “even though he has denied the second test for incoming trans-Pacific travelers, he is still in favor of looking at some other alternatives.”

The Mayor could not elaborate on what type of alternatives were being discussed, but said he continues to push for secondary or “sandwich” testing for out-of-state arrivals.

“I’ve been working with the governor as far as the post travel testing.  I’ve been adamant about that since the beginning of this track that when we reopen that we’d have… post testing for travelers coming in. I still am in favor of a 72 hour pre-test; but when they get here… 72 hours after arrival, having them tested again,” said Mayor Victorino during an afternoon press conference on Monday.

“You know right now, the governor’s Safe Travels program basically says if you come in and you’re [within] 72 hours pre-test and negative, that you have the ability to traverse the islands and enjoy the beauty of the various islands.  But I’m still not really convinced that that’s the end-all,” he said.

“Many in the medical field… have consistently told me a secondary test is very paramount to ensure the safety and well being of not only the guests but the residents themselves–the workers having the ability to be tested every week that deal with these visitors,” said Mayor Victorino.

“I’m asking for some kind of means so that we can be sure our residents as well as our visitors feel safe and secure when the come and when they spend time here… Many of the travelers that will come to Maui are coming healthy… and they want to go home healthy.  And I want to protect our residents which is the priority in this whole debate,” he said.

“We’re going to reopen, yes, and we need to reopen so that our economy starts moving ahead… I have no qualms of opening up as of Oct. 15, however I want to make sure the safety and wellbeing of our community is still the priority,” said Mayor Victorino.

Mayor Victorino said the governor and the lieutenant governor will be addressing his concerns.

“They’ve assured me that they’re looking [out] for the safety for not only the state but for the people of Maui County… I hope by this coming Wednesday, I’ll make a firm announcement on what the program will look like,” said Mayor Victorino.

“We had our plan but it was shut down–but he has agreed to look at it [alternative plans] and make revisions and see if we can do it safety, protecting our guests as well as the residents of Maui County.

Mayor Victorino said he is looking at acquiring 20,000 rapid tests as part of his secondary testing proposal.

To date, the County has ordered rapid tests, but has only received a “very small portion,” according to the mayor.

“Some of that is still being held up for other areas of the state. I just don’t want to knock anyone for what they’re doing.  I understand the importance.  The Big Island has had a big uptick and I understand that some of those tests were needed there, and I wholeheartedly agree–because I had an uptick and I needed tests, I’d want those tests to be sent to us.  So I’m all for what’s happening now,” he said.

Mayor Victorino noted that Maui County is ordering more tests on its own outside of what the state is doing.

“Those should be arriving very shortly, and we’ll have the capability of–at least the first 45 maybe even up to 60 days of secondary tests,” said Mayor Victorino in reference to his proposed program that he is still trying to work out with the state, the governor and the lieutenant governor.

As for interisland travel, Mayor Victorino says he’s still adamant about a pre-test, but no post-test for travel between counties.

“As far as outside residents coming in from the Big Island, from Kauaʻi and or Oʻahu, yes, pre-tests 72 hours proven negative–that’s something I would like… except for essential workers–people that are coming to Maui for work, and for medical services and vice versa,” said Mayor Victorino.

For Maui County residents, he’s looking to ease restrictions for travel to other islands within the county by seeking approval for travel without a test or quarantine.

“[For] those who are Maui County residents, I am making sure that so long as they are traveling within our county–because we’re the only county that travels interisland, between our islands–that they are not quarantined or will not be forced to quarantine and will not have to take a test because they have to go to Molokaʻi… to do some work and come back.  Is it essential? Sometimes it is, but sometimes it may be just doing a certain task that needs to be done.  I want to make sure that our County residents are protected in that respect,” said Mayor Victorino.

Maui Theaters Get Approval for Reopening With Precautions in Place

Today marks the first day that theaters can resume operations in Maui County with written approval by the Mayor and with guidelines in place.

Mayor Victorino said he couldn’t answer the question as far as Regal’s announced closures of 536 theaters nationwide, but said all of the theaters that requested approval to reopen on Maui were granted permission.

“I can’t answer the question as far as Regal’s nationwide closing.  I know Regal was one of the companies that have said that along with Consolidated that both wanted to open up theaters with physical distancing and all of these other aspects, no food being served–all of what I felt was very important to give them an opportunity to start up,” said Mayor Victorino in response to our request for comment.

“I do not know if any of the Regal theaters here in Hawaiʻi are slated to be closed like they had mentioned nationwide so at this point I’m going to say that all of the theaters that have asked, I have granted them the ability to reopen with all of the physical distancing and sanitation as well as non-service of food at the theater,” he said.