The Hawaiʻi Emergency Management Agency has issued preparedness information as Guillermo continues on a path towards the state.

The agency says Guillermo continues to weaken, with the current forecast showing the potential for Tropical Storm force winds arriving as early as 7 a.m., Wednesday on Hawaiʻi Island.

The National Weather Service issued a hydrolic outlook saying heavy rain and flash flooding are possible on Wednesday and Thursday.  According to NOAA, the latest forecast for Guillermo takes the system over the island chain as a tropical storm.  While Guillermo is expected to be moving steadily west northwest as it passes across the island chain, forecasters say, “abundant moisture drawn into the circulation will bring the potential for very heavy rainfall and flash flooding on Wednesday and Thursday.”

Details on the timing, location and amount of rainfall remain uncertain and are highly dependent on the eventual track of Guillermo, according to the NWS hydrolic outlook.

The following preparedness advice was issued to assist residents and visitors in advance of the storm: 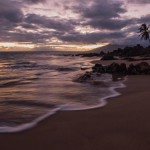 ARTICLE COMMENTS ( 30 )
This comments section is a public community forum for the purpose of free expression. Although Maui Now encourages respectful communication only, some content may be considered offensive. Please view at your own discretion.
I Understand, Show Comments