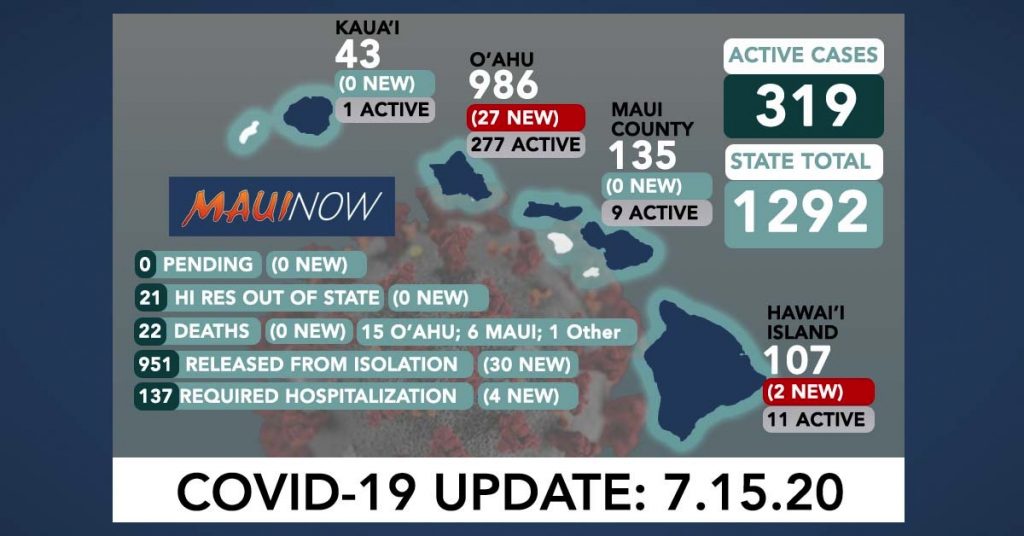 There are 29 new COVID-19 cases reported for Hawaiʻi today, including–27 new cases on the island of Oʻahu, and two new cases on Hawaiʻi Island.  This brings the statewide count to 1,292 cases in Hawaiʻi over the course of the pandemic.

The state Department of Health also reports that as a result of updated information, one case from Honolulu was removed from the counts.

The majority of new coronavirus cases reported by DOH today are associated with community-spread. All but two of the new cases involve adults. As of July 14 at 4:30 p.m., there were 31 people hospitalized for COVID-19 in Hawaiʻi.  There were 1,830 additional COVID-19 tests reported via electronic laboratory reporting for a total of 99,387 tests conducted statewide to date. (14 test results were inconclusive and 98,083 were negative).

The Hawaiʻi State Department of Health reports that there were 951 individuals released from isolation; and 137 cases (11%) that have required hospitalization.  At least 1,158 patients (92%) were residents.

The Department of Health Disease Outbreak Control Division on Monday reported three deaths of Hawaiʻi residents from coronavirus.  These three cases bring to 22 the total number of COVID-19 related deaths reported in Hawaiʻi since the pandemic began.