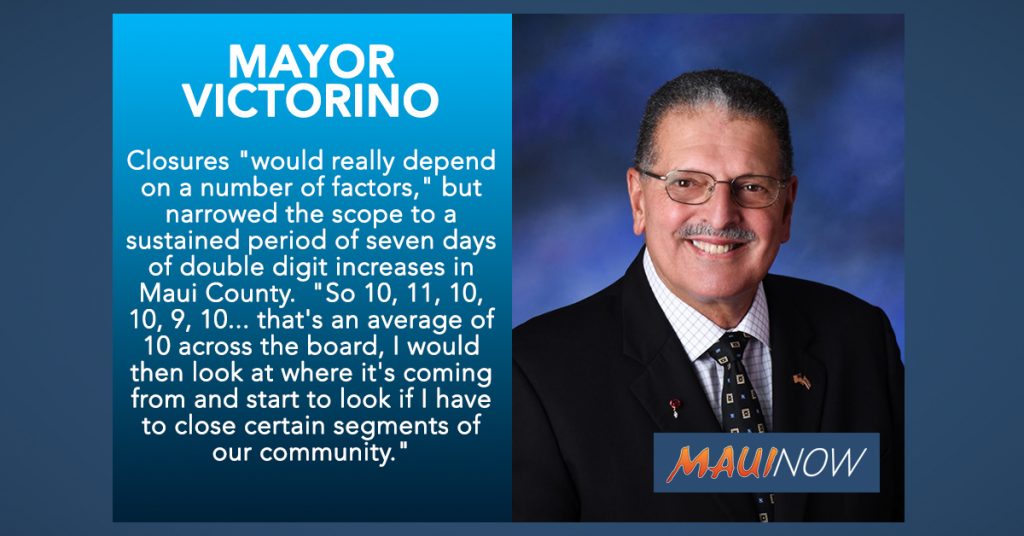 Maui Mayor Michael Victorino revised his threshold upward for the number of COVID-19 cases Maui would need in order for him to reinstate closures.

He said any closures “would really depend on a number of factors,” but narrowed the scope to a sustained period of seven days of double digit increases in Maui County.  “So 10, 11, 10, 10, 9, 10… that’s an average of 10 across the board, I would then look at where it’s coming from and start to look if I have to close certain segments of our community.”

Two days ago, he identified a lower threshold of 5-7 cases over a sustained period, but revised that number upward yesterday during a media briefing in which he explained that Maui would be experiencing a bump in cases in the coming days due to accumulated data over the past week.

With the revised number, the Mayor will also look at where cases are coming from and if there are any hotspots to determine if there is reason to close certain segments of the community. ”

“Many of you have been doing a great job.  This is why I have not shut down Maui like they did on Oʻahu–primarily because we haven’t had big numbers, but… they’re out there, it’s just that our system hasn’t brought them up,” he said in reference to a projected bump in numbers this week.

Today, there are a total of 355 newly diagnosed cases today, a record single day case count since the beginning of the pandemic. This includes 85 cases that are part of a cluster at the O‘ahu Community Correctional Center facility. Today’s case count includes 343 cases on O‘ahu, seven on Maui, four on Hawai‘i Island and one on Kaua‘i.

Mayor Victorino took a moment to thank the businesses in the Kīhei Kalama Village in South Maui for temporarily closing to protect employees, patrons and residents.

“There was one active case that was found and they immediately self quarantined and closed down everything.  They’ve been cleaning up and I really appreciate that,” said Mayor Victorino.