Maui Mayor Michael Victorino is providing updates on Pacific Media Group’s network of Maui stations as the County continues to adjust to the COVID-19 pandemic.  Today, the mayor spoke with Ed Kanoi and Charly Espina-Takahama of 99.9 KISS FM on Maui, and shared his thoughts on rural response, increased testing this week, and issues surrounding the hospital cluster at Maui Memorial Medical Center.

The COVID-19 cluster at Maui Memorial Medical Center has grown to 34 individuals under investigation, according to an update provided by the state Department of Health. This includes two healthcare workers and one patient.  The cluster includes all individuals identified as positive within the time period of concern, and could include some cases that represent separate introductions.  That cluster is made up primarily of hospital employees and is the largest cluster identified in the county out of 86 cases confirmed.Hawai‘i COVID-19 Cases Exceed 500 – Only Five in Latest Report

The statewide count now exceeds 500, with only two new cases on Maui yesterday; however Mayor Victorino cautioned that the low number is likely because results are not yet in for ramped up testing conducted in Maui County.

“We believe there’s an uptick coming because of the vast number of tests that have been and will be conducted over the next week or so.  But I think it’s important that we find out right now if there’s clusters–that we take care of those clusters and prevent spread all around,” said Mayor Victorino.

“As a reminder, our counts will continue to grow, I believe because of the amount of uptick in testing. We have done almost 1700 tests–almost 2,000 tests in the last week,” said Mayor Victorino.

A second round of testing begins today (Tuesday, April 14) with a site set up at the Mitchel Pauʻole Center on Molokaʻi.  Testing runs from 9 a.m. to 3 p.m.  All traffic MUST enter Ailoa Street via Kamehameha V Highway, between Kaunakakai Baptist Church and Kaunakakai School.
Lahaina Testing, Wednesday, April 15
Then TOMORROW (Wednesday, April 15), testing will take place in West Maui at a drive through site located on the Honoapiʻilani Highway by Launiupoko.  (More details on direction of entry will be announced later today). The first two hours between 8 and 10 a.m. are for first responders and health care workers only.  Starting at 10 a.m., testing is open to the general public.West Maui Food Distribution, Thursday, April 16
ARTICLE CONTINUES BELOW AD

Food Distribution is planned on Thursday, April 16 at 10 a.m. in West Maui at the same location as the drive through testing from the day before–on the Honoapiʻilani Highway in Launiupoko.

B&B and STR Homes May Only Rent to Essential Workers

The Mayor also announced the Bed and Breakfast and short term rental homes are NOT allowed to operate unless the home is rented by an essential worker.

“No new reservations are allowed, and if violations are found citations will be issued,” said Mayor Victorino.

The rules are among stricter guidelines being enforced to prevent the spread and further introduction of COVID-19 in the Maui Community.  Air arrivals to Maui totaled 11 on Sunday with a single flight arriving from out-of-state. This included 6 crew members, 4 residents and 1 visitor.
Alternate Easter:
Mayor Victorino reached an Easter compromise with a local congregation after issuing and then rescinding permission for a car sermon.  The service at Kings Cathedral turned into a food distribution event on Sunday in celebration of the holiday.
“I apologize for any confusion, but as things evolve, the number of cases rose very much on Friday, if you remember, there were 14 cases, and so there was some expediency in changing the rules to make sure that we would have a safe weekend,” said Mayor Victorino.
Health officials had mentioned a church cluster on Friday, but did not say what island it was on, what group it affected, or the extent of the cases. The Mayor said he could not divulge information about a second cluster on Maui, but said he is working with the health department to better understand and had mentioned it as part of his reasoning for urging groups over the weekend to shift from live services to social media. 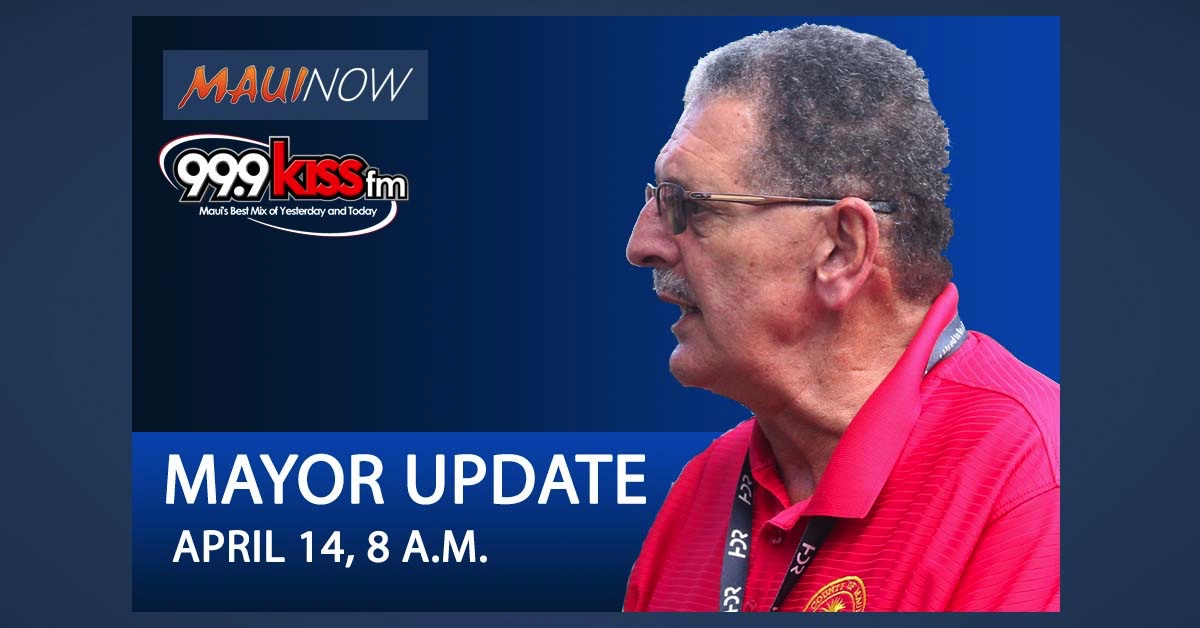