For First Time in Eight Weeks, No New Coronavirus Cases in Hawai‘i 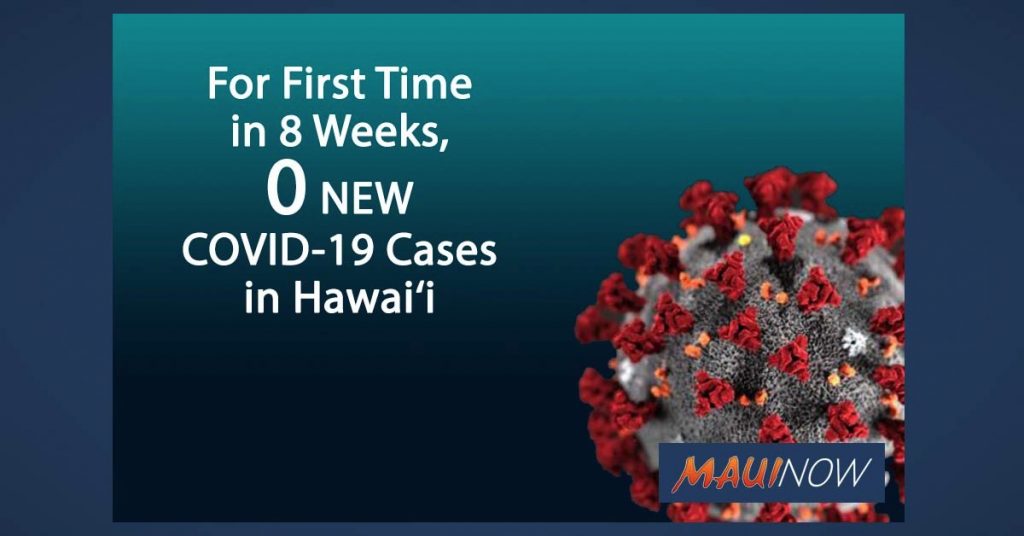 For the first time in eight weeks, there have been no new reported cases of coronavirus in Hawaiʻi.  The state’s total count remains unchanged from yesterday at 629 confirmed positive individuals.

The state began identifying cases on Feb. 28, 2020 and the last time before today that 0 new positive cases were reported was on March 13, 2020.

“While this is good news, it does not mean, in any way, the end of the COVID-19 crisis,” said state health officials.

Hawai‘i State Epidemiologist Dr. Sarah Park said in a press release, “We have seen a steady decline in new cases over the past several weeks, although today we’re at zero, we want to maintain these declines. As businesses reopen, as people become more active and travel more freely, we will inevitably see an increase in cases.”

According to the DOH, health experts indicate that “while Hawai‘i is fortunate to have this pause, it should be used to reassess response capacity, preparedness plans, and to ensure the state is ready for a second and potentially larger wave of the disease.”

State officials say that “of particular concern now, is Hawai‘i residents resuming travel to the mainland, particularly to COVID-19 hotspots.” Dr. Park said, “Travel continues to pose a risk for the spread and reintroduction of the coronavirus. This risk is not just posed by visitors. Residents can actually pose a greater risk by unknowingly infecting others. When people travel for entirely appropriate and necessary reasons (work, healthcare, significant family events) they can inadvertently bring the infection home.”

Park and other health experts say this is why it is “critically important” for everyone (visitors and residents) to observe the mandatory traveler 14-day self-quarantine. “It protects our community,” health officials said.

State health officials emphasized that Hawai‘i is not a “me first” culture, but a culture of “we.”  “This philosophy is what has allowed control of the COVID-19 pandemic up until this point. Hawai‘i residents particularly respect our kupuna and others who may be more susceptible to this serious disease,” department officials said.

For that reason, DOH says the strongest defense we have against future, rapid increases in COVID-19 cases is dependent on everyone’s consistent observation of safe practices including: 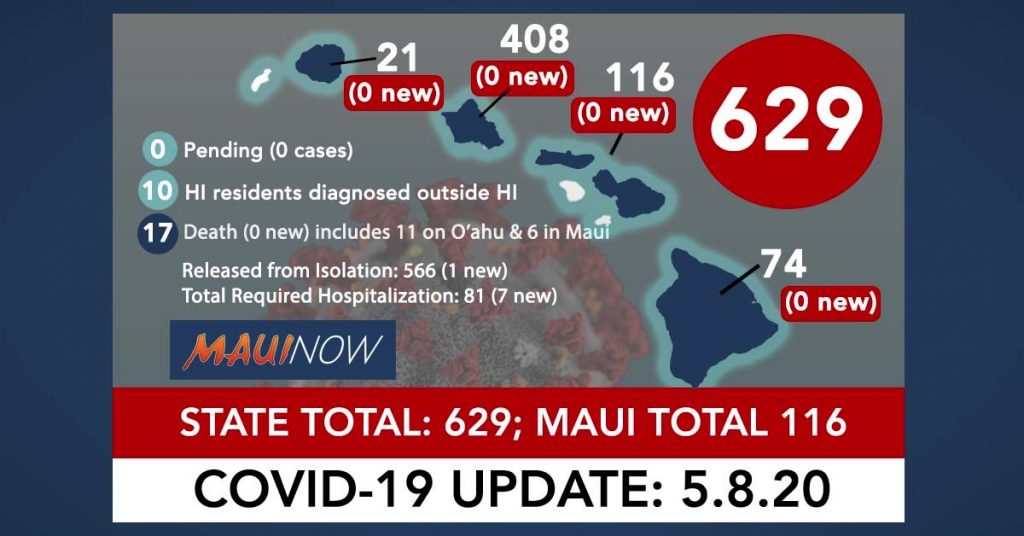 To date, 566 people have recovered including 93 in Maui County.

The Hawaiʻi State Department of Health reports that there were 566 individuals released from isolation; and 81 cases (13%) that have required hospitalization. A total of 569 patients (90%) were residents.

Maui County’s count remains unchanged from yesterday. Of the 116 cases in Maui County, at least 93 have been released from isolation, and 22 have required hospitalization.

As of today, there were more than 36,262 individuals tested by clinical and state laboratories.  Of that number, 35,633 were returned negative. In Maui County, a total of 6,670 tests were returned negative to date.  *(Note: The state Department of Health reports that a technical error in the ELR reporting resulted in over-counting of some tests over the past week. The issue has been corrected). 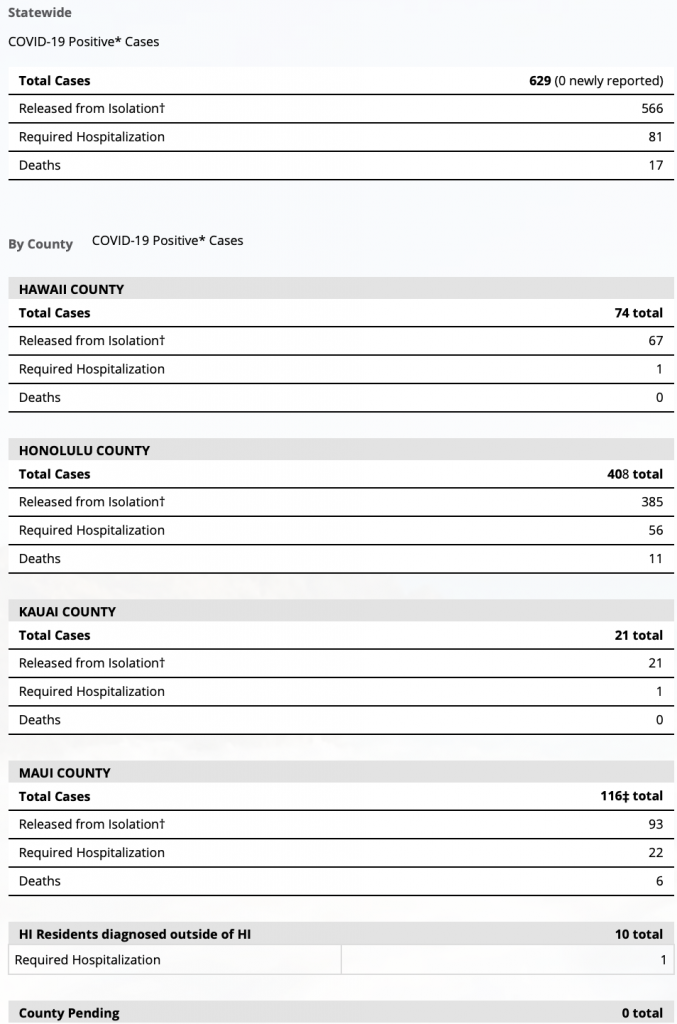 †Includes cases that meet isolation release criteria (Isolation should be maintained until at least 3 days (72 hours) after resolution of fever and myalgia without the use of antipyretics OR at least 10 days have passed since symptom onset, whichever is longer.), have died, or have left the jurisdiction.