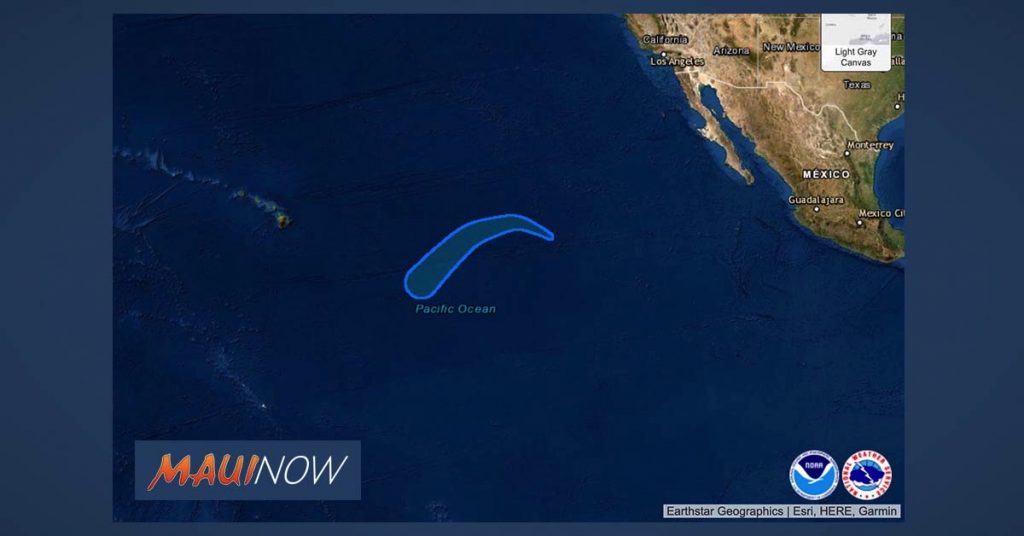 A new tropical depression SE of Seven-E (now identified as Tropical Depression Eight-E), also in the Eastern Pacific (about 905 miles SW of the southern tip of Baja California) is forecast to become a tropical storm later today or tonight.  We will continue to track both systems and provide updates of significance.

The NHC says the system is expected to be a “short-lived tropical cyclone that will degenerate into a remnant low by Tuesday morning.”

At 11 p.m. HST on Sunday, July 19, the system was located about 1300 miles WSW of the Southern Tip of Baja California and had maximum sustained winds of 35 mph.  There is little change, if any, in the strength forecast over the next two days, according to the NHC forecast.

It was moving toward the NW near 12 mph–a motion that is expected to continue through Monday night, followed by a turn to the west by early Tuesday.

The NWS National Hurricane Center issued a Tropical Cyclone Discussion on Sunday night saying, “Although it is possible that  the system could hold on to tropical cyclone status a little longer  than currently indicated, especially when the system moves southwestward toward warmer water, moderate to strong southwesterly vertical wind shear should cause the small cyclone to dissipate by 96 hours.”

The hurricane season in Hawaiʻi runs from June 1 through November 30. The National Oceanic and Atmospheric Administration’s Central Pacific Hurricane Center is predicting a near normal 2020 hurricane season. For the season as a whole, 2 to 6 tropical cyclones are predicted for the Central Pacific basin. This number includes tropical depressions, named storms and hurricanes.