Leaders of the demonstration on Maunakea produced a new video on Tuesday, detailing allegations of what they claim is law enforcement misconduct.

Leaders from the group Puʻuhonua of Puʻu Huluhulu claim an officer serving at the demonstration site purposefully shared false information that they say had a high potential to provoke conflict between protectors.

Members say they do not know whether the officer’s actions were his alone or part of a larger law enforcement effort; but the group provided a list of actions taken over the past 10 days that they say amount to a “concerted effort” to sway public opinion against protectors, and provide justification for forceful action.

The list includes: Sheriffs shining high beams on kūpuna at 1 a.m. on Monday, Sept. 9 and Tuesday, Sept. 10 “for no apparent reason”; A blackhawk helicopter flying at a low-level over the kūpuna tent on Maunakea Access Road on Tuesday, Sept. 10; and groups of six to seven police vehicles staged in different areas near the Puʻuhonua over the last several days “with no communication about their purpose, raising further anxiety.”

Leaders also say the manner in which a Hawaiian flag was removed by power saw from an unpermitted structure on Sept. 6, suggests “an apparent attempt to inflame anger” and test the group’s ability to carry out their practice of “Kapu Aloha.”

“We will not be provoked or distracted from our purpose, which is peaceful protection of Maunakea,” the group said in a press release statement.

Leaders with the movement at Maunakea say they have video and audio documentation and are asking for a federal investigation into the officer’s actions.

Mikey Glendon said that on Sept. 4, he was served with a notice to remove the unpermitted learning center which he admittedly took part in.  On Sept. 6, the building was demolished.

“Two days following that incident, I was approached by a police officer whom I met in private, and I asked him, ‘Why was it such an abrupt situation where they demolished our learning center?’ His response to me was, that they received a phone call from Puʻu Huluhulu that stated that I was in the learning center with a gun, with children, ready to shoot it out with the police, with respects that I am protecting the children.  That is false,” said Glendon.

During followup conversations with the same officer, Glendon said he was informed that the alleged tip came from within the Puʻu Huluhulu community and the officer went on to name Noenoe (Kekaulua) and Earl (DeLeon) as the people who called in the information–allegations that were publicly refuted in the video release.

“We would never, never ever do something as irresponsible as that–to call in and make a false statement,” said DeLeon who appeared together with Kekaulua, noting that such action would be “irresponsible and unacceptable,” and he would never take such action to jeopardize the security of the Puʻu Huluhulu community. 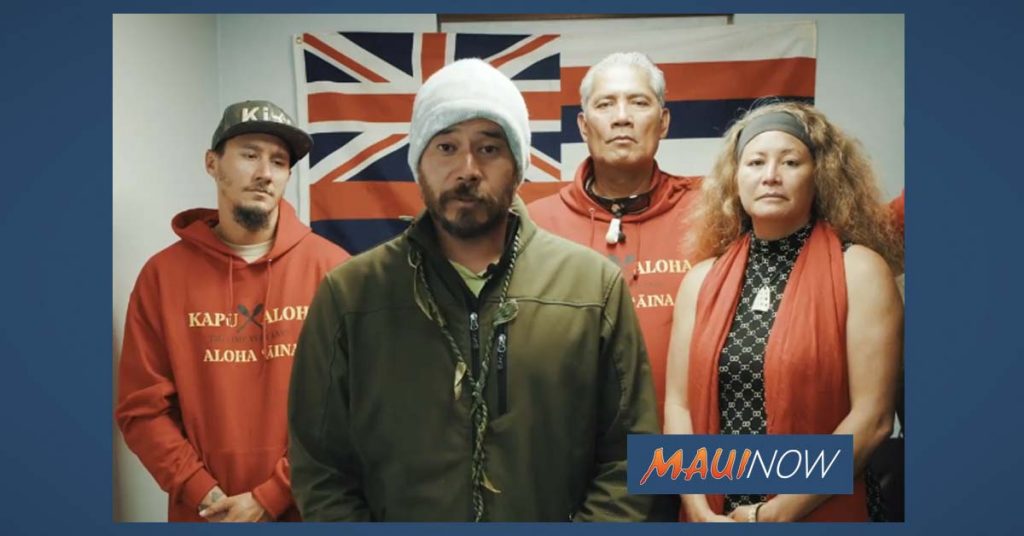 The allegations come on the heels of a news conference called by Gov. David Ige at the State Capitol on Friday to discuss the ongoing conflict at Maunakea and to dispel what state officials called “false narratives.”

During the Governor’s press conference the state Attorney General reviewed a list of examples of social media posts where the the state alleges the author(s) either threatened someone or “attempted to impact the ability of a public servant to engage in their public service duties.”

During the event, AG Clare E. Connors said, “Law enforcement is not the enemy here.”  She went on to say, “No one on any side of the current issue deserves to be targeted with threats or other forms of harassment.”

On Monday, Sept. 16, Gov. Ige issued a statement on his Facebook page saying:

“If the activists say there’s no compromise, then it leaves the state with few options. We will enforce the law while making people aware of the facts that have been part of this decade-long legal process. A lot of misinformation is being circulated so we want to provide factual, accurate details so people can base their opinions on sound information rather than rumors. We encourage everyone’s patience as we work to find a peaceful way forward that respects community concerns and deeply held feelings.”

In an earlier statement, Andre Perez, one of the leaders at Puʻuhonua Puʻu Huluhulu said, “We will always put that message out.  We are a peaceful, non-violent movement, rooted in Kapu Aloha.  We do not support violent language.  We know that that undermines and hurts both sides.  We are trying to find a peaceful resolution.  We are firm in our commitment to protect the Mauna, to engage in civil resistance that is rooted in peace and non-violence; and we will maintain that position consistently.”

The demonstration at Maunakea began in mid-July, amid the planned start of construction of the Thirty Meter Telescope.   Just days into the demonstration, 38 people were arrested, the majority of which were kupuna (elders), “after refusing to comply with a lawful order to clear the road.”

Since then, the Department of Land and Natural Resources chair Suzanne Case revised the deadline to initiate construction of the Thirty Meter Telescope project to Sept. 26, 2021.

A building permit for the Thirty Meter Telescope has been filed at an alternate site in the Canary Islands, but project executives say Maunakea remains their “preferred” site.

The demonstration is now in week nine.