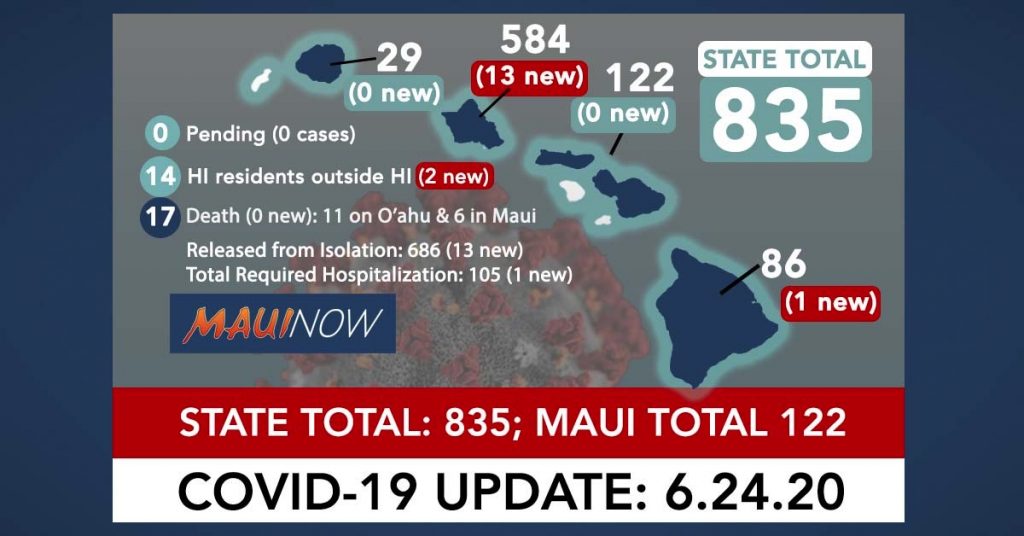 There are 16 new COVID-19 case reported for Hawaiʻi today–13 of them on Oʻahu, one on the Big Island of Hawaiʻi, and two Hawaiʻi residents who were diagnosed outside of the state–pushing the statewide count to 835 cases in Hawaiʻi over the course of the pandemic.

The Kaua‘i District Health Office today also reported four new positive cases of COVID-19, however these Kaua‘i cases were reported after the noon update and are not included in today’s state total. The Kaua‘i cases bringing the county’s total number of active cases to 12, and the cumulative total of cases to date to 33.

The new Kaua‘i cases include an adult and three children from one household who are now in isolation. Other members of that household are in quarantine. The eight previous positive cases on Kaua‘i, which were identified last week, are from a separate household and also remain in isolation.

“All the individuals are either mildly ill or asymptomatic. So far no one has required hospitalization,” said Kaua‘i District Health Officer Dr. Janet Berreman. These new cases were identified through the state Department of Health’s ongoing contact tracing process. As a result of that contact tracing, DOH is continuing to identify, test, and quarantine additional contacts. Officials will continue to receive test results over the next few days.

The Hawaiʻi State Department of Health reports that there were 686 individuals released from isolation; and 105 cases (13%) that have required hospitalization. A total of 750 patients (92%) were residents.

A separate quarantine in place for interisland travel was lifted on Tuesday, June 16.  This applies only to air travel within the state, and anyone arriving into the state would still be subject to a 14-day quarantine through at least the end of July.  As the state lifts the interisland quarantine, it has implemented rexzthermal screening, a new interisland travel form and a more robust contact tracing program.