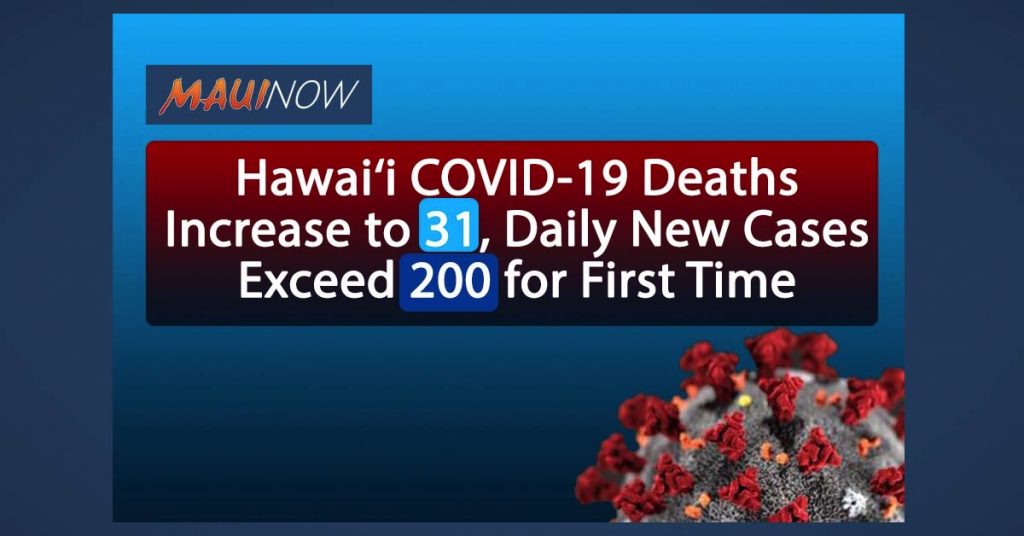 All but one of the 201 newly diagnosed COVID-19 cases, reported by the state Department of Health today, are from O‘ahu. Maui has a single new case.

Health Director Bruce Anderson said, “Unfortunately, projections for increases in COVID case and ICU bed utilization are being realized.”  Many of the Intensive Care Units on O‘ahu are full or close to full and hospitals are surging, transferring patients, and opening new units to handle new patients, according to department officials. The Department of Health says ICU bed use on the Neighbor Islands has not changed significantly to date.

Yesterday, Governor Ige and Mayor Caldwell announced restrictions on large group gatherings, the closure of beaches and parks, and the reinstitution of a mandatory 14-day quarantine for all travel from Oʻahu to the Neighbor Islands. “These actions are targeted toward what we know to be high risk activities,” said Anderson.

“Given the incubation period of COVID can be as long as 14 days, we are seeing the result of exposures a week or two ago and it will probably be at least a couple of weeks before we can expect to see the benefit of the restrictions on these activities and events on O‘ahu,” said Anderson in a press release. “We all need to act now. Avoid crowded places, closed spaces and close contact. Your life and the lives of your loved ones and friends will depend on it.”

For a second day in a row, DOH is reporting two deaths, as a result of the COVID-19 infection. Dr. Anderson extended sympathies to the family and friends of the latest victims.  “Their passing’s are a stark reminder of the realities today. Unfortunately, we are going to see more and more casualties as the surge of cases over the last few weeks continues and, sadly, more and more families and neighborhoods will experience the loss of loved ones.”

Both of the latest victims are men from O‘ahu, and are said to have had underlying medical conditions.  Health investigations into their deaths continues.

Public health officials, including State Epidemiologist Dr. Sarah Park, have warned that people getting together in social settings, “whether it be on the beach, in a park, in a home, or anywhere else have let down their guard down and fail to maintain safe practices, which will inevitably further the spread of this virus.”

On Thursday, State and County leaders issued a renewed plea for everyone to take personal responsibility and to maintain safe practices to stop the surge. They are also stepping up enforcement of emergency rules, by putting more police officers into the field to aggressively enforce the renewed restrictions in Honolulu, which includes the closure of all 300 county and state beaches and public parks on Oʻahu.