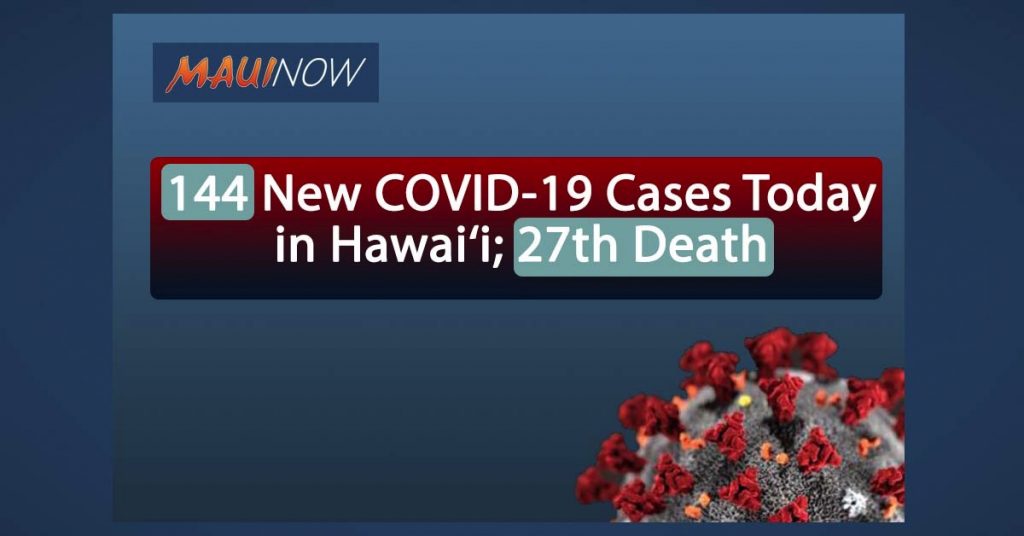 The state Department of Health reported a COVID-19 related death today in a Honolulu man with underlying medical conditions.  Department officials say the man was in the 40 to 59-year-old age group and had tested positive for COVID-19. An investigation into his cause of death continues, and it is recorded as the 27th COVID-19 death in Hawai‘i since the beginning of the pandemic.

Health Director Dr. Bruce Anderson said, “We all extend our condolences to the family and friends of this man. Every death reminds us how very serious this disease is. Coronavirus can strike down anyone of any age. We can all protect each other and prevent more hospitalizations and deaths.”

The Department of Health is also reporting another triple-digit-day of new coronavirus cases in the state. A total of 144 cases were reported today, including 139 on O‘ahu and five on Hawai‘i Island.

State health officials say “the numbers demonstrate that this is not the time for anyone in Hawai‘i to be letting their guard down.”

Some examples of clusters that are under investigation include:

The majority of new COVID-19 cases continue to be associated with community spread.

Today’s case count of 144 comes after yesterday’s record single-day total of 207, however approximately 114 of Monday’s cases are the result of delayed reporting over the weekend due to private clinical laboratory reporting issues.

Maui Mayor Michael Victorino is enacting several new rules amid record triple-digit single day increases in new COVID-19 cases.  The governor said he would be working with the mayors to reinstate some of the measures that were relaxed in recent weeks.

The Hawaiʻi Board of Education on Thursday night (July 30, 2020) voted to postpone the start of the school year by two weeks to Aug. 17th.  The delay provides assurances that health and safety preparedness concerns relating to COVID-19 are addressed and that there’s enough time for employee training in protocols and virtual learning tools.  The board postponed action on a separate motion that sought to waive the statutory law that requires 180 days of instruction, and will revisit the matter at a later date.