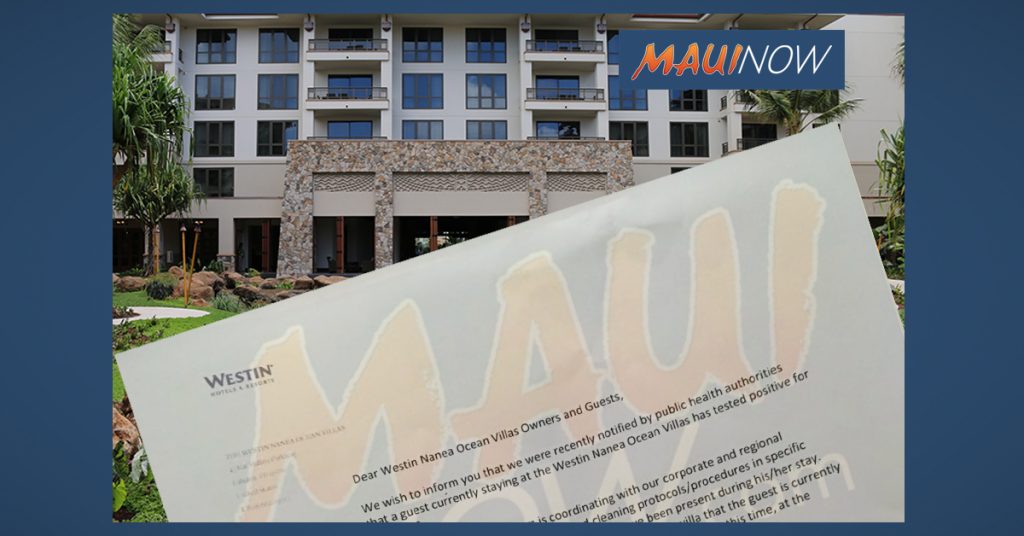 ***Update:  (1 p.m. HST 3.17.20). We received an update from resort executives that the infected individual has not yet been relocated from the resort.  The relocation process is currently underway, but resort executives they are at the mercy of Health officials and could not speculate as to when that transfer would occur and to where.  We were initially told that the transfer had already taken place.

An individual who tested positive for COVID-19 had been a guest at the Westin Nanea Ocean Ocean Villas, a Marriott Bonvoy property located in Kāʻanapali, Maui Now has confirmed.

Edward F. Kinney, Global Vice President of Corporate Affairs and Communications with Marriott Vacations Worldwide Corporation provided us with confirmation this morning saying the resort notified owners and guests of the situation on Monday.

“We are doing everything we can from a protocol standpoint to continue to clean areas throughout the property,” he said.  “We wanted to make sure our guests were informed of the circumstances and we issued the letter to ensure transparency,” said Kinney.

Kinney said extensive protocols are being utilized to ensure that “everything we do for our associates and guests is in accordance with federal and state health entities.”

In a letter to owners and guests, General Manager Chris Raban said the property was recently notified by public health authorities that a guest has tested positive for COVID-19.

He said enhanced cleaning protocols are underway in specific common areas where the guest is known to have been present during their stay.  The letter states that the guest was self isolating at the direction of public health authorities.

Maui Now reached out to the state Department of Health and County of Maui officials and have not heard back yet on the individual’s other itinerary while on island.  We also sought information relating to the Indiana couple on Kauaʻi who had become symptomatic while on Maui, however we have been unable to confirm details surrounding the Maui portion of their stay.

As of 2 p.m. on March 17, 2020 there is a total of 14 confirmed or presumptive positive cases of COVID-19 in Hawai‘i. Four new confirmed cases of COVID-19 were identified: Two on O‘ahu, one on Hawai‘i Island and one on Maui. DOH is gathering more information on these cases.

Case 11 & 12: Two Oʻahu residents who traveled to the Philippines and Japan

Case 10: A visitor to Maui.  Executives with the Westin Nanea Ocean Ocean Villas, a Marriott Bonvoy property located in Kāʻanapali, confirmed that an individual who tested positive for COVID-19 is a guest. The resort notified owners and guests of the situation on Monday.  Plans are to relocate the infected individual to another facility for isolation.

Case 9: An Oʻahu resident. The following message is from Hawaii Pacific Health President & CEO Ray Vara posted to the company’s social media accounts at 8:30 p.m. on Monday, March 16, 2020: “A health care worker at Kapiolani Medical Center for Women & Children has tested positive for coronavirus disease 2019 (COVID-19). The health care worker traveled to the mainland and began experiencing symptoms after returning to Oʻahu, and is currently in self-quarantine. We have been working closely with the Hawaiʻi Department of Health to trace the health care worker’s interactions with any patients and other health care colleagues. This health care worker had no direct patient contact, and employees that had interactions with this worker have been notified. We understand that there will be concern in the community. We are following CDC protocols and procedures and taking every precaution necessary to ensure the health and safety of our patients, visitors and staff.”

Case 8: An Oʻahu resident.  According to Hawaiʻi News Now and the Honolulu Star Advertiser, a Kualoa Ranch employee with no history of out-of-state travel tested presumptive positive for COVID-19 on Sunday night.  During a question and answer portion of a briefing held on Monday, Gov. Ige could not provide specifics on the case, saying information will be shared later as it is received.  He did note that he believes the Kualoa case was one that marks community spread, where the individual was infected along with other family members.

Case 7: An Oʻahu resident returned from a trip to Florida with their entire family on March 8.  The person developed cough, but no fever on March 9.  A specimen was collected on March 10.  The person is self isolating from the rest of the family and is staying in a bedroom with a dedicated bathroom. Other family members have been advised to remain in home quarantine, isolated away from the sick individual.

Case 6: On Saturday evening, March 14, County of Maui officials were informed that the test result for one Person Under Investigation here on Maui was returned positive for Coronavirus or COVID-19. This is the first case for the island of Maui. The female visitor is currently in isolation and continues to be monitored by the state Department of Health. Health officials say the presumptive positive test result came from a private laboratory and is pending confirmation by a certified state public health laboratory. This case involves a flight attendant with Air Canada who is currently on Maui.  Gov. Ige said he believes the individual is a Canadian citizen. Symptom onset began on March 9. The last flight that the flight attendant took was March 8.  “We believe that any risk to any passengers on the previous flight is low,” said Gov. David Ige.  A specimen was collected on March 11.  The individual was exposed to a confirmed case in Germany on March 4. Because of the notification of exposure and symptoms, the flight attendant self isolated at the Royal Lahaina Resort hotel on Maui.  Following the positive result, the individual was moved by AMR to an isolation at a Lahaina clinic.

Case 5: On Saturday evening, March 14, the state Department of health received a presumptive positive test result for COVID-19 for an individual on Oʻahu.  The test result came from a private laboratory and is pending confirmation by a certified state public health laboratory.  This involves at Hawaiʻi resides on Oʻahu. The individual traveled to Colorado from Feb. 29 to March 7. Symptoms began on March 9. A specimen was collected on March 11.  The person and family members have been advised to stay at home and be in self-quarantine.  A child in the home had respiratory symptoms. A specimen was taken from the child and was confirmed to be negative for COVID-19.  The preschool that the child attends was notified that a person in the child’s home tested positive for COVID-19, but there is no risk to children or staff at the pre-school.  The child will not be returning to the preschool until after the quarantine is completed.

Case 3 & 4: On March 13, state officials confirmed that two visitors to the island of Kauaʻi (who had also visited Maui during their stay) tested positive for the coronavirus or COVID-19, becoming the third and fourth presumptive positive tests in Hawaiʻi.  Authorities have since said the couple is originally from Indiana. They stayed at a hotel in Lahaina, Maui from March 2 to 8 before traveling to Kauaʻi. Both sought urgent care while on Maui before flying to Kauaʻi.  At this time, at least three healthcare workers (one on Kauaʻi and two on Maui) have been excluded from work because of possible exposure from the couple.

Case 2: On March 8, DOH tested a second presumptive positive test result for an elderly adult who is hospitalized in serious condition on O‘ahu. The individual felt ill on March 2 in Washington State and traveled home to Honolulu on March 4.

Case 1: The first presumptive positive case was announced March 6. That individual was a passenger on the Grand Princess cruise in Mexico from Feb. 11-21. After arriving in Mexico, the individual traveled home to Honolulu with no symptoms. While home in Honolulu, the individual became ill on March 1, sought medical care and was tested on March 6.