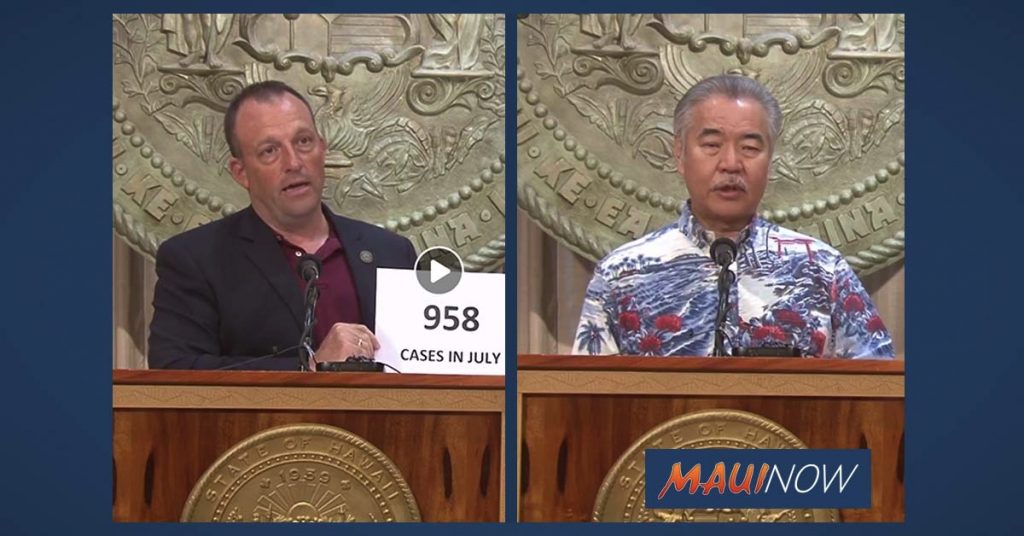 Governor David Ige this afternoon discussed the state’s triple-digit case count today, calling for limits on social gatherings, a look at the potential closure of bars (which has already been requested by Honolulu Mayor Kirk Caldwell), and considering limitations on gatherings at beaches and parks.  (Scroll down to view the entire stream).

“Today we’ve set a new record breaking three digits with 109 new positive cases in the last day. .. I’m very concerned about this surge in cases.  I think we all are. We anticipated this happening and I just want to assure you that our health care system has responded and we continue to have adequate capacity and health care in our islands to deal with this increase in cases; but we need to take action to slow the spread of COVID-19.”

He said summer gatherings are adding to the increased cases that the state is seeing.

“In light of this new surge in cases, I am proposing to the counties and working with all the mayors to reinstate some of the measures that we’ve relaxed over the last few weeks,” said Gov. Ige.

Limit Social Gatherings to No More than 10

First, we’re seeking to limit social gatherings to 10 or fewer.  Kauaʻi has already taken this action.  We continue to say and note that the Department of Education, the University of Hawaiʻi and universities are exempted from these gathering limitations because of the controlled environments and the cohorting and safe prbctiesc that are being implemented at these organizations,” said Gov. Ige.

Gov. Asking Mayors to Re-Look at the Closing of Bars

“Second, I’ve asked all the mayors to re-look at the closing of bars as you are aware, Mayor Kirk Caldwell is looking at closing bars for three weeks and I agree with his request.  We are working with all counties to look at bars and how we might be able to restrict activities that encourage spreading of COVID-19

Working with Counties to Limit Social Gatherings at Beaches and Parks

“We are all responsible for the actions that we take.  I ask you again to take personal responsibility in your social interactions, in everything that you do.  We know that we can only be successful in fighting COVID-19 together as a community.  We all need to redouble our efforts to remain six feet apart from each other; to wear our masks whenever we are in a group setting–both indoors as well as outdoors.  We all need to stay home when we’re sick, wash our hands, and use hand sanitizer.  All of these actions help to fight the spread of COVID-19,” said Gov. Ige.

Discussion on Reopening of Schools: Governor Asks Employers to be Flexible

“We are discussing the reopening of our schools.  We can only be successful if each and every one of is committed to the successful reopening of our schools. I’m asking all employees, employers and organizations to be flexible with those parents who have children in school.  They are going to be in a new normal.  Their students will not be in school every day the school is open.  So I ask all employers to be flexible, to work with your employees who have students in our school system because we will need to work through this together,” said Gov. Ige.

“Never before have we been in a circumstance where what we do affects our neighbors as much–never before,” said Lt. Gov. Josh Green who provided an update on hospital and healthcare preparedness.  He noted that we have 109 new cases today and 624 active cases.

In July, we’ve had 958 cases–that’s more than what the state counted over the first five months of the pandemic, from February to June when Hawaiʻi saw 900 cases.

“So this month has exceeded all the months before it,” said Lt. Gov. Green, “And that’s a reflection very clearly of what the governor pointed out, which is the people have been out and about and our social distancing hasn’t been up to par.  People have not worn masks often enough around others.  That’s why it’s a very wise recommendation that the governor made to go to social gatherings of only 10 or less.  That is absolutely critical.”

The state has 2,273 hospital beds, but can increase that number should a surge occur, according to state officials.  Statewide, there are currently 61 individuals who have COVID-19 and are hospitalized–including six cases from the 109 new cases reported today.  To date, throughout the pandemic, Hawaiʻi has had 167 hospitalizations.  To date, Hawaiʻi has had 26 fatalities–that’s 1.8/100,000, which remains the lowest mortality rate in the nation.

“The expectations are that 11% of every case we diagnose will end up in the hospital; and that out of every 72 cases that we’ve caught with a test, one individual has died,” said Lt. Gov. Green.  “We’ve had this surge now.  Do brace yourself a little bit because the lag is usually two to three weeks with people needing hospitalization and the average length of hospitalization is 10.5 days.”

“Although our laboratory services were temporarily down on Sunday during the hurricane and actually Monday as well with the state lab, that could have affected the numbers, but the actual rate of positive cases has increased in the state and we are seeing more disease spread in our communities,” said state Health Director Dr. Bruce Anderson.

The case count for today stands at a total of 109.  That includes 98 on O‘ahu, nine on Maui, and two on Kaua‘i. A total of 5,160 tests were processed between yesterday and today. State official say that normally, about 1,000-2,000 tests are processed each day.

This comes after record high daily totals reported on Thursday (55), Friday (60) and Saturday (73). There were also 64 cases reported on Sunday, 28 cases on Monday and 47 cases on Tuesday.

“Another high concern is that we’re seeing children being infected by their parents and household members who are positive cases.  Adults are infecting family members, and this is a problem as we work toward the eventual reopening of our schools,” said Dr. Anderson, noting that out of the 109 cases reported today, 23 were juveniles.