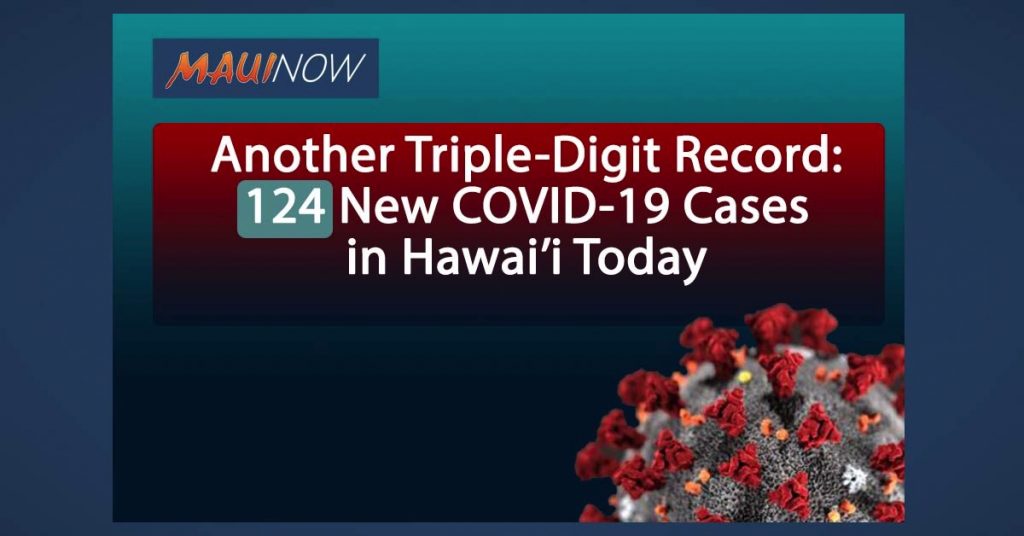 Hawaiʻi recorded another triple-digit record breaking day for new COVID-19 infections with a total of 124 new cases in the state on Thursday.  Today’s cases include: 121 new cases on Oʻahu and four new cases in Maui County.

The state Department of Health reports that as a result of updated information, one case on Hawaiʻi island was recategorized to Oʻahu.

This marks the second consecutive day that new cases have risen into the triple-digits.  It’s also the state’s highest case count for a single-day since the pandemic began.

This comes after record high daily totals reported on Thursday (55), Friday (60) and Saturday (73). There were also 64 cases reported on Sunday, 28 cases on Monday, 47 cases on Tuesday and 109 cases on Wednesday.

In Maui County, cases with onset in the last 28 days have been in all areas of Maui Island except for the East Maui zip code of 96713.  Of the 167 cases documented in Maui County over the course of the pandemic, Wailuku, Kahului and Lahaina had the most cases (more than 20 cases each); followed by Kīhei (11-20 cases); Makawao, Spreckelsville, Kula and Haʻikū (6-10 cases); and Hāna and Molokaʻi (1-5 cases each).

Maui Mayor Michael Victorino will be making several recommendations amid record triple-digit single day increases in new COVID-19 cases.  While state officials said yesterday’s increase was anticipated, the governor said he would be working with the mayors to reinstate some of the measures that were relaxed in recent weeks.

Mayor Victorino’s recommendations on Maui include the following:

The Hawaiʻi Board of Education will review a proposal TODAY at 1 p.m. that seeks to move the start date for students from the previously announced Aug. 4 date to Aug. 17 instead.

The state Department of Education had previously announced plans to re-opening classrooms in August for the Fall semester.  Schools have three options to choose from: fully reopen with every student on campus for in-person instruction; come in on a rotating schedule with students doing both distance learning and in-person instruction; or do a full distance learning program. State School Superintendent Christina Kishimoto said models for individual schools are determined by the principals of respective schools.