Douglas has maintained its Category 1 status with 90 mph sustained winds, according to the latest 8 p.m. update from the Central Pacific Hurricane Center.  The system is now 295 miles ESE of Kahului, Maui and 390 miles ESE of Honolulu.  According to the latest imagery produced by the CPHC, a portion of South Maui is no longer included in the cone of uncertainty; however forecasters urge the public not to focus too much on the forecast track.

“We can’t over emphasize enough that the exact track continues to have some uncertainty; and so a slight change in the forecast track would bring direct impact and landfall across any of the Hawaiian Islands, especially ones that are very close to the track,” said Chris Brenchley, Director of the Central Pacific Hurricane Center.

Maui County remains under a Tropical Storm Warning and a Hurricane Watch.

John Bravender with the Central Pacific Hurricane Center described the potential impacts in Maui County saying, “I believe it’s going to pass, I’d say a little too close for comfort to Maui.  One of the concerns with it (we’ve talked about a lot of the hazards.  The first thing to increase will be the large surf–damaging surf possibly causing coastal erosion problems; building tonight and Sunday into the peak.”

The forecast track of Douglas takes it just north of Oahu–that’s the precise forecast track,” said Robert Ballard, Science and Operations Officer with the Central Pacific Hurricane Center.  “But it’s important to remember that at 36 hours we typically have about 55 miles of track error–that’s wider than the island of Oahu.  So, Oahu is about 30 miles across.  If you drive from the south shore to the north shore.  So we can’t say, and I would really stress that–you cannot say that one part of the island is safer than the other at this point.  Any part of the islands could experience direct impacts from Maui up to Kauai and Niihau. Anybody could get impacts from this system as it comes through.”

The closest point of approach for Maui is at around 1 p.m. tomorrow, bringing a heavy rain threat and potentially damaging winds.

Updates with this Advisory:

Since the last update, a Tropical Storm Warning was issued for Kauai County, including the islands of Kauai and Niihau.  A Tropical Storm Watch has been issued for portions of the Papahanaumokuakea Marine National Monument from Nihoa to French Frigate Shoals.

Below are forecast highlights courtesy of the Central Pacific Hurricane Center:

This motion is expected to continue through the next couple of days. On the forecast track, Douglas will be near the main Hawaiian Islands late tonight and is expected move near, or over, parts of the state Sunday and Sunday night.

Maximum sustained winds are near 90 mph with higher gusts. Gradual weakening is expected over the next couple of days. However, Douglas is still forecast to be near hurricane strength when it passes near the islands.

SURF: Large swells generated by Douglas are expected to build tonight and affect the Hawaiian Islands Sunday into Monday, and storm surge of 2 to 4 feet above normal tides is expected near the center of Douglas. The large swells and surge will produce life threatening and potentially destructive surf along exposed shores.

RAINFALL: Heavy rainfall associated with Douglas is expected to affect portions of the main Hawaiian Islands from late tonight into Monday. Total rain accumulations of 5 to 10 inches are possible from Maui County westward to Kauai County, with the greatest amounts in elevated terrain. This rain may result in life-threatening flash flooding and land slides, as well as rapid water level rises on small streams. Douglas could produce 2 to 5 inches of rainfall over the northern half of the Big Island.

*An intermediate advisory will be issued at 8 p.m; and the next complete advisory is due out at 11 p.m. 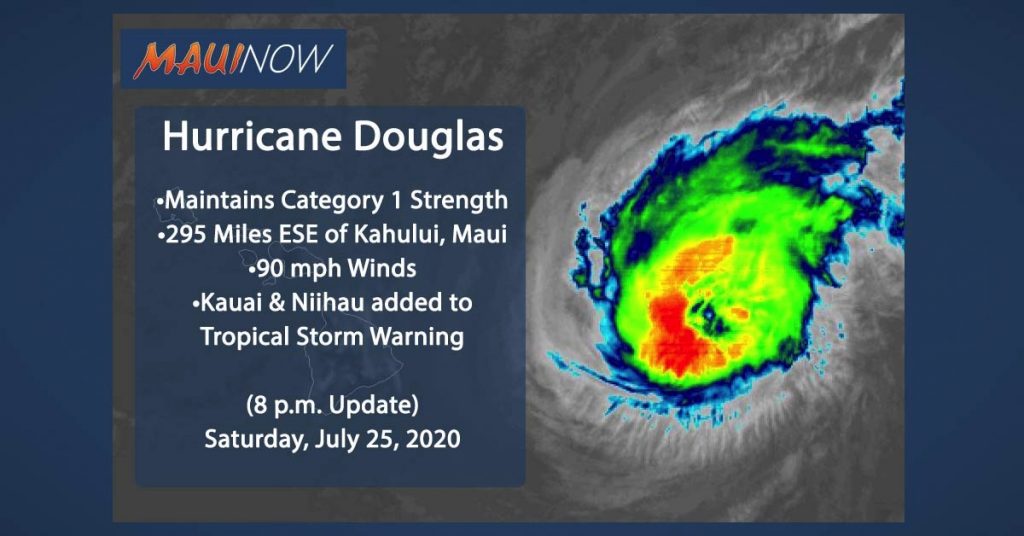 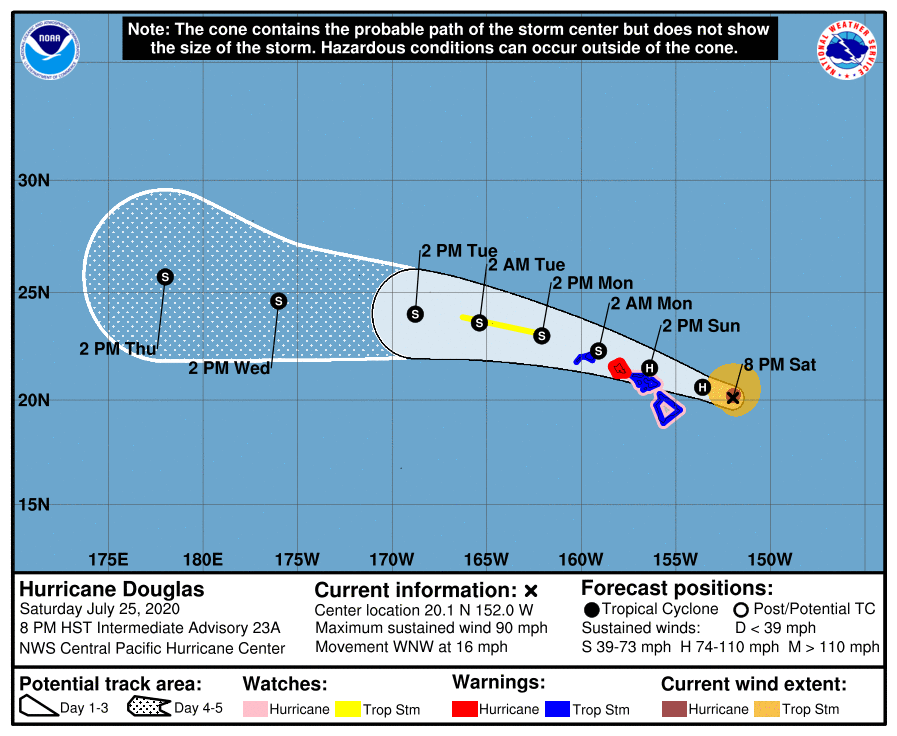 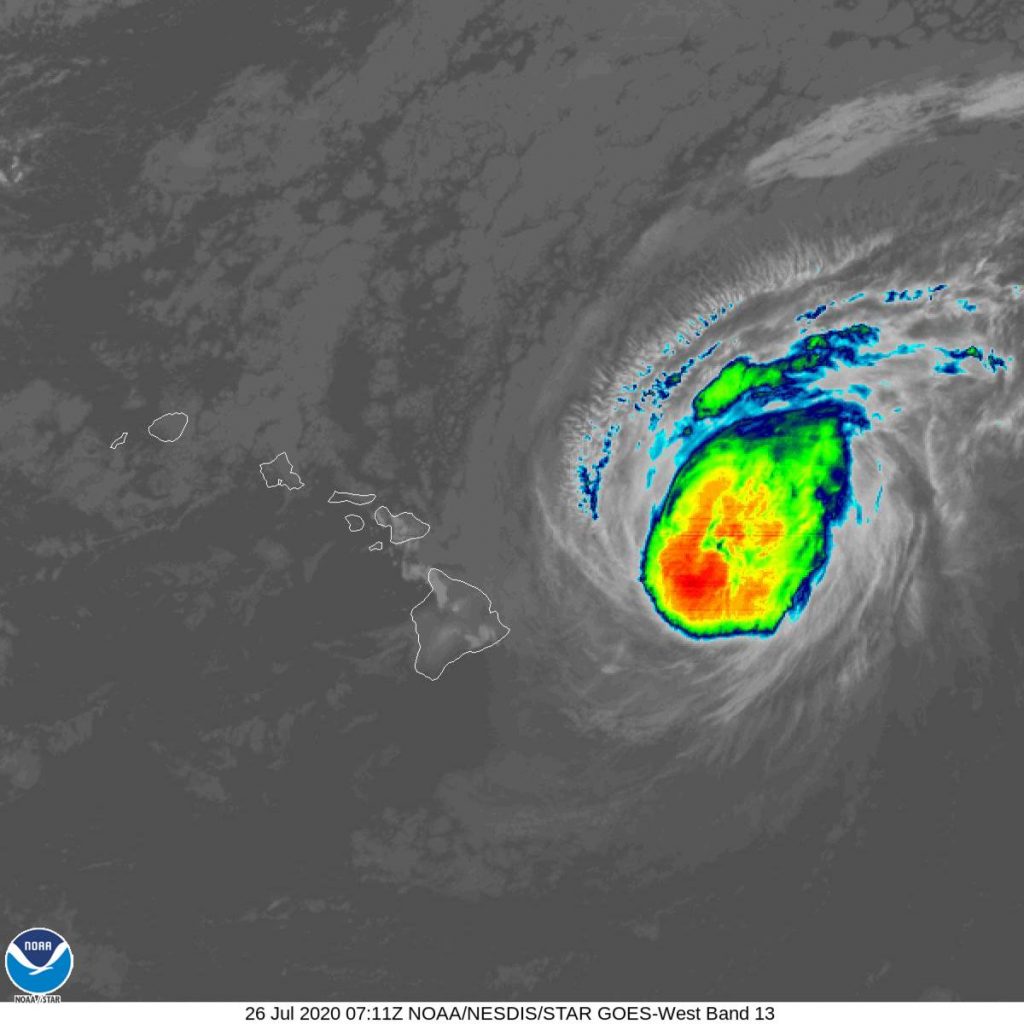 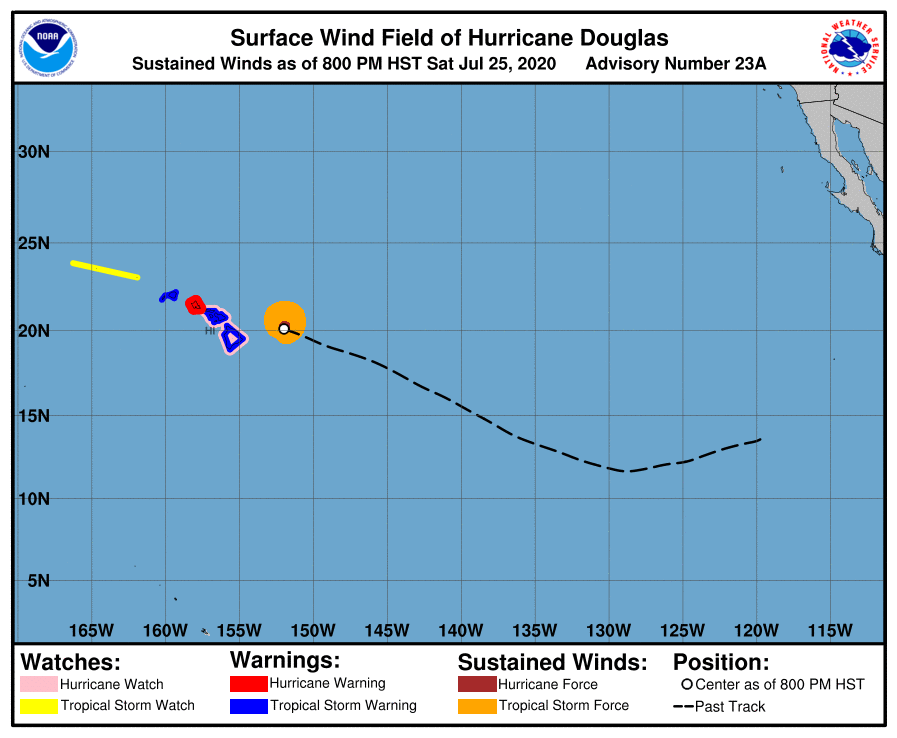 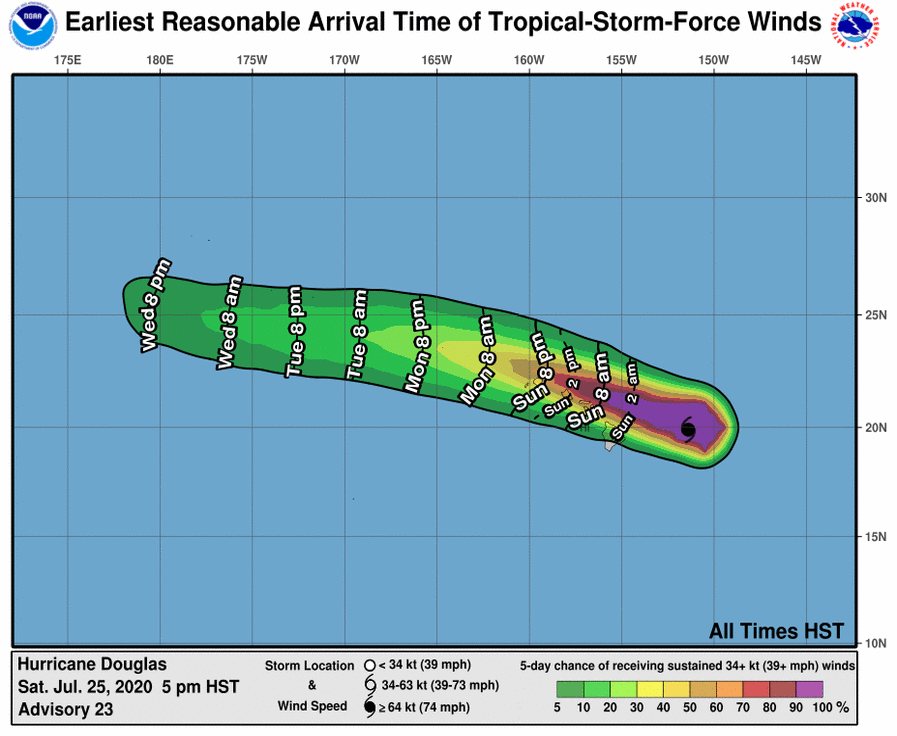