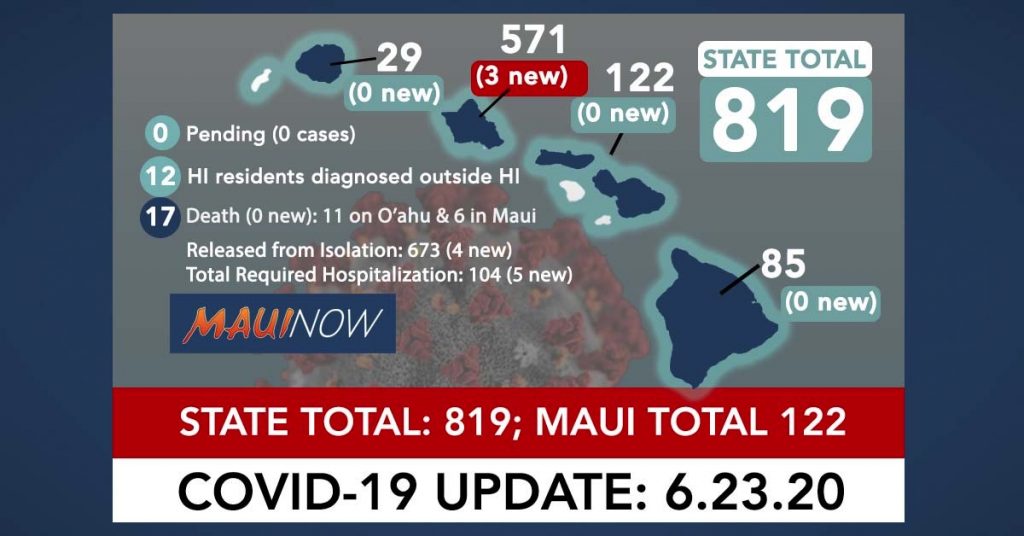 There are three new COVID-19 case reported in Hawaiʻi today–all of them on Oʻahu–pushing the statewide count to 819 cases in Hawaiʻi over the course of the pandemic.

Three Honolulu adults are the latest cases of coronavirus reported by state Department of Health. One of the cases is linked to a previously confirmed case and two are pending further investigation.

To date, 673 people (83.9%) have recovered including 113 in Maui County. There are currently 129 active cases in the state, including three on Maui.

The Hawaiʻi State Department of Health reports that there were 673 individuals released from isolation; and 104 cases (13%) that have required hospitalization. A total of 750 patients (92%) were residents.

A separate quarantine in place for interisland travel was lifted on Tuesday, June 16.  This applies only to air travel within the state, and anyone arriving into the state would still be subject to a 14-day quarantine through at least the end of July.  As the state lifts the interisland quarantine, it has implemented rexzthermal screening, a new interisland travel form and a more robust contact tracing program.