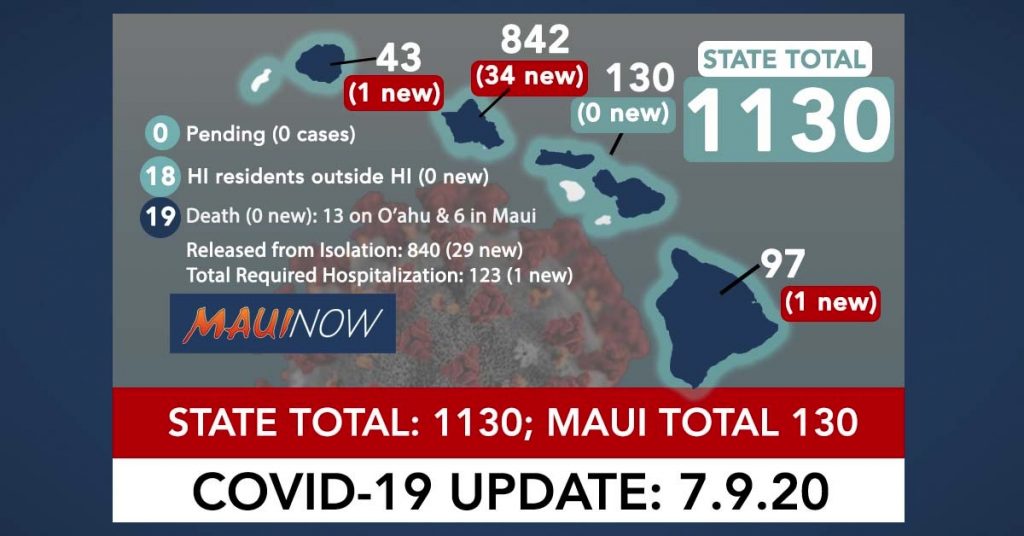 There are 36 new COVID-19 cases reported for Hawaiʻi today, including–34 new cases on the island of Oʻahu, and one each on Kauaʻi and Hawaiʻi Island.  This brings the statewide count to 1,130 cases in Hawaiʻi over the course of the pandemic.

The Hawaiʻi State Department of Health reports that there were 840 individuals released from isolation; and 123 cases (11%) that have required hospitalization. A total of 1,036 patients (92%) were residents.

In Maui County, cases with onset in the last 28 days have been in the Lahaina, Makawao, Kīhei and Wailuku zip codes.  Of the 130 cases documented in Maui County over the course of the pandemic, Wailuku, Kahului and Lahaina had the most cases (more than 20 cases each); followed by Kīhei (11-20 cases); Makawao and Spreckelsville (6-10 cases); and Kula, Hāna, Haʻikū and Molokaʻi (1-5 cases each).

Statewide, close to 90,000 tests have been conducted with 98.8% returning negative.
Statewide less than half of ICU beds are in use and 14% of ventilators are in use.