The Hawai‘i Department of Health is reporting  87 new positive COVID-19 cases diagnosed on O‘ahu today for a cumulative total of 2,197 cases in the state, reported since March.

State officials say that while this number is encouraging and lower than previous days, it also reflects a significant lag in the testing results. With many test specimens now being sent to mainland labs for processing, reporting of test results is delayed 5-7 days. This delay may make case numbers appear lower than actual disease activity.

“Many of the cases reported recently are associated with social gatherings,” said Health Director Bruce Anderson.

This month, multiple cases have been associated with a yoga class, fire station, funeral events, gyms, socializing at bars, and training events. Infections have been traced to workplaces including but not limited to a construction company and site, non-patient care areas of hospitals, social service organizations, nursing and care homes, retail establishments, warehouse and delivery businesses.

“Everyone should avoid close contact with others outside of their household members, crowded places, and large gatherings. Act as if everyone around you has the virus and can spread it,” said Anderson.

The DOH strongly encourages wearing of face masks, physical distancing and most importantly, staying at home and separated from others to prevent exposing them when sick.

To protect the privacy of individuals, DOH does not release detailed information on its investigations unless there is an imminent risk to the public. 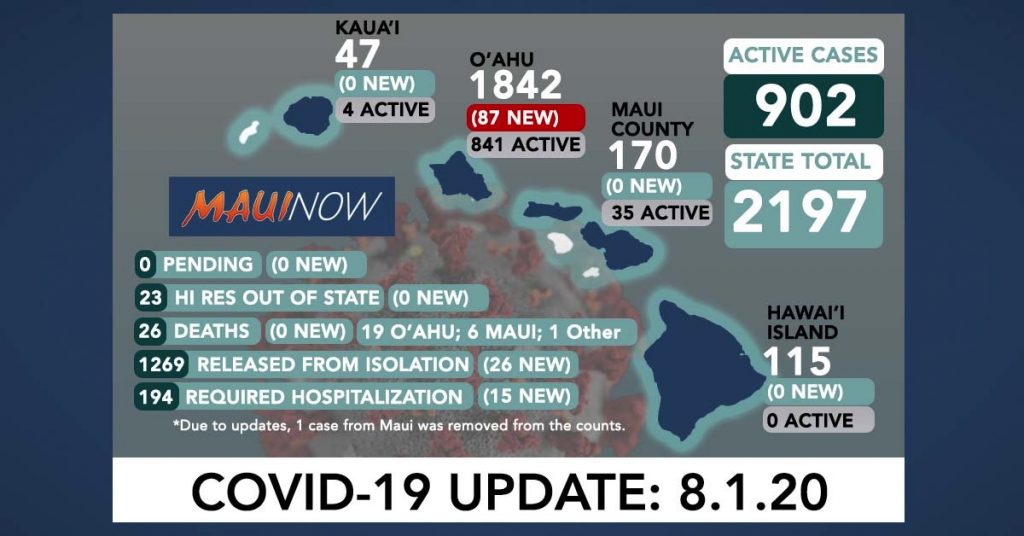 The case count today was 87 news cases, all on Oʻahu.  This comes after Friday’s 123 cases, which marked the third consecutive day that new cases have risen into the triple-digits.  The state set a record for its single-day numbers on Thursday with 124 new cases.  There ere also 109 new cases on Wednesday across the state.

In Maui County, cases with onset in the last 28 days have been in all areas of Maui Island except for the rural areas of East Maui, Molokaʻi and Lānaʻi.  Of the 171 cases documented in Maui County over the course of the pandemic, Wailuku, Kahului and Lahaina had the most cases (more than 20 cases each); followed by Kīhei (11-20 cases); Makawao, Spreckelsville, Kula and Haʻikū (6-10 cases); and Hāna and Molokaʻi (1-5 cases each).

The Hawaiʻi Board of Education on Thursday night (July 30, 2020) voted to postpone the start of the school year by two weeks to Aug. 17th.  The delay provides assurances that health and safety preparedness concerns relating to COVID-19 are addressed and that there’s enough time for employee training in protocols and virtual learning tools.  The board postponed action on a separate motion that sought to waive the statutory law that requires 180 days of instruction, and will revisit the matter at a later date.