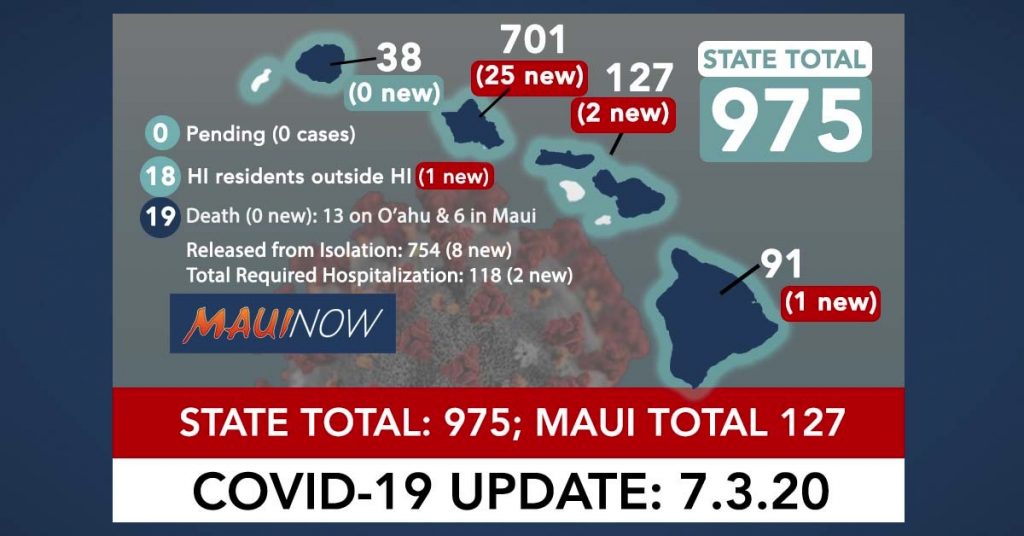 There are 29 new COVID-19 case reported for Hawaiʻi today–25 on the island of Oʻahu, two on Maui, one on the Big Island of Hawaiʻi and one case that was diagnosed out-of-state–bringing the statewide count to 975 cases in Hawaiʻi over the course of the pandemic.

Also today, the state Department of Health confirmed the 19th COVID-19 related death in Hawaiʻi in an elderly patient on O‘ahu who was hospitalized with multiple underlying health issues.

The Hawaiʻi State Department of Health reports that there were 754 individuals released from isolation; and 118 cases (12%) that have required hospitalization. A total of 894 patients (92%) were residents.

In Maui County, cases with onset in the last 28 days have been in the Lahaina and Makawao zip codes.  Of the 125 cases documented in Maui County over the course of the pandemic, Wailuku and Kahului had the most cases (21-70 each); followed by Lahaina and Kīhei (11-20 each); Makawao and Pāʻia (6-10 cases); and Kula, Hāna, Haʻikū and Molokaʻi (1-5 cases each).