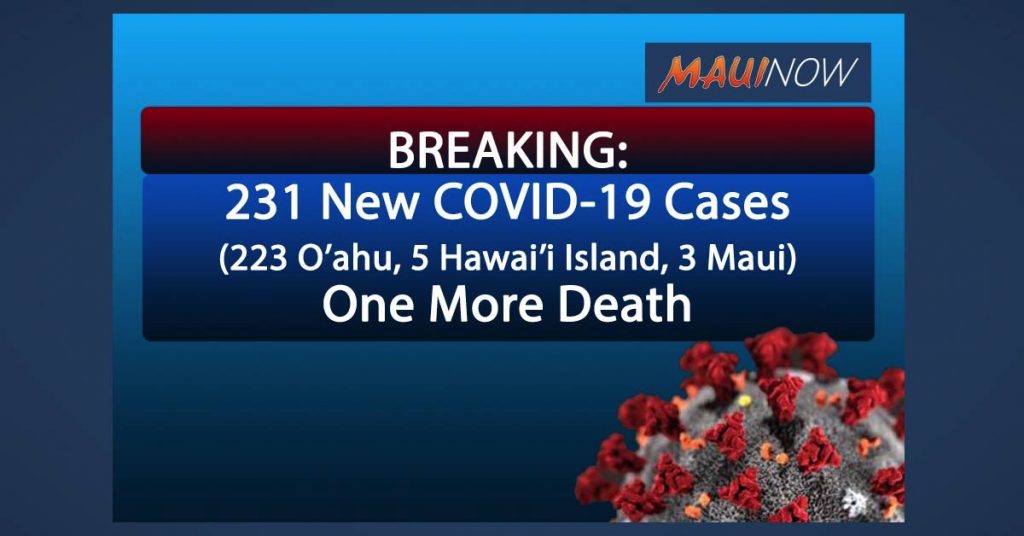 The state Department of Health is reporting 231 newly diagnosed positive cases of COVID-19 today, with 223 on O‘ahu, five on Hawai‘i Island and three on Maui.

Today, the Health Department also reports the death of an O‘ahu man, older than 60, who passed away yesterday. His death is being recorded as the 31st since the pandemic began.  (A previously reported death, of an elderly O‘ahu female on Aug. 5, has been removed from the tally. Her attending physician assessed she likely died from an underlying condition).

Also, an employee of a Honolulu gentleman’s club, who was sick, worked at a different club than the one originally identified by the Hawai‘i Department of Health. The clarification about the identification of the club came into DOH leadership after-hours on Friday and department officials say they regret the error. DOH is attempting to identify the club where the worker danced on July 25th as health investigators have been unable to identify all close contacts who potentially could have been exposed to COVID-19.

State Epidemiologist Dr. Sarah Park said, “Given that people may be infectious before they recognize they have symptoms, anyone who visited the dance club between the 23rd and 25th of last month should contact their healthcare provider, especially if they have symptoms, as they potentially could have been exposed to COVID-19.” https://www.cdc.gov/coronavirus/2019-ncov/symptoms-testing/symptoms.html)

Health Director Bruce Anderson again extended the sympathies of everyone in Hawai‘i to the family and friends of the 31st person to die from coronavirus in the state, since the beginning of the pandemic in late February.  “Unfortunately, with the dramatic surge in cases, we can expect more deaths in the coming weeks,’ said Anderson.  Hospitals throughout O‘ahu are transferring patients and opening up new specialized COVID units to handle the surge in patients that is expected over the next couple of weeks.”

“Actions taken by the County to limit large, uncontrolled gatherings in public places and prohibit high risk activities should help prevent some of the spread of COVID, but that will not be enough. It is up to all of us to take responsibility for curtailing the spread of this deadly virus.  That can only be done if we all avoid close contact with others, crowded places, and wear masks, when physical distancing cannot be reliably accomplished. This weekend and next weekend would really be a good time to simply stay at home,” said Anderson. 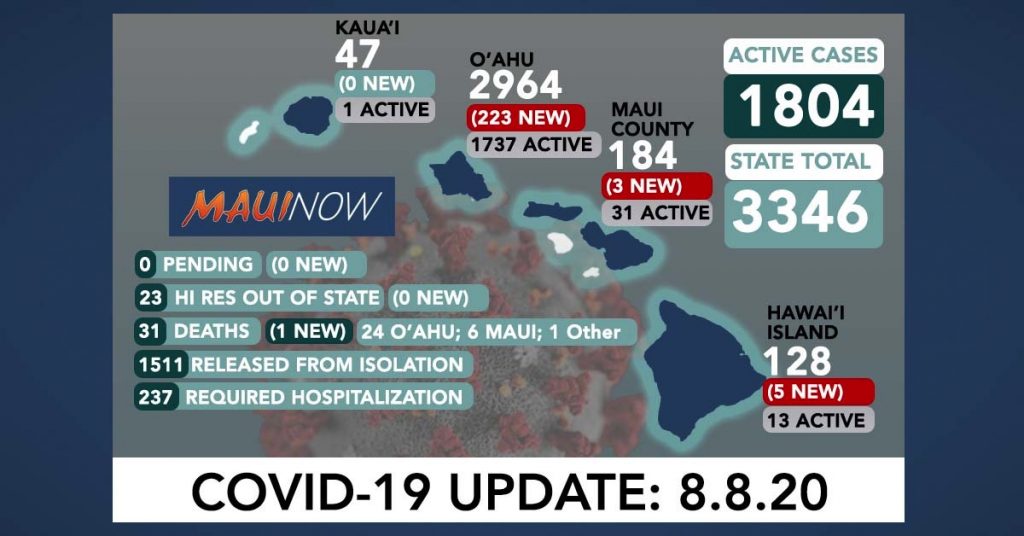 There were 2,698 additional COVID-19 tests reported via electronic laboratory reporting.  So far, there have been 141,944 total individuals tested by Clinical and State Laboratories.  Of that number, 3,346 were positive, 138,579 were negative, and 19 test results were inconclusive.

Previous case counts include the following: