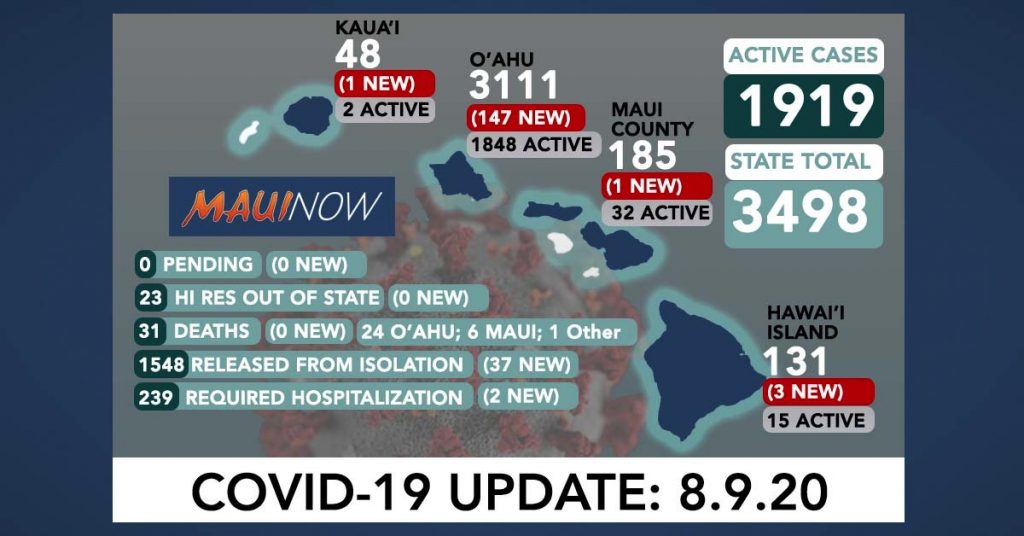 Hawai‘i has recorded another triple-digit day for new COVID-19 cases in the state. The state Department of Health is reporting 152 newly diagnosed positive cases of COVID-19 today, with 147 on O‘ahu, three on Hawai‘i Island and one each on Maui and Kauaʻi.

The Hawaiʻi State Department of Health reports that there were 239 cases (7%) that have required hospitalization.  At least 3,270 (93%) patients were residents.

In Maui County, cases with onset in the last 28 days have been in all areas of Maui except for Hāna (96713), Kula (96790) and the rural outlying islands of Lānaʻi and Molokaʻi.  Of the 184 cases documented in Maui County over the course of the pandemic, Wailuku and Kahului had the most cases (31-60 cases each); followed by Lahaina, Kīhei, Kula, Makawao, Spreckelsville and Haʻikū (6-30 cases each); and Hāna and Molokaʻi (1-5 cases each).

There were 2,698 additional COVID-19 tests reported via electronic laboratory reporting on Saturday.  As of Aug. 8, there have been 141,944 total individuals tested by Clinical and State Laboratories.  Of that number, 3,346 were positive, 138,579 were negative, and 19 test results were inconclusive.

Out-of-State Arrivals: On Monday, July 13, Gov. David Ige announced he is delaying the launch of the state’s pre-travel testing program by a month to Sept. 1, 2020. He also announced the extension of Hawai‘i’s 14-day quarantine on trans-Pacific travel to the end of August.  This quarantine for out-of-state arrivals into Hawaiʻi remains in effect unless terminated or extended by a separate proclamation.