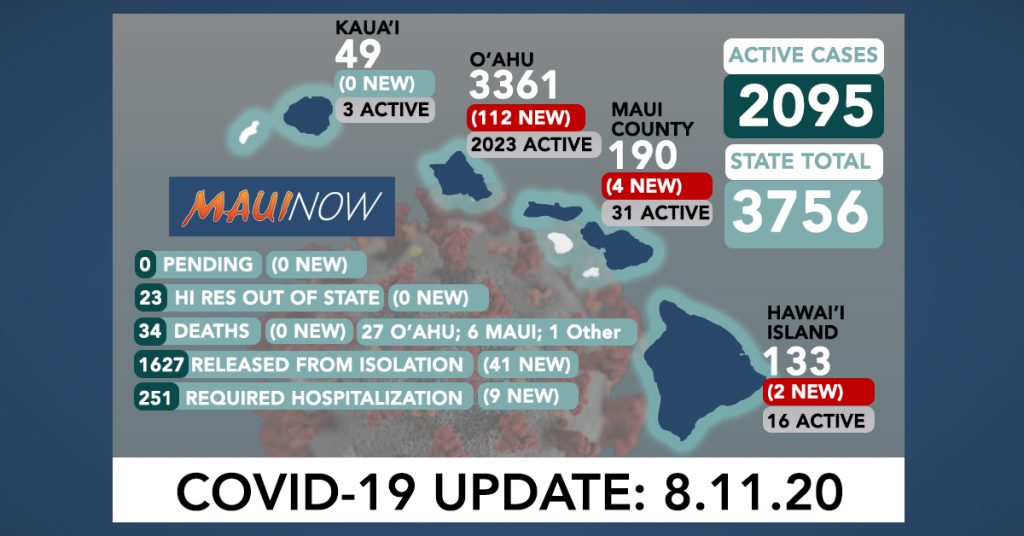 The state has reported another triple digit increase in new COVID-19 cases with 118 new cases today including 112 on Oʻahu, three on Maui and one on Hawaiʻi Island.  Twelve of the past 14 days have been in the triple-digits for new cases in the state.   More than 96% of the active cases statewide are on the island of Oʻahu.

The Hawaiʻi State Department of Health reports that there were 251 cases (7%) that have required hospitalization.  At least 3,523 (94%) patients were residents.

In Maui County, cases with onset in the last 28 days have been in all areas of Maui except for Hāna (96713), and the rural outlying islands of Lānaʻi and Molokaʻi.  Of the 190 cases documented in Maui County over the course of the pandemic, Wailuku, Kahului and Haʻikū had the most cases (6-30 cases each); followed by Lahaina, Kīhei, Kula, Makawao and Spreckelsville (1-5 cases each); and Hāna. Molokaʻi and Lānaʻi (0 cases).

Mayor Wants Distance Learning on Maui for First Four Weeks of School: Mayor Victorino said he’s asking the Governor to implement a similar distance learning approach as the one approved on Oʻahu for the first four weeks of the school year.