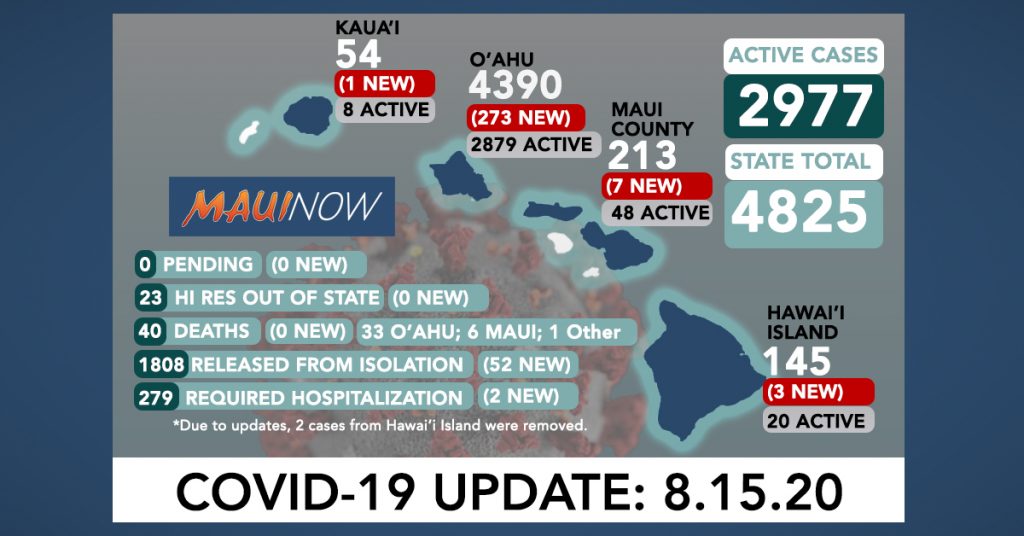 The state has reported another triple digit increase in new COVID-19 cases with 284 new cases today including 273 on Oʻahu, seven on Maui, three on Hawaiʻi Island and one on Kauaʻi.  This marks the fourth consecutive day that the daily count has exceeded 200, with a record breaking 355 cases reported on Thursday.  More than 96% of the active cases statewide are on the island of Oʻahu.

The Hawaiʻi State Department of Health reports that there were 279 cases (6%) that have required hospitalization.  At least 4,241 (93%) patients were residents.

In Maui County, cases with onset in the last 28 days have been in all areas of Maui except for Hāna (96713), and the rural outlying islands of Lānaʻi and Molokaʻi.  Of the 213 cases documented in Maui County over the course of the pandemic, Wailuku, Kīhei, Kahului, Makawao and Haʻikū had the most cases (6-30 cases each); followed by Lahaina, Kula and Spreckelsville (1-5 cases each); and Hāna. Molokaʻi and Lānaʻi (0 cases).

Partial Reinstatement of Interisland Quarantine: Maui County residents are reminded that the Governor has reinstituted the mandatory 14-day quarantine for any travel between islands other than arrival on Oʻahu. The quarantine includes travel from Maui to Hawaiʻi Island or Kauaʻi, as well as travel to and from Molokaʻi and Lānaʻi.  This remains in effect through Aug. 31, unless terminated or extended by a separate proclamation.

Restrictions Mulled Amid Record Breaking Increase: Amid record breaking new COVID-19 cases on Thursday, Aug. 13, Gov. Ige said, “if things do not get better, we will have no choice but to look at more restrictions. This could include going back to the stay-at-home orders. It also means that we may have to delay trans-Pacific travel. I know that going backwards will cause further harm to our economy, but we may have no choice. Before we can fix our economy, we need to fix our health. I know you’re frustrated. Everyone wants our lives to return to normal. You have sacrificed so much, and I am asking you to sacrifice even more. Remember that taking personal responsibility is still the best way to fight COVID-19. You all know what to do. Wash your hands, wear your mask, avoid large gatherings and stay home if you feel sick.”

Oʻahu Public Schools on Complete Distance Learning for First 4 Weeks: Public schools on Oʻahu will go to complete distance learning for students for the first four weeks of the new school year.  Schools will start on Oʻahu on Aug. 17 as previously announced. 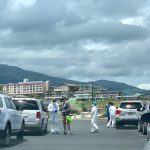 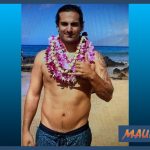 ARTICLE COMMENTS ( 32 )
This comments section is a public community forum for the purpose of free expression. Although Maui Now encourages respectful communication only, some content may be considered offensive. Please view at your own discretion.
I Understand, Show Comments