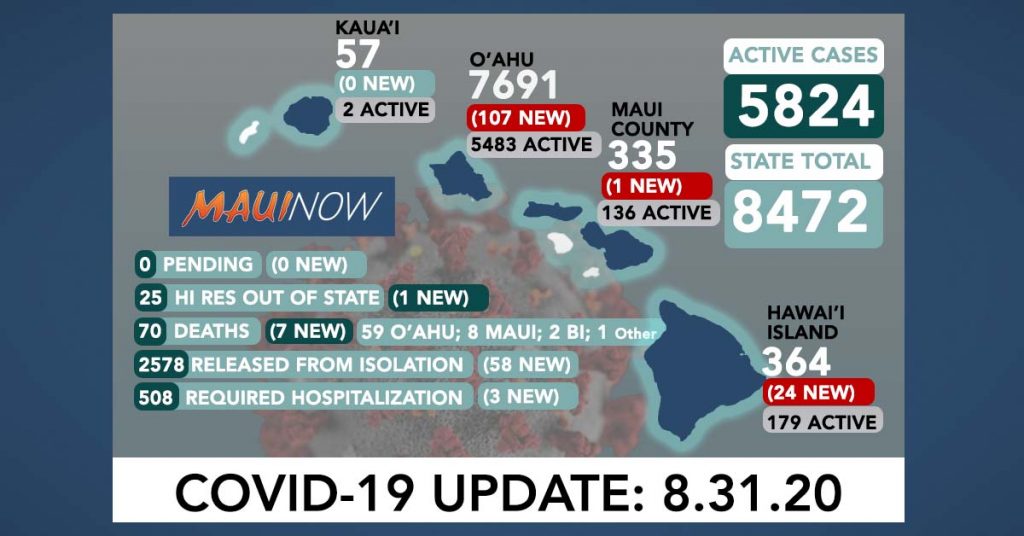 There were 133 new COVID-19 cases in Hawai‘i today including 107 on O‘ahu, one on Maui and 24 on Hawai‘i Island and one resident out of state.

Maui has one additional cases for a cumulative total of 335. Clusters on Maui include at least 27 cases at the Roselani Place assisted living facility and 66 associated with the Maui Memorial Medical Center.

Hawai‘i island has 24 new cases today for a cumulative total of 364 since the start of the pandemic.

To date, there have been 70 COVID-19 related deaths in Hawaiʻi, including 59 on Oʻahu, eight in Maui County, two on Hawaʻii Island and one Kauaʻi resident who was hospitalized in Arizona. Hawaiʻi’s mortality rate yesterday was 4.5 deaths per 100,000, according to Lt. Gov. Green. Scroll down for a list of prior COVID-19 related deaths.

In Maui County, cases with onset in the last 28 days have been in all areas of Maui except for the rural outlying island of Lānaʻi. The East Maui community of Hāna is no longer absent of cases according to current maps.  Of the 335 cases documented in Maui County over the course of the pandemic, Kahului and Wailuku have the most cases (51-150); followed by Lahaina, Makawao and Kīhei (26-50); Haʻikū, Kula, Spreckelsville, Molokaʻi, Hāna and Lānaʻi (1-25 cases each).

US Surgeon General Jerome Adams explained via a social media message published by Lieutenant Governor Josh Green, that the positivity rate is the percentage of tests that come back positive over the percentage of tests done.  Thursday’s 306 new positive cases divided by 2478 tests conducted that day means the state’s positivity rate on Thursday had reached 12.35%.  With 200 new cases and 2,784 tests conducted today, the rate has dropped down to 7.2% for Sunday.  He further explained that if the positivity rate is less than 5%, that’s considered good or in the green; if its in the 5-10% rate, it’s in the yellow; and if its over 10% you’re in the red.

Stay-At-Home, Work-From-Home Order Reinstated on O‘ahu for Two Weeks Starting Aug. 27:  Governor David Ige  approved Honolulu Mayor Kirk Caldwell’s request for a stay-at-home, work-at-home order for the island of Oʻahu. Mayor Caldwell said the order goes into effect at midnight 12:01 a.m. on Thursday, Aug. 27, and continues for two weeks.  This does not impact the neighbor islands, which remain at their current levels of response.

This is on top of Mayor Caldwell’s “Act Now Honolulu – No Social Gatherings.” , which calls for no parties larger than five individuals coming together on Oʻahu. The Act Now Honolulu phase went into effect on Aug. 19, 2020 and will run for 28 days or two incubation periods.

Delayed Launch of Pre-Travel Testing: On Tuesday, Aug. 18, Gov. David Ige announced the delayed launch of the state’s pre-travel testing program by another month to Oct. 1, 2020 at the earliest. The quarantine for out-of-state arrivals into Hawaiʻi remains in effect unless terminated or extended by a separate proclamation.

Maui Mayor Mulls Restrictions: Maui Mayor Michael Victornio is looking at potential reinstatement of restrictions in Maui County with a focus first on gatherings if Maui’s COVID-19 community response does not improve.  On Monday, Aug. 24, Mayor Victorino said he he needs another day or two to make any decisions on whether or not to reinstate previous restrictions aimed at helping to contain the spread of the COVID-19 virus.

Partial Reinstatement of Interisland Quarantine: Maui County residents are reminded that the Governor has reinstituted the mandatory 14-day quarantine for any travel between islands other than arrival on Oʻahu. The quarantine includes travel from Maui to Hawaiʻi Island or Kauaʻi, as well as travel to and from Molokaʻi and Lānaʻi.  This remains in effect, unless terminated or extended by a separate proclamation.